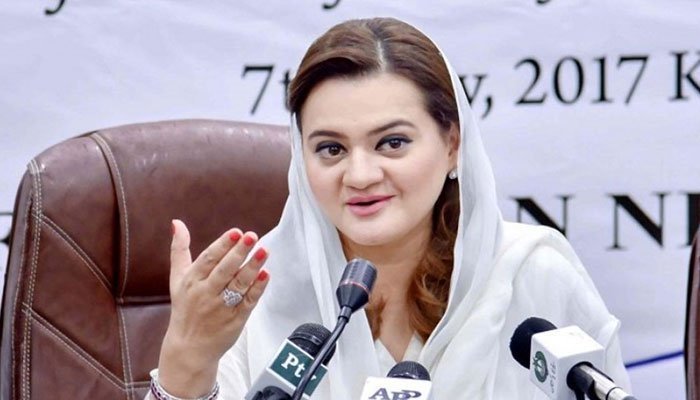 ISLAMABAD: Pakistan Muslim League-N Information Secretary Marriyum Aurangzeb has demanded that all schools and colleges must be shut down due to currently severe heatwave and electricity load-shedding.

In a statement, she said that Imran Khan and his team were punishing the children of Pakistan for his corruption, incompetence and mismanagement. She said former Prime Minister Nawaz built more supply capacity than the demand for electricity.

She said the current power load-shedding is a result of total lack of planning, severe mismanagement and theft of Imran mafia. She said innocent little children were fainting due to the blunders of this government.

The former Information Minister said the Imran mafia first raised the price of a commodity and then creates its shortage. She said, “the Imran ‘mafia’ increased sugar price from Rs 52 to Rs 120 but it was still marred by shortage; flour went from Rs 35 to Rs 90 and yet it was nowhere to be found, in the same vein after raising electricity tariffs to historic highs, there is no electricity available under the corrupt PTI government.”

Marriyum questioned were the children Imran and his ministers going to school in 43 degree Celsius without electricity. She said they relax in load-shedding free air conditioned cool environment while the rest of the nation’s children swelter in scorching heat in schools without even a fan.

The PMLN leader said the people were deprived of sugar, flour, medicines and now electricity in the so-called New Pakistan of Imran Khan. She said the mafia government cannot stop looting the nation in every way it pleases. She questioned why was the 22600 megawatt demand was not being met when the PTI government had admitted that there is installed capacity of 23116 megawatts.

All this despite the corrupt government raising electricity tariff from Rs 11 to Rs 19 per unit, she added. She pointed out that PTI had also escalated the circular debt from Rs 1159 billion to Rs 25 billion. These corrupt and incapacitated PTI also staggered the renovation of transmission and distribution that was underway during PMLN government, she pointed out.