What’s in a slap? France ponders meaning of Macron assault 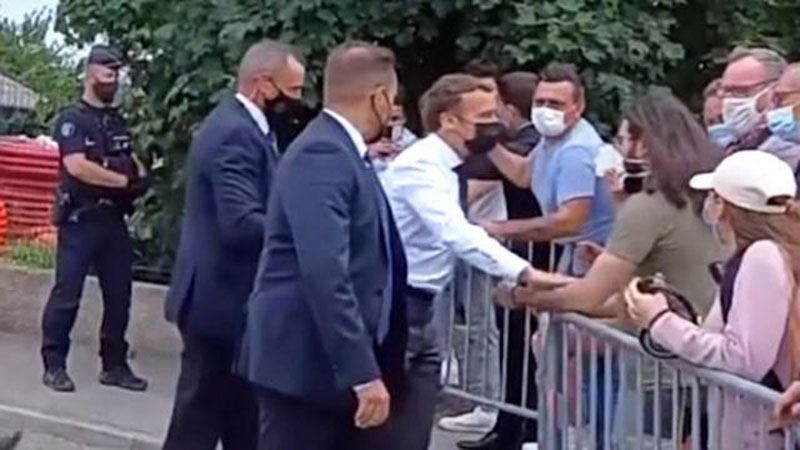 French President Emmanuel Macron has vowed to continue greeting crowds during his travels despite being slapped in the face, sparking debate Wednesday about whether such walkabouts are wise in a fraught political climate and what the assault symbolised for the country.

Macron shrugged off being struck across the face on Tuesday in the village of Tain l’Hermitage, calling it an “isolated event”, and he defiantly fistbumped onlookers later in the day in the nearby town of Valence.

On Wednesday, he returned to work in the safety of the Elysee Palace in central Paris as politicians and experts sought to interpret an incident that has been condemned across the political spectrum.

Economy Minister Bruno Le Maire saw the slap as a symptom of “the long deterioration of public debate” while other commentators flagged the danger of new violent protests emerging.

Macron remains a highly divisive figure whose presidency was rocked by anti-government “yellow vest” protests in 2018-2019 which were driven in part by the former investment banker’s abrasive personality.

Veteran political commentator Pascal Perrineau saw “a sign of the return of extremely hot anger” which had been “frozen” by the Covid-19 pandemic of the last 15 months.

Pollsters were wary about trying to predict the electoral impact of a blow that Prime Minister Jean Castex equated to a strike against French democracy.

Violent crime is one of the chief concerns of French voters ahead of regional elections in a fortnight and presidential polls in April and May next year.

Macron is widely expected to seek a second term , with polls currently giving him a narrow lead over far-right leader Marine Le Pen.

Le Pen has warned that re-electing Macron would lead to “chaos”.

Other rivals, including right-winger Xavier Bertrand, have pitched themselves as better placed to unify the country.

But the assault could help Macron if voters credit him with personal bravery and a willingness to engage with voters — helping dispel criticism from opponents who paint him as aloof and arrogant.

“It’s an event that will leave a mark, but it’s difficult to say what it will be,” Bruno Jeanbart from the OpinionWay polling company told AFP.

Macron’s assailant, a 28-year-old man identified as Damien T., remained in police custody on Wednesday and is expected to be charged with assaulting a public figure, an offence that carries a maximum three-year prison term.

French media raked over his social media pages, looking for clues to the political sympathies of a man known mainly for his love of medieval martial arts and board games.

AFP noted he was a subscriber to several far-right YouTube channels.

Popular evening talkshow Le Quotidien aired footage of one of its journalists meeting Damien T. and friends earlier in the day on Tuesday.