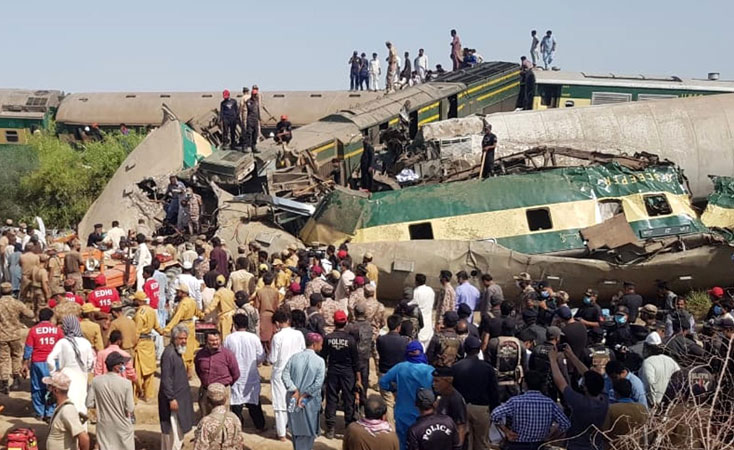 The death toll in Ghotki train tragedy rose to 63 on Tuesday morning as rescuers retrieved eight more bodies from the wreckage.

The collision occurred when Karachi-to-Sargodha Millat Express derailed near Daharki and as a result, bogies fell on the other track. The accident would have been averted had the railways issued an alert warning halting trains on the section. But this could not happen and meanwhile Rawalpindi-to-Karachi Sir Syed Express came chugging on the opposite track.

The accident triggered a blame game as Railway Sukkur Divisional Superintendent Tariq Latif said that he had informed the authorities in writing a month ago that the condition of the track at 13 places in the Sukkur division was not good, including the location of the accident site in these 13 places. The railway authorities rebuffed the claim, saying he had been given sufficient funds to get the spot repaired.

According to AFP, the double accident happened around 3.30am when most of the 1,200 passengers aboard the two trains were dozing. “We tumbled upon each other, but that was not so fatal,” Akhtar Rajput, a passenger on the train that derailed, told AFP.

“Then another train hit us from nowhere, and that hit us harder. When I regained my senses, I saw passengers lying around me, some were trying to get out of the coach.”

The Millat Express was heading from Karachi to Sargodha when it derailed, spilling carriages onto the track carrying the Sir Syed Express from Rawalpindi in the opposite direction.

“I was disoriented and trying to figure out what happened to us when the other train hit,” Shahid, another passenger, told AFP.

A clip aired on a local channel showed medics giving an intravenous drip to a conscious passenger whose lower torso was trapped between crushed carriage benches.

Local farmers and villagers were the first at the site, with huge crowds gathering around the carnage of several overturned Pakistan Railways carriages – some clambering on top in an attempt to reach survivors.

The dead were laid out in rows on train seat benches and covered in traditional scarves.

The accident happened on a raised section of track surrounded by lush farmlands.

Interior Minister Sheikh Rashid, former railways minister, said the track where the accident occurred was built in the 1880s and described it as “a shambles”.

A senior police official said he had already warned authorities about the “dangerous condition” of the tracks and carriages.

Prime Minister Imran Khan said he was “shocked” by the accident and promised a full inquiry.

Gul Mohammad, who works with the Edhi Foundation ambulance service which was helping move dead bodies away from the site, said communication problems were hindering the coordination of the rescue efforts.

“I am talking to you as I stand on the rooftop of my ambulance for a better signal,” he told AFP.

Rail accidents are common in Pakistan, which inherited thousands of kilometres (miles) of track and trains from former colonial power Britain.

But the network has seen decades of decline due to corruption, mismanagement and lack of investment.

More than 300 people were killed and 700 injured in 1990 when an overloaded 16-carriage inter-city train crashed into a stationary freight train near the city of Sukkur in Sindh.

More recently, at least 75 people died when a train caught fire while traveling from Karachi to Rawalpindi in October 2019.

Prime Minister Imran Khan, in a tweet, offered his condolences to the deceased and expressed his shock at the incident.

Authorities have announced Rs1.5 million each for the heirs of those killed in the accident while an investigation committee has been formed that would be headed by a 21-grade officer to probe into the crash.

The drivers and crew of both trains are safe.