* Foreign minister says Pakistan to present Kashmir case in front of key ministers of Islamic countries
* ‘No Pakistani will shake hand with Afghan NSA, not even talk to him if he will speak against Pakistan’
* ‘Pakistan would be in FATF’s white list in next session in case of a fair decision’ 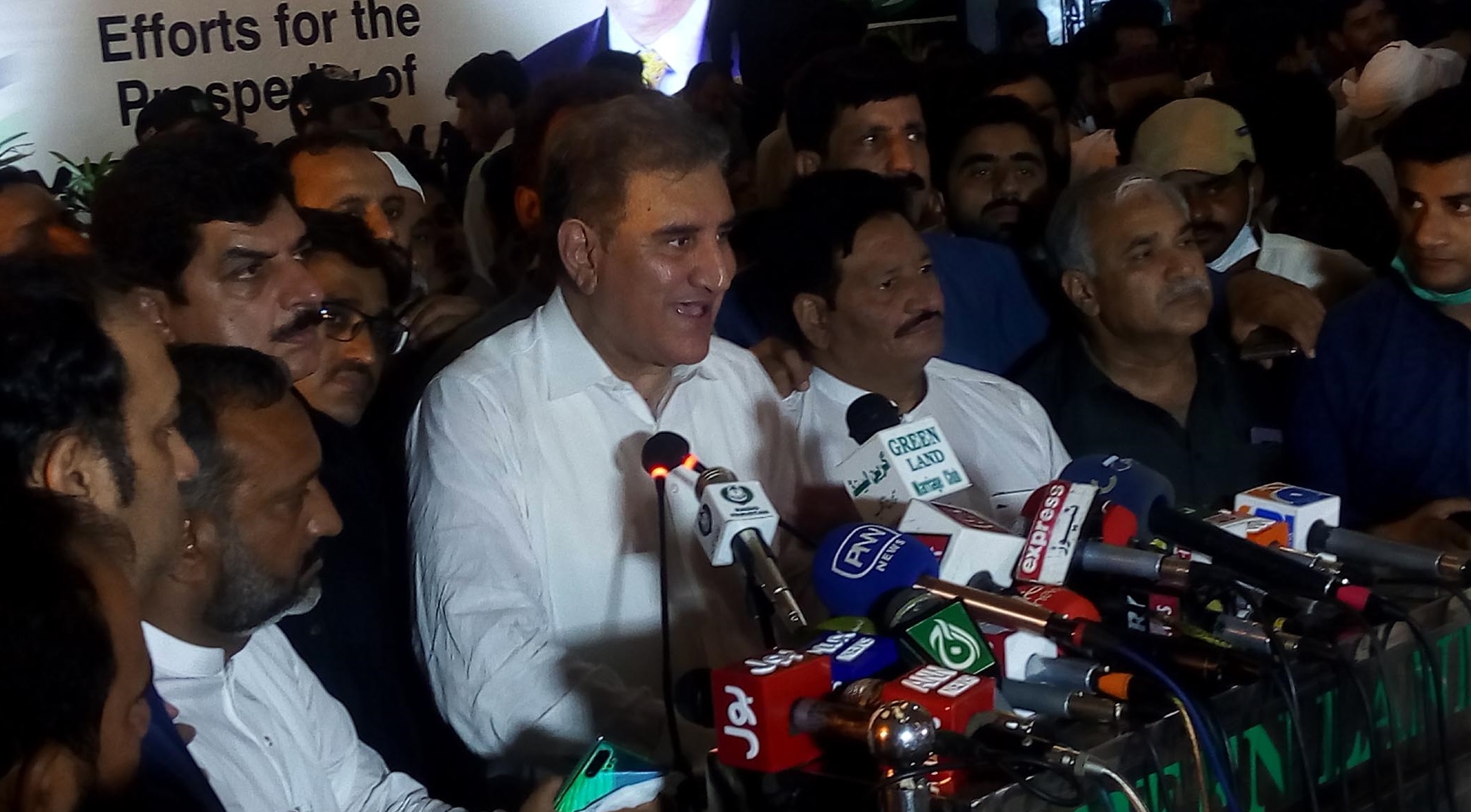 MULTAN: Minister for Foreign Affairs Shah Mahmood Hussain Qureshi has said that Pakistan would invite foreign ministers of all Muslim countries in Islamabad in March next year to present the case of Indian occupied Kashmir for their active role to get the issue resolved.

Addressing a public meeting on his arrival at Multan, he said that Pakistan presented the case of Palestine against Israel’s attack – in which many Palestinians were martyred and injured – at the United Nation through the platform of the Organization of Islamic Cooperation (OIC).

Qureshi said that while the session was in progress, protests had begun in several countries, which put pressure on Israel for ceasefire. In the meantime, he said that the foreign minister of Egypt informed that Israel agreed for a ceasefire.

Beside this, he said that Pakistan’s foreign policy grabbed another achievement by getting a resolution passed in Geneva meeting through which an inquiry commission has been formed to investigate involvement of Israel in war crimes.

The foreign minister said that Israel started attacks on Palestinian people when they were going to offer prayers at Al-Aqsa Mosque on 27th of Ramazan. He said that when Pakistan get this news, Prime Minister Imran Khan and he (Qureshi) were going to Jeddah after performing Islamic pilgrimage in Saudi Arabia.

He said that Pakistan gave quick response and contacted OIC on 28th of Ramazan to play their role to stop Israel’s violence on Palestine. At the UN, he said that he highlighted similarities between Palestine and Kashmir as both the nations were facing attacks, martyrdom, injuries, communication blackout and other human right violations.

After the UN session, “I faced allegation of anti-semitism but the whole nation stood by me through social media platform and defended me by quoting facts and figures,” he said, adding that Pakistan was striving hard to ensure sustainable peace in Afghanistan and the world recognized the stance of Prime Minister Imran Khan for peace through dialogue in Afghanistan.

He said that he had a meeting with foreign minister of Afghanistan and China two days back and he briefed them about Pakistan’s stance for restoring peace in Afghanistan. Reacting to the statement of Afghanistan’s National Security Adviser, Qureshi said that Pakistan had lost lives of 83000 people besides losses worth billions of dollars but still some elements were putting different allegations on Pakistan.

He said that if the National Security Adviser of Afghanistan continued statements against Pakistan, no Pakistani will shake hand with him not even talk to him. He said that international community must ask him to stop creating hurdles in restoration of peace in Afghanistan as the Afghan adviser was playing a role of spoiler.

Qureshi said that Pakistan was moving towards the white list of FATF and in case of a fair decision, Pakistan would be in the white list in the next session. He said that a group of different parties with name of Pakistan Democratic Movement (PDM) having different manifesto, different understandings, different slogans, was formed against the government just for their personal gains and to get relief in corruption cases. He said that the group was going to get to its logical end due to their own differences.

Speaking on the occasion, Punjab Minister for Energy Dr Akhtar Malik said that the way Prime Minister Imran Khan and Shah Mahmood Hussain Qureshi presented the cases of Palestine and Kashmir at United Nations was unprecedented.