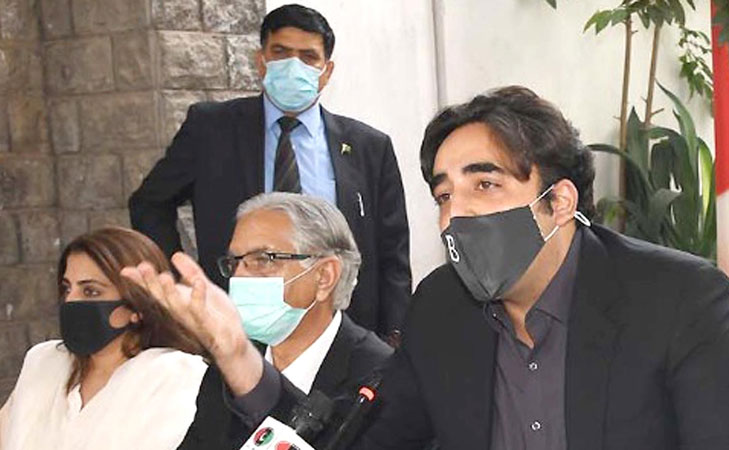 PPP Chairman Bilawal Bhutto-Zardari on Friday berated the PTI-led government for allowing ‘Raiwand’s prime minister’ to leave abroad despite being convicted by the courts.

“If the president (Asif Ali Zardari) is from Nawabshah, he remains on medical bail despite trumped-up charges, moving from one doctor to another – despite his children telling him to go abroad and seek treatment,” the PPP chairman told a press conference in Islamabad. “I want to ask the prime minister (Imran Khan) that what sort of accountability is being implemented in the country?” he said, adding that if the premier’s friends are being alleged of a crime, no action is taken against them.

He went on to say that despite accusations against the prime minister and his sister, no action was taken against them either. “However, if the sister of a former president from Nawabshah is blamed for something, then she is dragged to jail from her hospital bed,” he said, referring to PPP leader Faryal Talpur.

The PPP chairman continued to lash out at the PTI-led government over its standards of accountability. “This system is a mockery of the constitution,” he said. “If the opposition leader is from Lahore (Shahbaz Sharif), he is awarded bail, and if the opposition leader hails from Sukkur (Khursheed Shah), he is denied the right and treated like a ping-pong ball, sent back and forth from NAB courts to the Supreme Court,” he said, claiming that the authorities are repeatedly blackmailing Shah’s children and his wife.

Bilawal said the people would soon hold PTI and PM Imran Khan accountable for their alleged corruption and mismanagement. He further vowed his party would not back down from its stance despite the government’s pressure on it.

During the press conference, Bilawal also lashed out at the PDM, saying it should have offered resignations the same day or the next when the PPP had ‘supposedly’ refused to listen to its demands and set out for its long march. “If they still want to do politics of resignations, then they should have given them by now. I think that when you have seen and the whole nation knows that the numbers are there if you want to attack Prime Minister Imran Khan and (Punjab Chief Minister) Usman Buzdar, then giving resignations in that case and not bringing a no-confidence motion is akin to being an enabler of the government,” he said.

Bilawal said that his party would support Shehbaz Sharif on the budget despite the inappropriate behaviour of some PML-N members. “I unconditionally say to Shehbaz Sharif in front of the media that all PPP members will be in your support with regards to the parliament and this [upcoming] budget despite the tantrums [of some PML-N members],” he said. “PPP members will come and vote on the day of the budget and now it is up to Shehbaz as the leader of the opposition in the National Assembly to do his work and stop the government’s budget,” he said.

Bilawal said despite the ‘inappropriate’ behaviour of the PML-N and other political parties in the opposition, the PPP has prioritised national issues and the budget over differences between the political parties. “So despite their insults, the PPP went to Shehbaz Sharif’s invitation for dinner so we can rid the people of economic difficulties […] unfortunately our host was publicly insulted after that dinner by some officeholders of the PML-N,” he said, adding that flinging statements at guests was not a part of “our tradition, values and culture”.