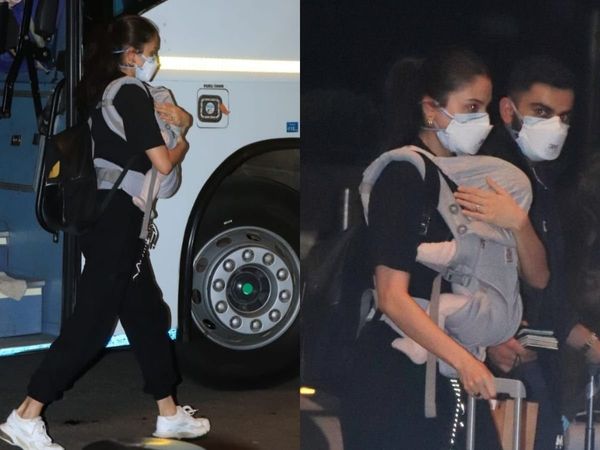 Indian Cricket Team Captain, Virat Kohli, along with his wife, actress Anushka Sharma, and five-month-old daughter, Vamika, were photographed leaving for England for the World Test Championship series. They were spotted on the Mumbai Airport on Wednesday night along with the rest of the team and their families.

Both Anushka and Virat were seen wearing black. Vamika was covered head to toe and was presumably asleep in her mother’s arms.

Vamika’s picture was accidently leaked by an Indian entertainment website. In said photo, Vamika’s face was partially visible towards the media. The site immediately deleted the photo.

The couple has mutually decided to not expose Vamika to the media. Virat Kohli recently shed light on this during his Instagram Q&A session by a declining to post Vamika’s photos saying, “No we have decided as a couple to not expose our child to social media before she has an understanding of what social media is and can make her own choice.”

Virat has opened up about fatherhood by saying, “It’s been life changing. It has been a connect which has been different from anything that both of us have experienced before. Just to see your child smile, it can’t be put in words. I can’t express how it feels from within. It’s just been such a blessed and amazing period.” Anushka has refrained from giving interviews post the birth of her baby girl.

The couple got married in a private ceremony in Italy in December 2017. They welcomed their first child in January 2021.