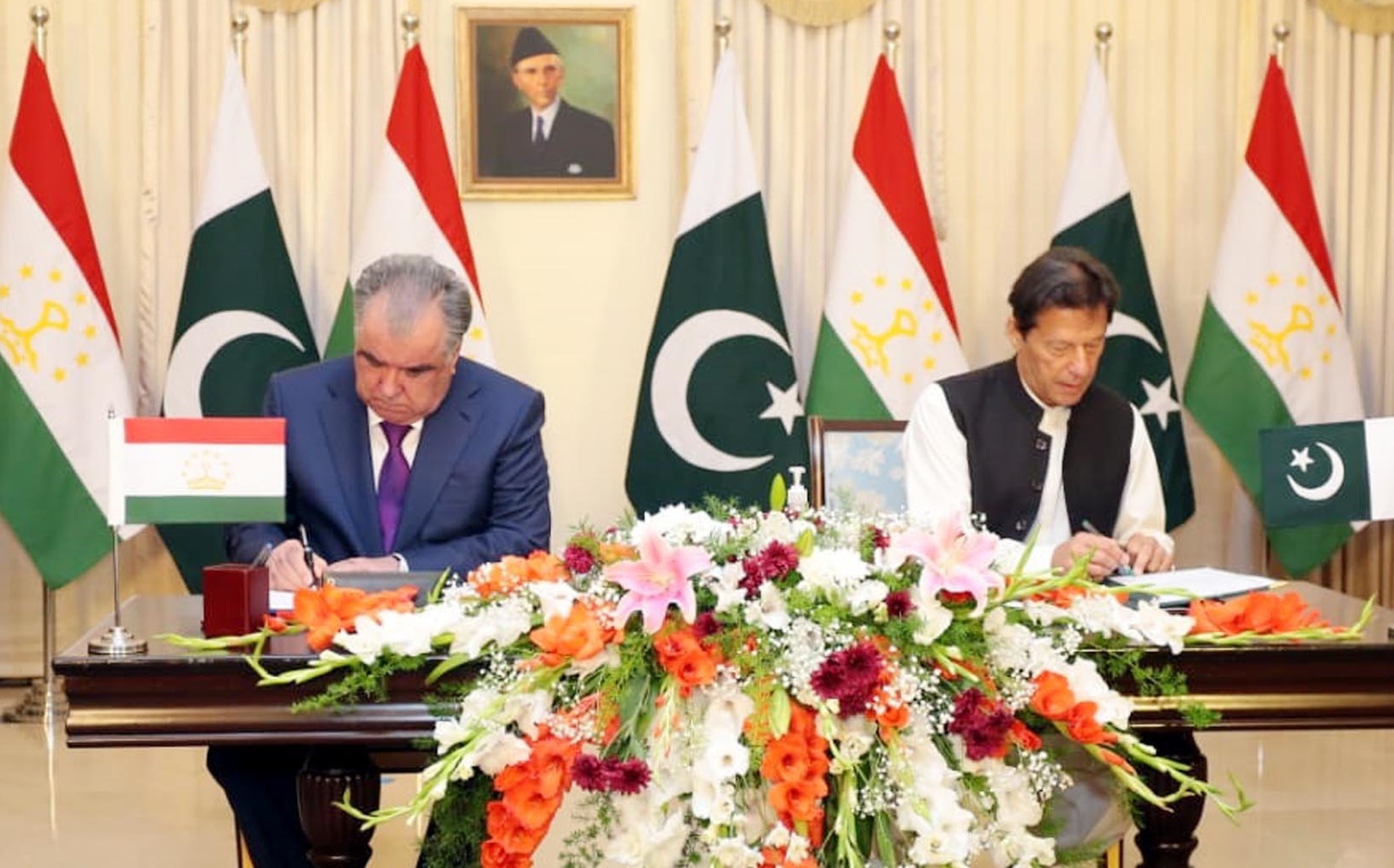 ISLAMABAD: Pakistan and Tajikistan on Wednesday entered into 12 accords for cooperation in diverse fields including trade, anti-corruption, infrastructure, education and culture.

Prime Minister Imran Khan and Tajik President Emomali Rahmon witnessed the signing ceremony as representatives from two sides signed the agreements and the memoranda of understanding. The two leaders also signed a joint declaration encompassing details of discussions taken place during the visit of President Rahmon. The agreements and MoU signed for cooperation in different areas include;

Arrival on a two-day visit, Federal Minister Khusro Bakhtiar received Tajik President Emomali Rahmon as he alighted from his special aircraft at the Nur Khan airbase. Cannons boomed for the 21-gun salute in honour of the visiting dignitary, besides a salute presented by the static guard.

The visiting dignitary was given a guard of honour upon his arrival. pic.twitter.com/lYovOBc0Fa

The visit is taking place at the invitation of Prime Minister Imran Khan. President Emomali Rahmon is being accompanied by a high-level delegation. The visiting dignitary will separately meet President Dr Arif Alvi. Pakistan and Tajikistan enjoy close brotherly relations underpinned by commonalty of faith, shared history and cultural affinities.

These ties are characterized by mutual respect, shared perceptions and a common desire to promote peace, stability and development in the region. Tajikistan is important within the context of Pakistan’s vision for closer ties and enhanced cooperation with Central Asia. The vision emphasizes forging deeper trade, investment, energy, security, and people-to-people links.

The two countries share common views on major regional and international issues and cooperate closely at various multilateral fora. Tajikistan is the current chair of SCO. In March 2021, Minister for Foreign Affairs Shah Mahmood Qureshi visited Dushanbe to attend the ministerial meeting of the Heart of Asia-Istanbul Process (HoA-IP), followed by his bilateral visit to Tajikistan.

On May 25, 2021, the two sides held the fifth round of Pakistan-Tajikistan bilateral political consultations at the level of foreign secretary/first deputy foreign minister and reviewed the whole gamut of bilateral relations. Both Pakistan and Tajikistan are part of the CASA-1000 transmission line project along with Kyrgyz Republic and Afghanistan.

The power project envisages the transportation of surplus electric power from Kyrgyz Republic and Tajikistan to Pakistan (1000mw) and Afghanistan (300mw). President Rahmon has visited Pakistan seven times since 1994. His last bilateral visit was in November 2015. In the multilateral context, President Rahmon visited Pakistan for the 13th ECO Summit held in Islamabad in March 2017.

President Emomali Rahmon was accorded a red carpet welcome when he arrived at the start of his two-day visit. Prime Minister Imran Khan received the Tajik president on his arrival at the PM House. A contingent of armed forces presented a salute to the visiting dignitary. President Rahmon reviewed the guard of honour, presented by a contingent of the three services of the armed forces. Prime Minister Imran Khan and President Rahmon introduced their delegations to each other.

President Emomali Rahmon also planted a sapling at the lawns of the PM House. Later, the two leaders along with their delegations went into for talks.