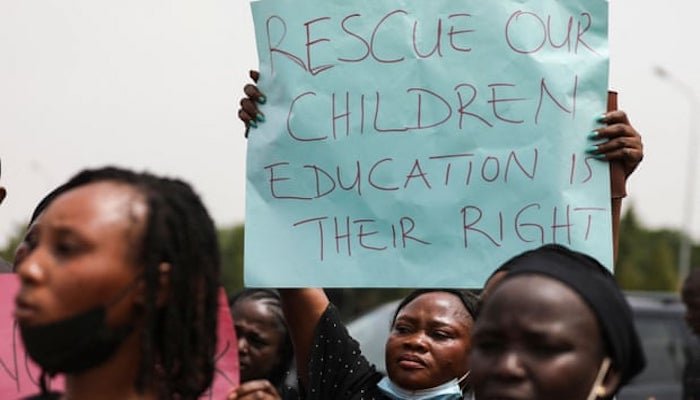 Relatives of scores of schoolchildren kidnapped by gunmen from an Islamic seminary over the weekend have appealed to the government to help free them, after the latest mass abduction to target a Nigerian school.

Some 200 children were at the school in Tegina, central Niger state, when it was raided on Sunday, the local government said, without confirming the exact number abducted. Niger state police said attackers had arrived on motorbikes and started shooting indiscriminately, killing one resident and injuring another, before snatching the children from the Salihu Tanko Islamic school.

“My appeal to the government is that they should try to protect our people first and our children first,” Sa’idu Umar, whose child was among those abducted, told AFP on Tuesday.

“We are hoping that they are going to try harder to bring back our children successfully.”

Mothers and other relatives crouched, weeping and waiting for the missing children outside the school. The Tegina attack marked the latest mass kidnapping in central and northwest Nigeria, where armed criminal gangs often raid villages to loot, steal cattle and kidnap for ransom. Nigerian state authorities have said they are negotiating to bring the children back safely, though said they refused to pay ransom. One school official said more than 100 children were taken though gunmen soon let a few go because they were “too small and couldn’t walk”. “The authorities have done well, but we want them to do more, because as we are here, all the security, both the civil defence, and the army, and the police, they are there with us since yesterday,” said Muhammed Garba, another parent.

President Muhammadu Buhari has ordered the security and intelligence forces to step up efforts to rescue the children. Mass kidnappings in northwest and central Nigeria are complicating challenges facing Buhari’s security forces, who are also battling a more than decade-long jihadist insurgency in the northeast of the country. Since December 2020, before the attack on Sunday, 730 children and students had been kidnapped.= Gangs often target schools in remote areas, where pupils live in dormitories with little security protection, before taking their victims deep into nearby forests to negotiate.