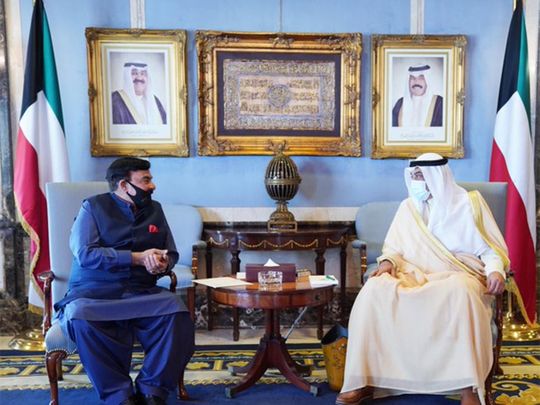 ISLAMABAD: Minister for Interior Sheikh Rashid Ahmed said Kuwait was ready to issue visas to Pakistanis in the construction sector on Tuesday.

Addressing a press conference here, he said he had undertaken a successful visit to Kuwait on the directives of Prime Minister Imran Khan. After a lapse of around 11 years, Kuwait had restored visas for Pakistani businessmen, doctors, the petroleum sector, and families. The Kuwaiti prime minister had also expressed eagerness to issue visas for the construction sector.

Around 425 Pakistani doctors would leave for Kuwait during the current week, he added.

He said some 52 Pakistanis were in Kuwaiti jails, and six of them wanted to return.

The minister said Pakistan would get a 30 percent share of three million Saudi visas also.

Sheikh Rashid said the country’s Gross Domestic Product GDP growth rate was touching 4 percent, and the remittances from overseas Pakistanis had played a vital role in that regard.

Regarding the Cyber Crime Wing, the minister said 9.4 million reports were received during the last year and 36,000 reports during his tenure. Inquires had been completed on 5,355 reports while 399 cases were lodged.

The government was equipping the Cyber Crime Wing with modern gadgets while National Database Registration Authority would also be strengthened, he added.

The minister said authorities were close to tracing one of the suspects involved in torturing journalist Asad Ali Toor last week at his Islamabad apartment.

He said the Federal Investigation Agency (FIA) and police were probing the incident. “The suspects will be identified through fingerprints in a day or two.”

The building’s receptionist, in his statement, told the investigators that he did not stop the culprits because they had visited Mr. Toor in the past, he added.

“I have called the Inspector General of Police Islamabad, NADRA, and FIA officials, who told him they are close to identifying one of the accused,” the minister said.

Responding to a question, the interior minister said NADRA conducted the analysis of fingerprints, and the accused would be arrested soon. “Otherwise, we will give advertisements in newspapers with the photos of suspects because some people are blaming our agencies for the incident to fulfill their specific agenda.”

He said a policy was needed in that regard as such incidents became human rights issues. It was important to expose the culprits as some individuals were unnecessarily targeting the security agencies, he added.

Sheikh Rashid lashed out at the opposition parties, saying the Pakistan Democratic Movement (PDM) had lost its momentum. He had already predicted that the Pakistan Muslim League-Nawaz (PML-N) would divide into factions.

The minister said the vaccine issue with the Saudi government was in the notice of Prime Minister Imran Khan, and it would be resolved soon.

He said the government’s pilot scheme was only for the journalists and media workers of the Federal Capital.