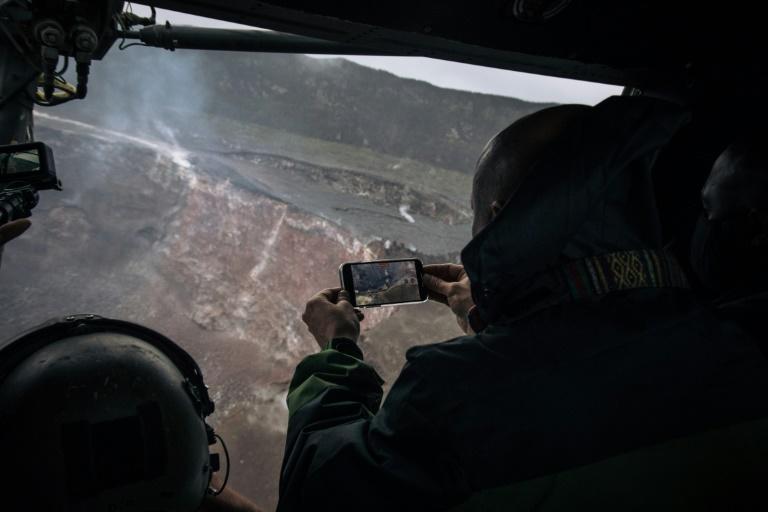 A week after Africa’s most active volcano, Mount Nyiragongo, erupted in eastern Democratic Republic of Congo and poured lava into the city of Goma, experts flew into a second smoking crater nearby to assess the risks.

Piloted by South Africans, a Puma helicopter from the UN’s MONUSCO peacekeeping mission delivered leading volcanologists to the inside of Mount Nyamuragira, where molten lava could be seen spitting out of the ground. Since the May 22 eruption of Nyiragongo, which overlooks Goma on the shore of Lake Kivu, nearly three dozen people have lost their lives. It destroyed some 20,000 homes and led to an exodus of around 400,000 residents as officials urged a “preventative evacuation”.

On Saturday, the government warned that Murara volcano, a crater in the Nyamuragira system, had also erupted, but the communications ministry later said this was “a false alarm”, pointing to smoke from smouldering wood. When the helicopter set down on solidified volcanic crust inside Nyamuragira, a man in a green windcheater leapt out of the hold, grinning broadly and holding a case containing a drone. Dario Tedesco, an Italian volcanologist, has lived in Goma for several years and knows the imposing peaks almost by heart. He looked quite at home in the hostile environment 25 kilometres (15 miles) north of the city.

The lava crust crumbled under his feet as he stepped out alone amid the sulphur fumes and fog around Nyamuragira’s almost 3,500-metre (11,500 foot) peak. Tedesco unfolded a drone helipad resembling a toy, a square of blue plastic one metre across marked with a large H. With the drone’s-eye-view he could observe the lava spurts and better understand what was going on in the bowels of the beast by studying the fiery activity. As he worked, three landslides in the internal walls of the crater in the space of an  hour broke the silence with long, deep rumbles, making the intruders shiver. It was time to return to the real world on the shore of Lake Kivu, but not before a closer look from the air at the summit of Nyiragongo, inaccessible on foot because of the intense activity in the crater. Even its outline was impossible to make out, shrouded in clouds and a huge column of ash rising high into the sky as the sunset shaded from purple through orange and red. On the short return flight, the huge villas of wealthy Congolese, the guesthouses of international NGOs and luxury restaurants were visible studding the shores of Lake Kivu.

Just a tiny distance away is the volcano — almost another planet.