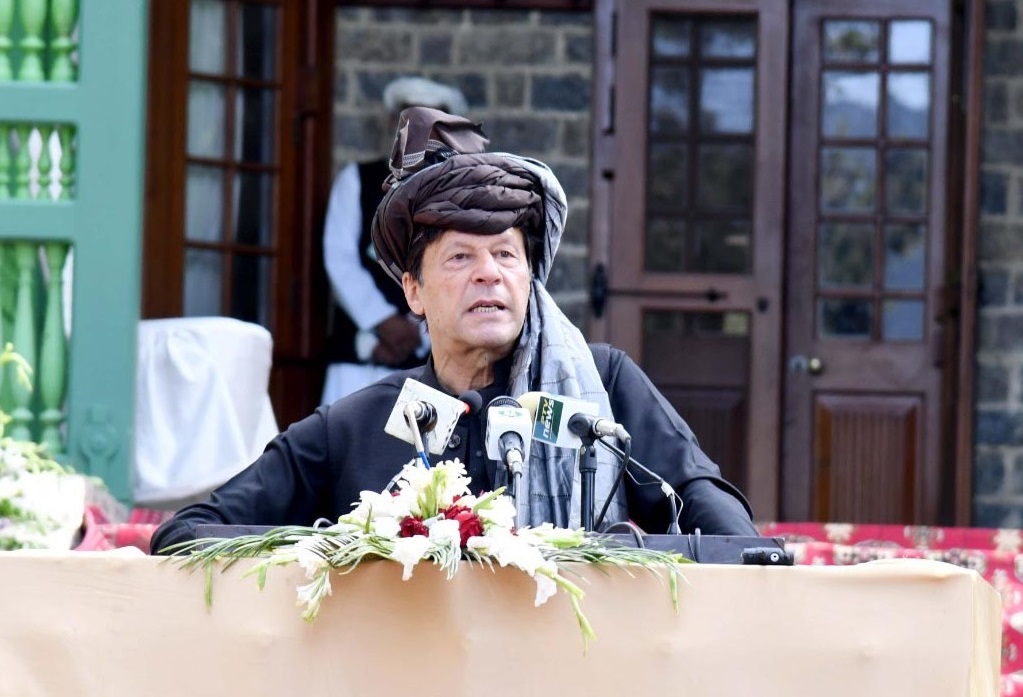 ZIARAT: Prime Minister Imran Khan on Tuesday said that with gross domestic product (GDP) growth, estimated at around 4% during the current fiscal (2020-21), Pakistan had been steered out of economic hardships and was set to achieve further growth in the upcoming year.

“I have good news to share with you that Pakistan is coming out of economic hardships. The GDP growth is estimated at around 4% and has been made public,” he said while speaking to a gathering here at the Quaid Residency. The prime minister regretted that the opposition parties, which had been claiming about the government’s failure for the last two and half years, were now disputing the GDP growth figure.

“Pakistan will go further up in economic terms during our next government,” he said. He said that despite the economic restraints due to the debt burden it inherited and the fact that there was coalition government in the province, the federal government was spending much in Balochistan because it owned the people of the province, which was neglected in the past.

“Had the previous governments spent more in Balochistan, the situation would have been better.” He said that the leaders had two choices either to make money for themselves or spend on the nation. “If I think about palaces in London. How I will think about the nation!” he remarked.

He referred to the contribution of Mahatir Muhammad and Lee Kuan Yew – leaders of Malaysia and Singapore – in the development of their countries and said they did not make money or build palaces in London but served their countries and nations. He said Ziarat could be turned into a tourism hub for enhancing the income of local populace and check poverty.

The prime minister said that Khyber Pakhtunkhwa, which had faced terrorism and even lost the lives of 500 policemen, achieved enhanced development during the 2013-18 government of the Pakistan Tehreek-e-Insaf. He also referred to the UN Development Programme (UNDP) report, which acknowledged reduction in poverty, reduction of gap in the rich and the poor, and enhanced spending in the areas of human development, education, health and tourism.

About the problem of non-availability of Sui-gas in Ziarat, he assured that in order to address issue, the government, after having done feasibility of the project, would provide funds for the establishment of an LPG (Liquefied Petroleum Gas) plant in the area during the next fiscal year. He said as he believed that Pakistan’s progress depended on inclusive development, the government would continue to support Balochistan and other areas.

He mentioned the government’s Ehsaas Programme, which comprised support for skill development, women empowerment in villages, loans for the youth and said all the schemes were meant to support the poor. Under the Naya Pakistan Housing Programme, he said low income people, including the salaried class, labourers, mechanics etc were being provided houses and apartments on ownership basis through easy installments equaling the amounts they pay for a rented house.

He said that he was pleased to visit the Quaid’s Residency, where founder of the nation passed his days. He always desired to visit the residency, which was a historic monument, he said. On the occasion, the prime minister expressed his grief over the martyrdom of Frontier Constabulary (FC) personnel in the terrorist attacks in Quetta and Turbat on Tuesday, and prayed for peace of departed souls as well as for fortitude of the bereaved family members.

Strongly condemn terrorist attacks against our soldiers in Balochistan last night, martyring 4 soldiers & injuring 8. My prayers & condolences go to the martyrs families. We will continue our fight ag these terrorists & will not allow them to sabotage peace & dev in Balochistan.

In his welcome remarks, Chief Minister Jam Kamal said the visit of Prime Minister Imran Khan despite the incident showed the present government’s resolve to fight terrorism and foil designs of anti-Pakistan elements. He praised the prime minister for initiating various development projects in Balochistan, including roads and highways for enhanced connectivity of the province, and spending and allocating billions of rupees for that purpose.

The chief minister pointed out the problem of non-availability of natural gas in Ziarat and proposed for the establishment of an LPG plant in the area, which, besides addressing the issue, would also help preserve the precious thousands years old juniper trees, cut by the local people to fulfill their needs of cooking and heating.