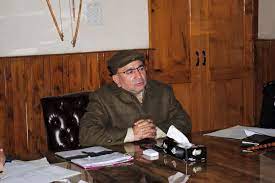 SWAT: A meeting was held at the Commissioner’s Office in Saidu Sharif under the chair of Commissioner Malakand Division, Syed Zaheerul Islam, to review the arrangements for a national anti-polio campaign in the same area.

Commissioner Zaheerul Islam said that they are at a critical juncture in eradicating a dangerous virus like polio.

“We have to include ourselves in the list of nations that have eradicated polio. We do not want Pakistan to be identified with polio. Preparations for the upcoming anti-polio campaigns should be completed,” he said.

Regarding the performance of the districts, he elaborated that the overall performance regarding polio is satisfactory and this continuity should be maintained and special focus should be given on the areas where there are problems.

The commissioner also directed the District Health Department, District Administration and Police to cooperate with the polio teams in this regard. He said the division would soon be polio-free if the continuity of excellent performance continued.

Reviewing the third wave of corona and vaccination in the meeting, Syed Zaheer said that tourism activities in Malakand have resumed, therefore special attention is needed to curtail Coronavirus.