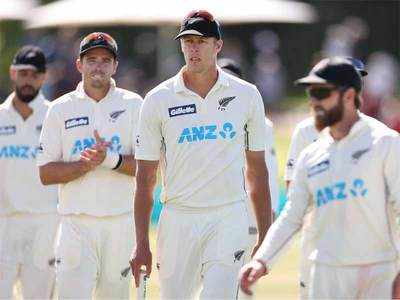 London: New Zealand coach Gary Stead has insisted World Cup final revenge will have no bearing on giant all-rounder Kyle Jamieson and several members of his side when they face England in the first Test at Lords starting on Wednesday.
This week’s match will be the Blackcap’s first fixture at the ‘home of cricket’ since their agonising loss Super Over loss to England in a 2019 World Cup final where the scores were tied at the end of 50 overs per side.
But New Zealand, following this month’s two-match series against England, will have another chance to win a global title when they face India in the inaugural World Test Championship final in Southampton.
And while several members of the New Zealand side, including captain Kane Williamson and fellow top-order batsman Henry Nicholls, will have some painful memories from two years ago.
But Stead is excited by the promise of Jamieson, who didn’t play in that match and has since enjoyed a stellar start to his Test career.
The towering paceman could have a particularly important role as left-arm quick Trent Boult, one of New Zealand’s World Cup stars, is on family leave following the Indian Premier League and is not expected to feature in the two-Test series against England, given he will be arriving in the UK on Friday.
Jamieson’s figures from his first six Tests are as notable as his height, with the 26-year-old having taken an impressive 36 wickets at a miserly 13.27 and averaging more than 56 with the bat.
– ‘Different dimension’ –
“He’s a big tall one for a start. He’s 6ft 8in. He’s hard to miss,” Stead told reporters when asked about Jamieson on Monday.
“He’s certainly brought a different dimension to our bowling attack as well. He bowls at a lively pace, and I just guess with that extra bounce as well, and his ability to swing the ball both ways makes him a real force.
“The thing that I admire most about Kyle is he’s always trying to get better. He works very, very hard on both elements of his game,” he added.
“And certainly those other little things around the peripheral of the team, the way he scouts players, the way he’s looking to talk with players and coaches around developing his game is something that really stands out.”
Reflecting on 2019 final, Stead said: “I guess from my perspective, people want to know is it a chance to come back and revenge what happened in the World Cup? But it’s a completely different team. It’s a different situation.”
Stead, who thanked the England and Wales Cricket Board for staging New Zealand’s first away series since the coronavirus pandemic, added of 2019 final: “I don’t think you ever forget those memories, and they can be a catalyst for change in the way you do things as well. But for us coming here to Lord’s, it’s always a special occasion. It’s the home of cricket.
“I know speaking to some of the guys who hadn’t been here before the happy feelings that they have is something that perhaps they didn’t have to endure through that World Cup final.
“We’ve probably won and lost at most grounds around the world now, so it actually really doesn’t have much bearing on what will happen in this game.”