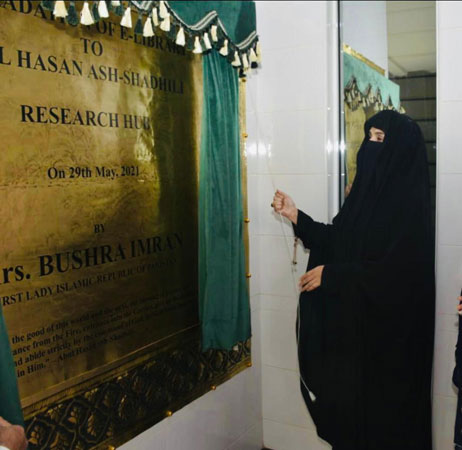 The center has been named after Shaikh Abul Hassan Ash Shadhili, the 13th century Moroccan Islamic scholar and Sufi, who founded the Shadhili Sufi Order. He dedicated all his life to the service of religion, Islam and mysticism. The naming of the research center after the renowned Islamic Sufi is meant to promote religious harmony, tolerance and love for knowledge in the region.

The Shaikh Abul Hasan Ash Shadhili Research Hub will provide students access to the treasure trove of Islamic research in religion and social science, besides science and technology, and help revive the past glory of Islamic scholars and discover new horizons of knowledge and research.

Secretary Sports Punjab Fuad Hashim, in his welcome address, hailed Prime Minister Imran Khan and Bushra Imran for their vision of reviving the past glory of Muslims. The e-library would serve as a research hub in future after its inauguration by the First Lady.

He said research had been the hallmark of Muslim scholars in the past and the Shadhili Research Hub was an effort to introduce the young generations to the works of Ulema, as Islam and Islamic thought spread throughout the world by the Ulema rather than through the sword.

The Secretary Sports said the research hub had been linked with different institutions, including the GCU, LCWU, Jamia Naeemia, and other educational institutions, besides Child Protection Bureau, social welfare institutions and prisons.

It was also linked with JSTOR, Oxford, Cambridge and Harvard universities, he said, adding the people could get its membership free of charge.

LCWU VC Dr Bushra Mirza lauded Bushra Imran for her services to the poor strata of society through the establishment of shelter homes and free food centers, besides taking care of the orphans in the country.

Her vision of promoting Islamic research principles in Sufism would go a long way in reviving the glorious past of the Muslims, she added.

Secretary PHED Nadeem Mehboob said mysticism was the spiritual heritage of the Muslims, which spanned over centuries. Islamic research had been left to the religious seminaries in the past, but the First Lady had now paved the way for it to be started at other educational institutions as well.

He said Rahnumai Markaz portal would provide educational as well as human resource management services, as all the universities had been geo-tagged through the web-portal.

Bushra Imran also launched the Rahnumai Markaz portal of the PHEC, which would provide counseling to the students across the province, besides guidance on admissions to different colleges and universities. The portal would also help the students find scholarships to the foreign and indigenous higher education institutions.

She also witnessed a ceremony to ink a memorandum of understanding among GCU, LCWU, Jamia Naeemia and Auqaf Research Center, under which they would jointly pursue modern research through the Shaikh Abul Hassan Ash Shadhili Research Hub. The Hub would promote research on Sufism, mysticism, and Sufi traditions, besides interfaith faith harmony in collaboration with national and international universities.