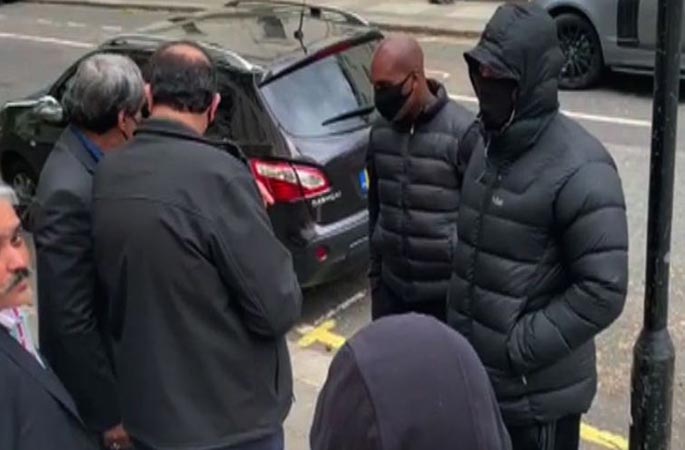 The four men were stopped at the entrance of the office after which they were questioned about the purpose of their visit. They said that they had an appointment with Nawaz Sharif. Three of the men were wearing masks and hoodies to conceal their identity while the fourth man was wearing a suit and was without a mask. When the security guards told the men that there was no record of any such appointment, they tried to forcibly enter the office, the TV channel reported.

According to the PML-N, the alleged assailants tried to break into Hassan Nawaz’s office with the intention of attacking Nawaz Sharif, as he was present at the office at the time of the incident. When the police were called, the four alleged assailants fled the site.

Condemning the incident, PML-N Vice-President Maryam Nawaz said that those who toyed with Nawaz Sharif’s life during his detention have not stopped yet. “Once again, the same elements have made an attempt to attack him,” she said. “May God save everyone from such petty and cowardly enemies,” she added.

The PML-N leader further said that Nawaz Sharif is fighting against the mindset that tried taking pictures of her sick mother – the late Kulsoom Nawaz – when she was hospitalised. “Resorting to gross CRIMINALITY in the face of political frustration and defeat. Peoples voice will not be silenced by low-life, 3rd rate criminals. #NawazSharif is the voice of the people of Pakistan and will not be silenced, Insha’Allah. May Allah protect you #NawazSharif,” she wrote on Twitter.

PML-N President and Leader of Opposition in National Assembly Shahbaz Sharif said that the ‘forcible entry of thugs is reprehensible and worrisome’. “They seemed to be armed and clearly had a sinister design but, thankfully, could not succeed. London police must investigate the incident from all angles,” he further said. “Thank God that Nawaz Sharif safely escaped the deliberate attack,” he said, adding that it is a matter of great concern that armed and masked assailants entered Nawaz’s office with the intention of attacking him. “Those involved should be severely punished according to the law,” he said. “Members of PML-N London have also been directed to conduct a full investigation into the matter,” he added.

The Metropolitan Police said that a criminal case has been registered under CAD No: 477320May2021 and they are looking into the complaint.

Commenting on the incident, Special Assistant to Prime Minister of Pakistan on Political Communication prayed for Nawaz Sharif’s safety but said that he should come back to Pakistan if he doesn’t feel safe. “Surprisingly, he went to London himself and is not ready to return,” Gill wrote in response to Maryam Nawaz’s tweet.

“Now you are putting the responsibility of his security on your political opponents. There is still some time left; if your father does not feel safe in London, he should come back immediately. There will be complete security in the jail,” he added.