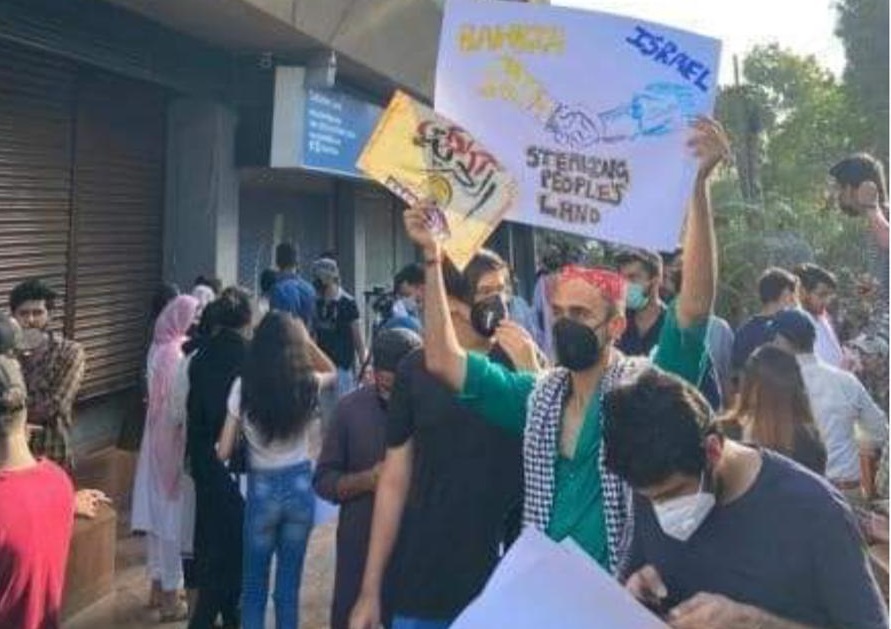 Zulfikar Ali Bhutto Junior, an artist of mixed Pakistani and Lebanese heritage, has staged a protest demonstration in Karachi against Israeli’s actions in Palestine and other occupied territories as well as against Bahria Town ‘for capturing land and forcefully evicting residents’ from their lands by the town management.

Carrying placards inscribed with slogans against Israel as well as the town management, he and his colleagues were chanting slogans against injustices and violent eviction of thousands of native villagers from their lands. Speaking on the occasion, Bhutto Jr condemned atrocities against unarmed civilians.

Bhutto Jr, son of the late Murtaza Bhutto and grandson of former prime minister Zulfikar Ali Bhutto, said that he was protesting against the town management for ‘demolition of villages’ and injuring local people. About Palestine, he said that all humans were standing united in support of Palestinian fellows, which were being subjected to brutalities by the Israeli forces.

In the first week of May, a resident of Karachi’s Gadap Town was shot at and wounded in firing allegedly carried out by private guards and policemen during town’s move to bulldoze agricultural lands to pave the way for housing projects in the outskirts of the city. Sindh Indigenous Rights Alliance activist Abdul Hafeez, a resident of Kathor area, said that the town guards along with police tried to destroy crops in Kamal Khan Jokhio Goth but the locals put up resistance and forced them to abandon the attempt.

In a tweet, the activist said that around 50-60 acres of agricultural land was being demolished to pave the way for new housing projects near Kathor. He said the town officials had told the owner of the land that the land had been awarded to the real estate giant by the Supreme Court and therefore the demolition work would continue. However, they were unable to produce any documents when asked to support their claim by the owner, he said.