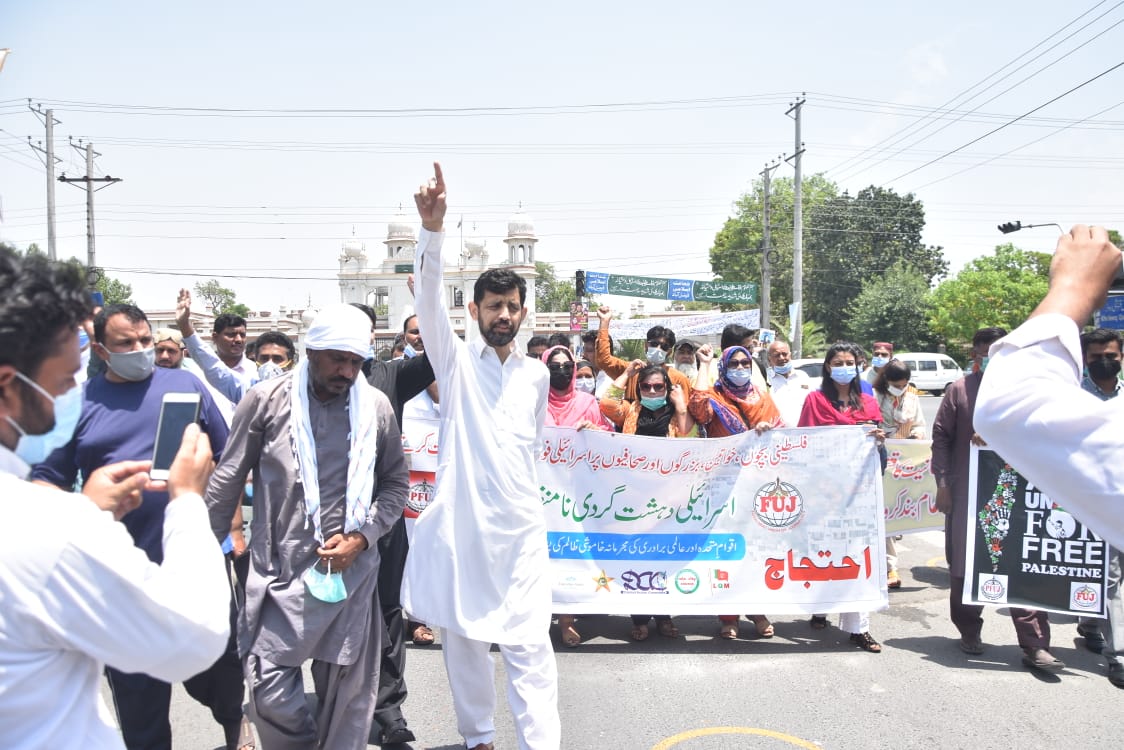 FAISALABAD: A protest rally against the Israeli bombing of innocent Palestinian people and media outlets was staged by the Faisalabad Union of Journalists (FUJ) on the call of the Pakistan Federal Union of Journalists (PFUJ) here on Tuesday. Several civil society organizations and human rights organizations, including the Association of Women for Awareness and Motivation (AWAM), Education Guide, Punjab EducatorsAssociation, PTI Stars, DRAG, District Action Committee for Social Cohesion, Minority Caucus and representatives of mainstream political parties also joined the rally. The rally was taken out from the District Council Chowk and concluded at the same point after passing through various city roads. The rally was led by Nadeem Javed, President of the FUJ,  Asif Ghafar, President of the FUJ, Hamid Yasin, Assistant Secretary of the PFUJ, Muhammad Noorul Amin, member of the FEC, Sonia Patra, coordinator of the AWAM, Noorul Nissan Malik, former PPP parliamentarian, Qadir Sikandar and member of the DAC Faisalabad, Baba Latif of Labour Qoumi Movement.
The participants were carrying banners and placards inscribed with different slogans against Israel and enchanting slogans for urging the international community to intervene.
Addressing the participants, Hamid Yaseen condemned the Israeli aggression and bombing on innocent Palestinian people and media outlets.
Noorul Nissan Malik expressed complete solidarity with the Palestinian people and media and said that we stand shoulder to shoulder with the Palestinian people and media on this time-tested occasion.
Muhammad Noorul Amin hailed the government’s decision for playing an effective role in the prevailing situation of Palestinian and extending every possible help to the Palestinians.
Sonia Patras appreciated the stance of the Organisation of Islamic Cooperation (OIC) on the issue of Palestinian and announced it the right step in the right direction however demanded more concentrated and dedicated efforts for mobilizing the global world to protect the Palestinians.