Speaking for supremacy of law, constitution not treason: Maryam

* Maryam says if speaking for supremacy of constitution is traitorous, PML-N will do it again and again
* Masses are now not afraid of those handing out ‘treason edicts’ 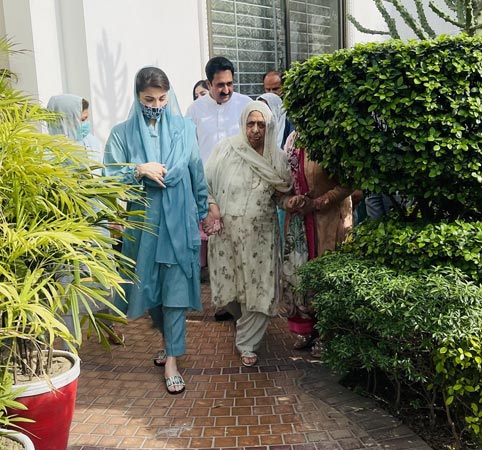 PML-N Vice President Maryam Nawaz on Sunday said that if speaking of the truth, of the supremacy of the constitution, law and institutions is traitorous, then her party will continue to commit the crime.

“If you speak despite knowing that you may be arrested, then it is a true act of courage,” Maryam said while speaking to supporters during visit to party member Javed Latif’s family in Sheikhupura. “Times are changing and people have stopped being fearful of those handing out treason edicts. Let me tell you who a traitor is. It is those who blame national institutions for their own ineligibility. It is also those who impose a selected person on 200 million people,” she said. “Treason also takes place when you make some judges controversial. It also happens when you make attempts to silence the media,” she added.

Maryam said all manner of accusations had been placed on Nawaz but decisions were coming in favour from every ‘corner of Pakistan’ despite him being in London. Pointing to the PML-N’s victory in the Daska by-election, she said people had supported his stance and given respect to the vote.

Maryam claimed there was a time when traitors occupied seats of power and people waited for their abdication to call them a traitor but now ‘the time has changed’. “They are sitting on the seats but the nation is not worried about saying who are the traitors,” she added.

The PML-N vice president then went on to describe what she considered as acts of traitors such as: making a deal for Kashmir and Kashmiris; criticising Pakistan’s ambassadors and foreign missions while the international and Pakistani media was watching; planning to secretly sell Kashmir while sitting in other countries; playing with the lives of the population and more. “Nawaz Sharif was the nation’s prime minister who came through votes and was not a selected prime minister who came after being selected or climbing anyone’s shoulders. When you use Pakistan’s national institutions to remove such a prime minister then that is called ghaddari,” she said.

Maryam said that by labelling Latif a ‘traitor’, the government has, in fact, labelled the people of Sheikhupura traitors. “We have been listening to this word ghaddaar (traitor) for a long time now. Whenever they are afraid of someone, and when they are afraid of the truth, of talk of the law and Constitution, of bravery, the bag opens and out come labels such as traitor […] or thief,” she said.

Maryam said that if being declared a traitor is a crime, then the first person to have been declared one was Mohtarma Fatima Jinnah. She followed by saying even her father, former prime minister Nawaz Sharif was declared a traitor and so had she herself been labelled one. She said that those who have “opened factories to issue fatwas (decrees) of someone being a traitor”, must listen up. “When you are afraid, and have lost, and cannot bear to listen to talk of the supremacy of the constitution, you issue certificates of treachery.”