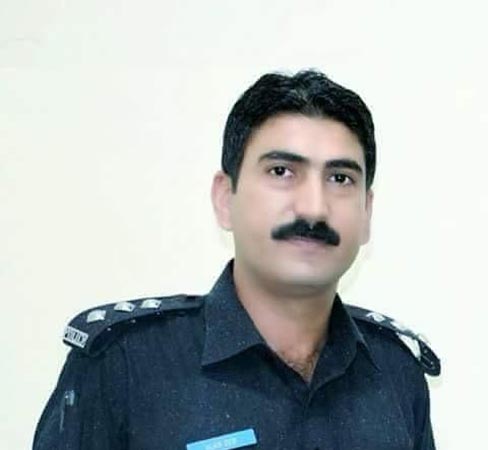 In January 2012, the police received a tip-off the presence suicide bombers in Akora Khattak area of Nowshera district and the cops succeeded in arresting two of the bombers. However, the third one detonated explosives, and blast deprived an officer, Alamzab, of his right hand.

“I was a right hander as I used to do almost all chores with my right hand, this is why it was very difficult for me to cope with life after I lost my right hand to the suicide attack years ago,” Alamzeb Khan, who serves as a deputy superintendent of police in Peshawar, told this correspondent.

However, Alamzeb decided to make a comeback to the police five months after that deadly suicide attack. He is an officer who, despite losing one hand, is serving in the regular police force as a DSP nowadays.

“I was very disheartened because I thought I may not be able to lead. However, later I realized that I had given a sacrifice for the nation and country along with others,” he added.

Alamzeb says he was fond of joining the police force since his childhood as his father was also a police officer. His father was martyred in the line of duty while serving as an SHO at Hoti Police Station in Mardan district.

Having joined the police department as an assistant sub-inspector in the year 2001, Alamzeb has served in various areas of Khyber Pakhtunkhwa province.

Alamzeb participated in a number of sensitive operation. He said he was part of the operation that was conducted by army personnel for the recovery of a son of Sindh High Court chief justice a few years ago. He says several terrorists had been killed in that operation.

The officer also said that he also faced IED attacks and target killing attempts during the days of militancy, ie post-2006 period. However, he says that he is proud of serving the nation and the country.

“I saw my father serve the country and even lose his life in the line of duty. I believe we are duty bound to render sacrifices for the sake of this country and nation,” he said.