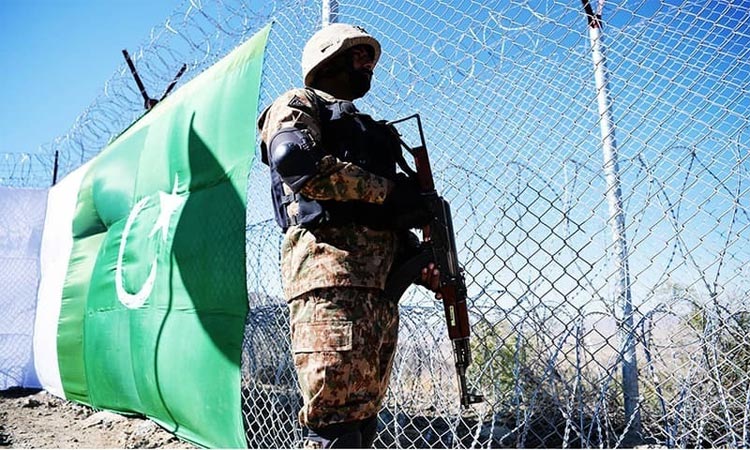 Pakistan on Wednesday called upon neighboring Afghanistan to take action against terrorists after four soldiers were martyred and six others injured in an attack by terrorists near the Pakistan-Afghanistan border in Balochistan province.

“Pakistan strongly condemns such organized attacks and considers these detrimental to ongoing peace and stability along the Pakistan-Afghanistan border,” Zahid Hafeez Chaudhri, spokesman of the Ministry of Foreign Affairs, said. “The Embassy of the Islamic Republic of Afghanistan in Islamabad has been asked to convey Pakistan’s concerns to the relevant Afghan authorities to undertake effective measures against organized groups of terrorists operating from the Afghan soil, follow mutually agreed protocols and SOPs and avoid recurrence of such incidents in future,” he said.

The spokesman said a group of around 20 terrorists carried out an attack on fencing party in Zhob District using small arms and heavy weapons, which resulted in the deaths of four Pakistani soldiers and serious injuries to six others.

The Pakistan Army is fencing nearly 2,600-km border with Afghanistan, and according to military sources, around 90 percent of work on the fencing has been completed. According to the army, the fence is being erected to stop terrorist activities, militants’ infiltration from the border and illegal activities including smuggling from Afghanistan.

Earlier, the Inter-Services Public Relations (ISPR) said in a statement said that terrorists from across Afghanistan ambushed Frontier Corps troops moving for fencing in Manzakai Sector, District Zhob, Balochistan, along Pakistan-Afghanistan Border. The ISPR said four FC soldiers embraced martyrdom while six got injured. The FC troops responded promptly. The injured were evacuated to CMH Quetta, according to a statement.

The military’s media wing said that an officer, identified as Captain Faheem, and two soldiers – Sepoy Shafi and Sepoy Naseem – embraced martyrdom during the exchange of fire with the terrorists in North Waziristan’s Dosalli area.

Security officials insist that Pakistani militants, who have fled to Afghanistan after major operations in the tribal regions, now operate from the Afghan side of the border. Several senior Pakistani Taliban leaders including their chief Maulvi Fazalullah have been killed in Afghanistan, majority of them in US drone strikes.