Our Tainted Souls — a dilemma of the modern-day youth 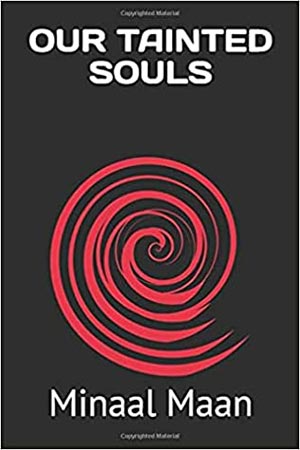 ‘Our Tainted Souls’, published by Auraq Publications, is the debut novel by Minaal Maan, a young, enthusiastic Pakistani author. The novel is a dark and brutal portrayal of the harsh reality of life in Lahore. Through the juxtaposition of two worlds that exist within Lahore, Maan uncovers the hypocrisy, lies and injustice which breed within the society.

The plot revolves around two main characters, Ahmed & Seher. Both belong to different worlds but share the same predicament. Ahmed is the only offspring of an influential and filthy rich politician, Raza Khan, who is corrupt to the core. Raza Khan makes fake promises to the villagers, to lure them to vote for him.

Ahmed lives in this ‘elitest’ sect of society. He has everything he ever desires, except freedom. He hates these high class parties where everyone is fake and drunk. He longs to escape this pretentious world. His mindset clashes with that of his fathers, opening the door for conflict more often than not. Ahmed is a pariah compared to others sharing his life. He thinks differently from his father and is a misfit.

Seher belongs to Zaleemabad, a village close to Lahore, and has her host of dilemmas. Being coerced into marriage to a guy she loathes by her family, leads her to question the societal norms, and she yearns to free herself from the shackles of Zaleemabad’s patriarchal culture. The desire for independence, freedom and escape from their respective cultures allows the reader to find common ground in the two stories. The reader’s mind is left boggled with questions and concern for the two characters, will they dare to break the conventions and restraints that society has imposed on them or will they continue dwelling in unhappiness?

Upon the news of her marriage being broken upon Seher, she begins to questions what is so commonplace in the world. She questions the notion of love. What is love? How can she marry a man whom she doesn’t love? With this entangling thought in mind, her mind shifts to a more grave issue. As the novel unwinds it points to a stark reality. To quote:

‘According to her entire village, you were decent if you did whatever the society demanded of you, and indecent if you dared to step out of the parameters laid down by it.’

Maan’s words as they echo through Seher are heavy and filled with meaning. She points to the conservative and narrow-minded mindset of the villagers. Maan through Seher points to the ills of patriarchy. Men were second only to God in Lahore. Everything was decided by them, rendering a woman inferior to men. If a man was to commit the same sin as a woman the punishment for both would be different and more severe in the case of a woman. Arshad and the men around him took advantage of this disenfranchisement. They were all beasts who believed in the ownership of their wives. They beat them, hurt them and lost their temper if the woman would dare to disobey.

In a heated argument with his father over how his life’s decisions were predetermined to groom him for a political career, Ahmed is told:

‘You have a legacy to uphold.’

Raza Khan’s words paint a perfect picture of the hypocritical nature of their society. The elite society with all its glamour and glitter, pretense, booze and nudity is a stubborn society refusing to leave behind its traditions to avoid any deviation in lineage. It is a corrupt society with debauchery everywhere.

The legacy Raza Khan talks about so proudly is the legacy of a thief who has amassed all his wealth only through empty promises, just like his father did and Ahmed is expected to do. It is indeed ironic as the reader questions: Is this what education has taught? Is the refined and polished way these politicians address the masses the truth? Are they not all monsters thriving off from the hardships of the poor?

Raza Khan and his wife too were both mesmerized by the money and luxuries that power brought them. Their greed surpassed the human in them, and money and power became an addiction, the only substance that nourished their mind and soul.

Another controversial topic dealt with by the author is that of dowry. Dowry was ironically more important to those who didn’t have much to begin with. The bigger the dowry, the greater the respect given to the family of the bride. Dowry was directly related to how honorable the woman was and at some point became the means to preserve a new bride’s honor. Seher, blessed with the power of common sense, questions this barbaric tradition. Was marriage a business transaction? Had she been reduced to the status of a commodity, to be traded, bought and sold? Finally coming to the solution:

‘It was the men who had to be educated.’

To change the setup of society, it is important to educate men on how to behave with women. Gender equality is important for the development of a healthy society and it is inequality and not ‘fahaashi,’ that is breeding divorce, unhappy marriages and discontent.

To lighten the mood, Maan shifts focus onto the environment. She beautifully describes the city of Lahore, as she sees it through Ahmed’s eyes. Ahmed talks of how ‘it was always bursting with life and energy and music.’ Lahore is a diverse city with its underbelly, slums and posh areas. Maan describes the differences between the 3 in a charming and intricate manner, allowing the reader to exercise his imagination to the farthest. Maan through the use of symbolism of the fog/smog and the elm tree brings to light important events. The fog/smog in Lahore entertains the idea of hiding a crime or wrongdoing. An example is when Ahmed sees the rapists retreat into the fog without being tried for their crimes. Similarly, the disappearance of fog symbolizes hope, light and a new beginning. When Seher enters Lahore, the fog mystically thins out, enabling her to see clearly and allowing her to transgress the boundaries and hope for change.

Another parallel Maan draws is of the elm tree which will bend its branches in the face of a storm but will not let it be knocked down. The tree acts as a symbol of the determination and strength that both Ahmed and Seher show in the face of adversity and hardship.

As Seher and Ahmed cross paths, Ahmed promises to help her out. Both Ahmed and Seher grow close to each other because of the similar trials and tribulations they face. They seek refuge in each other. Seher needs shelter and wishes to study further. Ahmed supports her. Finally, Seher realizes her dream and is able to get admission to NCA, partly because of Ahmed’s political influence and mostly because of her extraordinary work. It is here that the reader senses cupid having struck them. With the reader’s mind swirling in a pool of confusion they are forced to contemplate the possibilities. Is it really cupid? What will happen to their relationship? Will they stay friends or will love really set in?

The plot thickens as news of Ahmed’s father being caught for corruption reaches the political circles. His name is placed on the Exit Control List. The verdict turns the future of his family upside down and the responsibility is placed on Ahmed’s shoulders.

Does the reader deliberate onto what will happen next? Will Ahmed be able to shoulder this responsibility? Will he be able to bring his family out of distress? Will he win the upcoming election? Will he be like his father, dishonest and disloyal or will he be different?

The inquisitiveness and curiosity of the reader are expected and justified. And as Maan spills out the beans the reader is left shocked and satisfied at the same time.

The book finally reaches the epilogue and it leaves the reader all the more startled. Maan craftily describes the change in both protagonists. Whilst one has improved for the better, the other has forsaken all that she stood for.

All the material gain that Seher once deemed unimportant and almost hated, now become an integral part of her being. Gone was the Seher that convinced Ahmed to work for the poor, she became the exact opposite of what she preached. She became insensitive, harsh, and a part of the society that she spoke of so lowly at one point. This realization dawns upon her like a bombshell as she reads the headline in the newspaper:

Ahmed Raza Khan, Voice of the Youth to speak at Women’s Enterprourial Conference. Ahmed had not betrayed her trust. He had stood steadfast to his promise. It was she who had changed. It was she who gave up all what she stood for.

The picture that accompanied the headline sent a chill down her spine.

‘What she saw in his eyes was pain that was still raw and true, even after 5 years.’

The epilogue leaves it to the reader to speculate, if Seher will realize her mistake and mend the broken bond? Will she do philanthropy and be able to empathize with the poor or will she turn into a brutal monster like those at the top of the hierarchy?

The novel is beautifully crafted and different from others in how it shows the sinful city of Lahore from both angles-the modern and rural Lahore.

Maan has a gift for description. The characterization and environment are described in a comprehensive and detailed manner, leaving the reader hypnotized and in awe.

Maan writes in the third person and that keeps the suspense intact. She voices her concern through her characters giving it a feeling of being intimate and distant at the same time. The title “Our Tainted Souls’ is apt as it describes the tarnished image of the people of Lahore. Raza Khan, his wife, Arshad, Hamid, Seher and in some way Ahmed all deceive, cheat and lie. They are all partners in crime. In short ‘Our Tainted Souls’ refers to the decrepit society on the whole.

On the whole, a great read! It must be on your bookshelf.