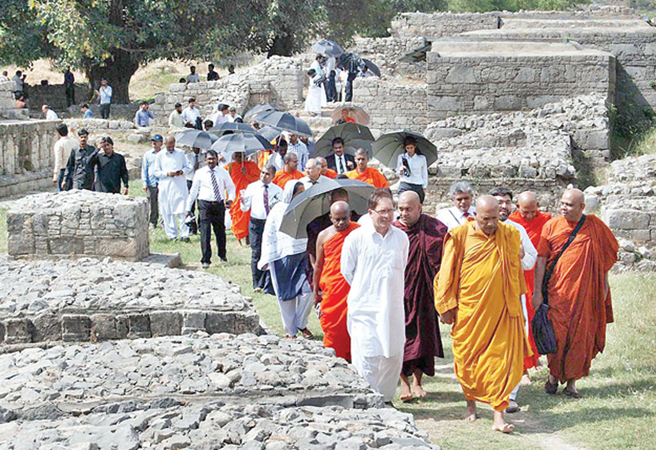 The delegation of Sri Lankan Buddhist Monks visited the rock carved Buddha at Jehanabad in the Swat Valley on Saturday where they also offered their rituals.

The Buddha figure is about 7 meters in height and is certainly the most impressive piece of sculpture to be seen in the Gandhara region. This excellent figure of the Buddha is seated on a high throne in the attitude of mediation. The image of the Buddha carved on the rock at Jehanabad on 7th AD. This huge image of the Buddha can also be visible from the road, on the right side when one is on the way to Malam Jabba.

The delegation of Sri Lankan Buddhist Monks paid a visit to Butkara Stupa in the area of Swat on Saturday afternoon. Butkara stupa was enlarged on five occasions during the following centuries, every time by building over and encapsulating the previous structure. Butkara stupa may have been built by the Mauryan emperor Ashoka.

Talking to the media at Saidu Sharif Stupa on Saturday, senior Monk Dr Walpole Piyananda Thero expressed his great pleasure over visiting Buddhist sacred places in Pakistan. He said Pakistan and Sri Lanka are not strangers as the both the countries have a lot of similarities. He said both countries enjoy the greatest friendship relations.

Dr Walpole Piyananda Thero said Prime Minister Imran Khan is a very popular figure in Sri Lanka. He thanked the government of Pakistan for facilitating the visit. He also appreciated the steps taken for the preservation and protection of the Buddhist sites in Pakistan.

Earlier, Second Secretary of Pakistan High Commission in Colombo Aaishah Abu Bakr Fahad said that the vision of Prime Minister Imran Khan is promotion of religious tourism and protection of the religious places of minorities.

She said the visit of the delegation of Sri Lankan Buddhist Monks is a successful visit and they are very happy to witness their Buddhist sacred places in Pakistan. She said that they are also very happy with the hospitality of the government and the people of Pakistan.

Earlier in the week, the delegation visited Ashoka’s Rock Edict at Shahbazgarhi as well as Buddhist ruins of Jamal Garhi in Mardan district on Friday. The delegation also visited an archaeological site Sirkap in Taxila on Thursday. The ancient remains of Sirkap for their outstanding historical and architectural importance have been declared to protect antiquity.