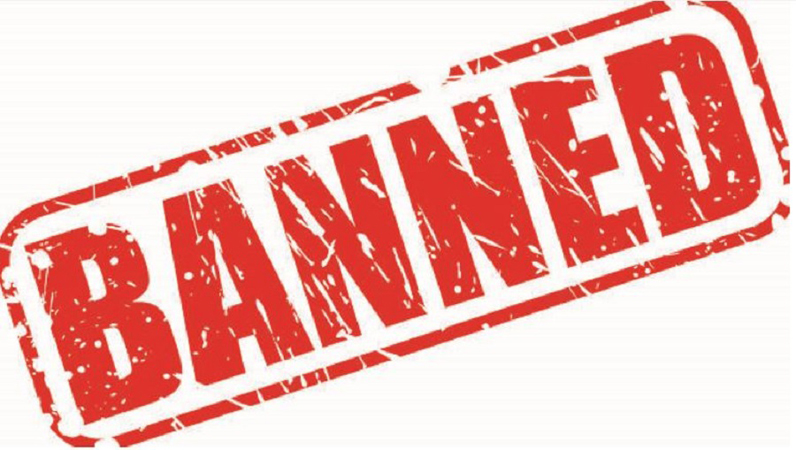 The federal government on Thursday imposed a ban on the Tehreek-e-Labbaik Pakistan (TLP) under the Anti-Terrorism Act. A notification in this regard was issued by the Ministry of Interior.

“The federal government has reasonable grounds to believe that Tehreek-e-Labbaik Pakistan is engaged in terrorism, acted in a manner prejudicial to the peace and security of the country, involved in creating anarchy in the country by intimidating the public, caused grievous bodily harm, hurt and death to the personnel of Law Enforcement Agencies and innocent by-standers, attacked civilians and officials, created wide-scale hurdles, threatened, abused and promoted hatred, vandalised and ransacked public and government properties including vehicles, and caused arson, blocked essential health supplies to hospitals, and has used, threatened, coerced, intimidated, and overawed the government, the public and created sense of fear and insecurity in the society and the public at large,” the notification read.

“Therefore, in exercise of the powers conferred by Section 11B (1) of the Anti-Terrorism Act, 1997, the federal government is pleased to list Tehreek Labbaik Pakistan in the First Schedule to the said Act as a proscribed organisation for the purposes of the said Act,” it added. The notification came as Prime Minister Imran Khan and the federal cabinet approved a summary on Thursday from the interior ministry seeking a ban on the TLP under the anti-terrorism law.

Earlier in the day, Minister for Interior Sheikh Rasheed said the government would not allow anyone to spread anarchy in the country and those who were out with such an agenda would have to face consequences. The government would not show any flexibility as none involved in the violent acts would be let get away scot free, he said while addressing a press conference flanked with Minister for Religious Affairs Noorul Haq Qadri.

The minister said after issuance of the notification to ban the Tehreek-i-Labbaik Pakistan (TLP), a reference would be filed in the Supreme Court for its dissolution.

As ECP denotifies the TLP, all the party’s parliamentarians will stand disqualified.

He said two police constables embraced martyrdom and 580 other personnel received injuries in the violent clashes with the TLP workers. Moreover, 20 vehicles were either burnt or severely damaged by the mob, he added. He said Prime Minister Imran Khan has especially lauded the personnel of law enforcement agencies for boldly standing up to the violent mobs. No leniency would be shown and all those involved in creating the law and order situation would be dealt with iron hand, he vowed.

The minister said the religious party had `dangerous’ plans and designs as it was adamant on a sit-in at the Faizabad Interchange for the fourth time, and the decisions such as banning the TLP had become necessary. He said it was unfortunate that the protestors resorted to the violence, as the government tried to resolve the issue through talks as it had not backed away from its promise to present a resolution in the Parliament. “We got to know during the negotiations that the TLP was planning a march on April 20,” he said, adding the reaction from the party over the arrest of its leader could not be justified. “Their reaction was neither in harmony with what our religion says nor what our constitution says,” he added.

Speaking on the occasion, Noorul Haq Qadri said he had been engaging the TLP for the past two years as it was the government’s effort to bring it into the national mainstream. He said the government had never backtracked from its commitment to present a resolution in the National Assembly. It wanted to draft the resolution with consensus. For the purpose, it had even offered to form a parliamentary committee to work on the draft in consultation with the TLP. The latter regretfully did not agree to it, he added.

As an elected government, Qadri said, every effort was made to convince the TLP leaders that they should adopt some realistic approach. Talking about the arrest of Saad Rizvi, the minister said political leaders, religious leaders and business personalities were arrested, but the reaction shown by the TLP could not be termed rational. The protection of Namoos-i-Risalat (SAW) was the responsibility of the Government Pakistan and it would do the same at every world forum, he added.

Responding to a question, the Interior Minister said, “All French citizens are safe here and there is no threat to them.”

Later in the evening, Saad Rizvi asked his followers to ‘immediately end all protests and road blockages’. A post on Twitter by Special Assistant to Prime Minister Imran Khan on Political Communication Shahbaz Gill, which accompanied the caption “Hafiz Muhammad Saad Rizvi’s latest statement”, showed the photo of a hand-written note, dated April 15 (Thursday). “I, Hafiz Saad Rizvi, son of (late) Khadim Hussain Rizvi, with complete clarity of mind, and without any force, appeal to all the central leadership and workers of the Tehreek-e-Labbaik that in the interest of the nation and the public good, please do not take any illegal steps. All protest rallies and road blockages must immediately be brought to an end. All workers must disperse peacefully and head on to their respective homes and fully cooperate with law enforcement agencies,” reads the statement.