The Broken Cup — a narrative of fire and water!

* Like his first novel In Quest, The Broken Cup too is a novel about love, deceit, trust, betrayal, grief, happiness and a whole flood of emotions and feelings that cannot be hidden! 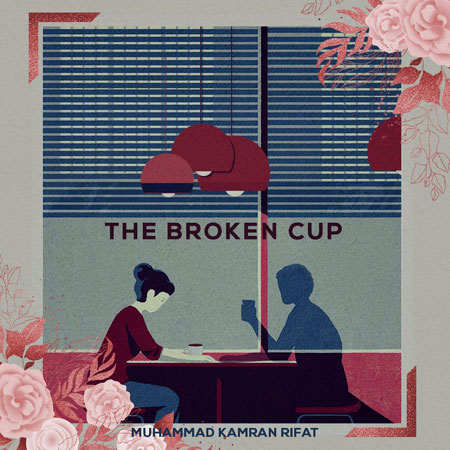 Kamran Rifat, the author of In Quest, has now come up with The Broken Cup, his second creation.

It has been published by Auraq Publications, Pakistan.

Like his first novel In Quest, The Broken Cup too is a novel about love, deceit, trust, betrayal, grief, happiness and a whole flood of emotions and feelings that cannot be hidden!

‘You cannot hide love and smell.’

Although the reference here is for the love of biryani, the underline meaning can be directed at relationships and its complications.

Just like you can smell danger, pleasure, sorrow, and can love an entity unconditionally without judgment. Likewise, the similarity in love and smell being that both are explicit and cannot be coveted.

The plot unfolds itself through the characters in the novel.

Mirsab and Nariman are the protagonists in The Broken Cup with Hasam and Mariyah playing supporting roles. Hasam is Mirsab’s best friend and Maryiah is Hasam’s wife and Nariman’s friend. With the characters in place, The Broken Cup is a suitable title for the novel because of how it handles the intricate web of relationships. The book shows the cup once brimming with life and love, now broken – leaving behind only rage, remorse and devastation.

‘You cannot hide love and smell’

Rifat deserves to be given credit on how he captures the beauty of Lahore in all four seasons. But the description of Lahore in the rain is unparalleled. And I quote:

‘The breathtaking majestic vibe of Lahore in the rain has no match in the entire world.’

‘inhaling the sweet smell of clay after the rain had touched its soul. Nothing could beat the aroma.’

And as Mirsab enters the coffee shop called NoteBook, another surprise awaits him. A surprise that shakes him to the core. That reminds him of all the slow moving movie scenes with hair ruffling in the wind, time momentarily stopping. What could achieve such a reaction?

Whilst the downpour brought fun and dance for the Lahoris, it wreaked havoc in Karachi.

The difference here between the 2 cities of Karachi and Lahore has been highlighted with a prominence. Whilst Karachi is a cosmopolitan city, bustling with economic activity, Lahore is developed but also an environment friendly city – green and fresh!

‘Lahore one city in the world, neither sleeps nor cools down easily.’

The thematic concern in terms of describing Lahore is similar to Mohsin Hamid’s Moth Smoke and Nadia Akbar’s Goodbye Freddie Mercury, yet the beauty, and spontaneity with which Rifat crafts the novel is commendable.

Returning to where we left- What did Mirsab see in the café?

Nariman-a girl. It was love at first sight, a rarity in today’s fast paced world!

Nariman snatched his peace of mind. Mirsab lost his focus for the girl occupied his every minute.

Mirsab upon informing Hassam of his encounter is met with sarcasm.

‘He thought his quest to find her without knowing the name and address was straight out of a Bollywood movie.’

What kind of ‘filmy’ love is this? Is it a story of Romeo & Juliet, Heer Ranjha or Laila Majnu? Is such love viable? Does such a love still exist?

How will he ever find Nariman? Fate and probability are perhaps the only option he has. After all miracles do happen!

The following paragraph on love captures the essence of it in a nutshell.

‘Love is like a flowing stream of water gliding in one single direction. If you tie up a knot to imprison and stagnate love, it’ll stay in that self-created confinement until either the spell breaks or spillway is forced open, or the natural process of things causes it to flow again.’

‘Yet no one had ever been able to tie up such a knot how can one intentionally stop the flow of the stream? It was quite unnatural. Those who thought they had blocked love in their lives are living in a fool’s paradise.’

This paragraph lies at the heart of the novel. It seems to be the epitome of the definition of love! Love cannot be forced neither can it be trapped. It just happens. It is spontaneous. It is free.

Does Mirsab stay true to the nature of love? Does he remain loyal and honest to Nariman, loving her wholly with every passing second? Will he have the picture perfect romance or will there be complications? The suspense can only be broken upon reading the novel! So grab a copy and satisfy your urge to read!

Rifat also has as the novel’s thematic concern, the comparison between nature & wilderness versus urbanisation.

He offers a beautiful contrast of natural environment with urbanization. The aesthetic appeal of Hassam’s wedding décor was worth raving about. It was done with a finesse and exquisiteness that was unmatchable. The month of the wedding was November.

Summer had ended and Autumn had arrived, setting in beautifully.

Rifat captures the serenity and allure of Autumn in a hypnotic manner.

With the trees seeming ablaze ‘with leaves of brilliant yellow, bright orange and subtle red tainted slightly by the brown crispness of Autumn,’ autumn had its own fragrance.

It started in October and now with November setting in it was in full bloom. The temperature in Lahore had plummeted with nights becoming longer.

The author describes the natural environment in an extensive manner, alluding to all five senses. Just as the urbanized setting is conveyed with an artistry that is beyond perfect, so is nature.

Rifat also points to the global crisis of climate change. Whereas winter used to come earlier in November in older times and was much colder and chilly. Now because of pollution and carbon emissions the weather pattern has changed becoming ‘confused’ and erratic.

Like the weather Mirsab too is confused. The turmoil of emotions and questions swirling in his mind ruined his peace. Will he really be able to find his true love? He could not seem to think with his mind. He only wanted to listen to his heart, to his intuition.

The author loosens the tension in the mind of the reader as he shifts focus from Mirsab to describing the culture and traditions of the Lahori weddings in a manner that is comprehensive, engaging and heart-warming.

Hasam and Mariyah get married and Rifat takes the liberty to use the occasion to describe the Lahori wedding culture in a detailed and far reaching manner.

The occasion of mehndi is a fun-filled, colourful event marked by the festivities of dance, dholak and small meaningful gestures such as applying henna to the bride’s hands and stuffing mithai in the newly wed couples mouth. The bride would wear flower jewellery to symbolize her purity & innocence.

The story then shifts to Mirsab & Nariman. The following dialogue happens between them.

Mirsab: ‘It is criminally unfair to judge a book by its cover.’

Nariman: ‘And I need time to read. Is this too much to ask?’

Mirsab: ‘Love does not happen with time. It is or it isn’t.’

The argument shows the strain in relationship. What has gone wrong between the two lovebirds? What could be the reason behind the fights and quarrels?

The reason I shall not reveal for that will ruin the suspense.

The novel moves forward with Mirsab and Nariman tying the knot. Questions of trust and loyalty are evoked.

Why was Mirsab trying to justify his act? Has he done something unforgivable?

Nariman too is adamant and does not want to hear any excuse, any justification. The reader wonders where the two are going? Will the novel end on a reconciliation or will everything be ruined? Five years down the lane, will their relationship be able to withstand the test of time, the trials and tribulations or will all that they have collapse?

Nariman goes back the memory lane and conjectures on what their relationship had offered? Mirsab was the one who taught her how to love completely. How could Mirsab go against all he believed in? How could he even think of hurting her? She could not find an answer.

Mirsab tries to explain himself. He argues on the basis of how everyone has a past.

But Nariman is not convinced and says:

‘But not everyone brings past into present to ruin the future.’

The reader is forced to speculate on what Mirsab did in the past to bring so much agony and pain in their present.

Rifat also points to the ills of patriarchy.

‘I know what I have done is awful. But there comes a moment in life when you feel weak.’

Nariman questions his masculinity and says:

‘What would you do if at any point in time, I felt the same?’

Isn’t that true of most men? Are they all not male chauvinists? Do they not consider women inferior to them? Do they not marginalize both nature and women, destroying their very essence and being? If a woman is to commit the same sin as a man will there not be different punishments for both? A woman is by no means an equal to a man in our society. The man is the head and nothing goes against his will. And it is this inequality that is breeding divorces, unhappy marriages and discontent.

The author paints a beautiful parable of the relationship of a married couple to that of a bicycle.

‘The relationship between husband and wife is a like a bicycle. To turn right steering should move to the right with the back tyre in the same direction. The bicycle will lose its balance if this didn’t happen and fall. What should I do when I find out tyre is punctured? Keep cycling the wobbling bicycle?’

‘You can only change the tyre if you cannot repair it.’

This comparison points very accurately to what happens to a relationship when it goes off balance. The damage is beyond repair.

The novel ends with a flashback to the past 5 years. It was when he had made vows of love and loyalty to his wife, Nariman.

Was he able to keep the promises he had made?

The novel ends with untying the knots in the story and quenching the readers thirst for answers. The quote at the very end is the takeaway from the novel.

‘You cannot turn back the hand of time, no matter how hard you try.’ It points to a universal truth-time is irreversible.

Rifat’s novel has an endearing quality to it. The detailed descriptions of the environment combined with the dangerous complexity of emotions creates an aura of magic and awe that captivates the reader. As the novel opens and moves forward the reader can sense a predictable pattern of events but what happens next is uncalled for. The reader is not prepared to witness the turn of events which is startling and definitely unexpected!

A great novel indeed. An entertaining and simple read. Perfect to lighten your mood on a heavy day!