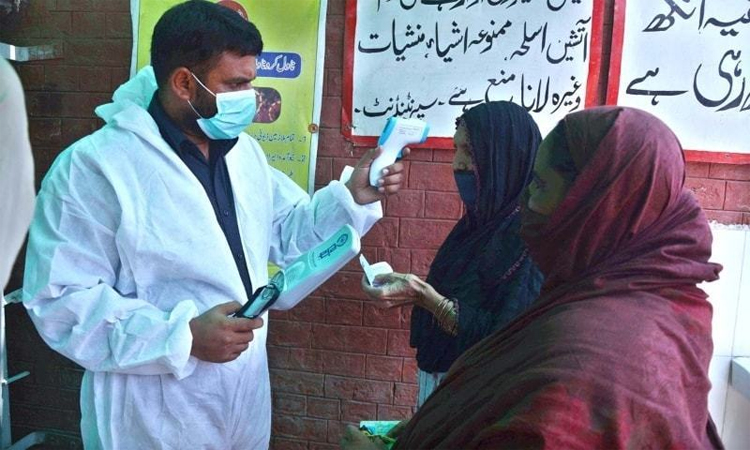 The national tally of total active Covid-19 cases was recorded at 53,127 as 4,974 more people tested positive for the deadly virus on Thursday, the highest number of fresh infections in a single day since June last year.

Ninety-eight corona patients died on Thursday, 88 of whom were under treatment in hospitals and 10 in their respective quarantines or homes, according to the latest update issued by the National command and Operation Centre (NCOC). Most of the deaths occurred in Punjab, followed by Khyber Pakhtunkhwa. Out of the total 98 deaths, 29 of the deceased died on ventilators during their treatment.

Around 605,274 people have recovered from the disease so far across Pakistan making it a significant count with over 90 percent recovery ratio of the affected patients.

Reports said at Punjab CM House, two employees had contracted coronavirus and lost their lives a few days ago. They said that the deceased included a protocol officer and a waiter. At least 16 officials of the CM House have also tested positive for coronavirus.

A spokesperson of Punjab CM House said that Buzdar will only hold important meetings and visits at his office. He added that there was a ban imposed on normal visits due to coronavirus.

Separately, Special Assistant to Chief Minister Kamran Bangash confirmed that six employees of the KP CM House have tested positive for coronavirus. He said that the CM’s meetings with elected officials have been reduced, adding that government meetings will be held via video link.

In Lahore, the medical superintendent (MS) of the Mozang Teaching Hospital has been suspended after 350 coronavirus vaccine doses stored there were spoiled, a senior health official said on Thursday. According to a notification of the Punjab Specialised Healthcare and Medical Education Department dated March 29, the MS, Dr Munir Ahmad Ghouri, was “placed under suspension, under Section 6 of PEEDA Act, 2006, on accounts of inefficiency and misconduct, with immediate effect”.

Meanwhile, Punjab Health Minister Dr Yasmin Rashid said the MS was suspended for “extreme inefficiency” and an inquiry committee was formed. “It will be clear in the [committee’s] report where the vaccine doses ‘disappeared’. Strict action will be taken after the identification of those responsible,” she said.