* Governments have been forced to tighten restrictions to stem surging pandemic 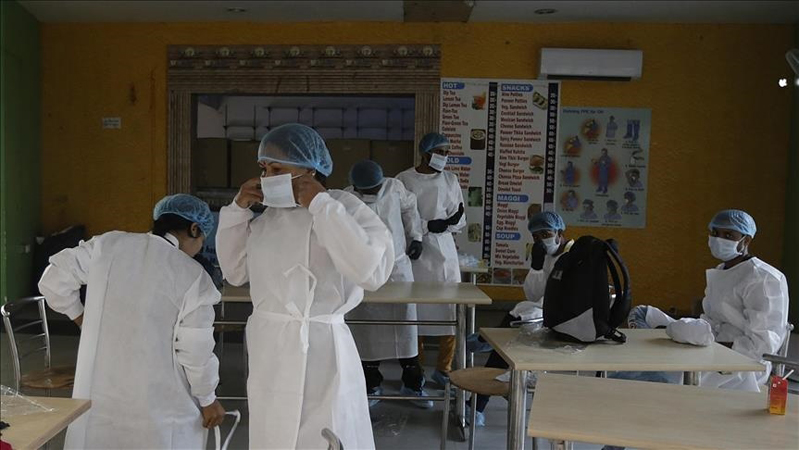 Amid ramped up vaccinations across the world to fight the coronavirus pandemic, a third wave of the virus has already taken a toll on the Asia-Pacific region.

Countries including India, Pakistan, Bangladesh, Indonesia and the Philippines, which had reported a significant drop in infections over the past few months, are currently grappling with the fresh wave of COVID-19.

Hundreds of thousands of new infections have been reported in the five populous nations over the last week, with India alone recording well over 500,000 new cases during the period. The sharp rise in infections has forced the governments to reimpose restrictions, including mini lockdowns, night curfews and bans on large gatherings as overwhelmed hospitals are put on high alert.

India — the world’s second most populous country after China — reported over 68,000 new infections Monday, its highest daily figure since October, taking its overall tally to over 12 million. The death toll rose to over 162,000.

The western state of Maharashtra, mainly its capital Mumbai, has been the hardest hit by the third wave, forcing the state government to impose a night curfew from Sunday in a bid to contain the pandemic.

India’s Health Ministry announced on March 24 that it had detected a new “double mutant variant” of the coronavirus, adding to the concerns of health authorities, who have appealed to citizens to “strictly” follow safety precautions in order to reduce the burden on already overwhelmed hospitals.

In neighboring Pakistan, whose total caseload has reached around 660,000 with over 14,000 deaths, the government has hinted at further tightening restrictions as the South Asian state has been recording over 4,000 daily cases over the past five days.

Being one of Asia’s hardest-hit nations by the pandemic, Indonesia has so far reported more than 1.5 million cases and over 40,500 deaths.

The situation in Bangladesh and the Philippines is no different, where authorities have re-imposed restrictions including bans on large gatherings and the closure of schools to curb the growing number of infections. “The situation this time is more dangerous as the ongoing incline in the number of infections has taken less time compared to during the first and second waves,” Dr. Rana Jawad Asghar, an adjunct professor of Epidemiology at the University of Nebraska, told Anadolu Agency.

Citing the current trajectories of India, Pakistan and Bangladesh, Asghar warned that if the ongoing trend continues, the three countries are likely to “soon” reach the peak where they were during the first wave.

Dr. Md. Shahed Rafi Pavel, a Dhaka-based medical expert, said the third wave of the global pandemic is more dangerous in terms of infections and other effects.

Underlining the current rising trend of the virus across the globe, especially in South Asia, he said “new lockdowns [bans]” in both national and international routes are very important.

“At least, I urge the concerned authorities of all states to immediately impose a 21-day lockdown to stem the catastrophe of the lethal virus currently passing through its third wave,” said Pavel, who is also chairman of the Bangladesh Doctors’ Foundation.

He claimed that after a partial easing of bans on international flights, COVID-19 strains similar to those in the UK and Africa have been reported in Bangladesh, home to over 165 million people.

Health experts do not view immunization as an immediate solution against the surging pandemic.

“These five countries combined make up over 2 billion of the world’s population. It will take a long time to vaccinate such a huge population, especially when their local health infrastructure is way less developed than that of Europe and America,” Asghar noted.

Citing the vaccination situation in Pakistan, he said that “during the last week, Pakistan averaged 13,196 vaccine doses administered each day. At that rate, it will take a further 3,283 days to administer enough doses for another 10% of the population.” “That is 9 years to vaccinate 10% of population.”

Pakistan’s already sluggish vaccination campaign is likely to take a further hit following a delay in the supply of 17 million doses of the Oxford-AstraZeneca vaccine being provided by the World Health Organization-led COVAX program for developing countries.

The promised vaccines were scheduled to be received by the end of March. But India’s Serum Institute, which is supplying the doses to the world health body, has diverted supplies to meet domestic requirements.

The immunization situation, according to Asghar, is relatively better in India, which has developed its own vaccine, and Indonesia.

New Delhi, according to local media, has administered 60 million coronavirus vaccine doses so far, becoming the second country after the US to reach the milestone.

Indonesia, the world’s fourth most populous nation, aims to vaccinate 181.5 million people within a year.

“Let’s take the example of Brazil, where 50% to 60% of the population had been infected but the variant virus has re-infected a large number of people who had recovered in recent months,” he went on to argue.

Asghar observed that following the safety precautions is the only available option for the Third World countries to avoid a surge in infections.

“In my opinion, for at least the next two years, following the safety precautions is the only option for the people [of developing nations],” he said, cautioning that “the coronavirus is not going anywhere despite vaccinations.”

He also said that offices, shops and shopping centers should completely avoid central air-conditioning for a year or two to mitigate the infections.