“Eventually, we all have to go. All the work we do is for the present generation and future generations to carry forward. They are the inheritors of everything we leave behind. The institutions we establish, remain forever.” – Liaquat Merchant.

The recent MOU signed by the Jinnah Society, the Sindh Government and KCFR (Karachi Council on Foreign Relations) brings to light a very beneficial project for the nation. This project comes not only in pursuit of Jinnah’s ideals, principles, and vision but also now in the form of heritage, art and culture through what is being called a “nation-building” project. The conversion of Quaid-e-Azam House (previously known as Flagstaff House), into an educational museum and Centre for the preservation of the relics which this museum and Nation Building work. This Institute will not only display relics from the private collection of the Quaid but where children and adults could gather learn, and benefit from information about the struggle for Independence and establishment of a separate Homeland for the Muslims.

The Quaid-e-Azam House is located at 241, E.I. Lines, known as Cantonment, in Clifton, Karachi. Situated on the corner of road of Shahrah-e-Faisal, the light brown stone building was designed by the British architect, Moses Somake in the late 1800’s. It contains a garden with a courtyard; arches and pillars which seemed to be a signature trademark reminiscent of Colonial architecture. It measures 10,214 sq. yds together with the construction and the grounds it is standing upon. The founding father of the country, Muhammad Ali Jinnah bought this estate in 1944 from the Katrak family in Bombay India for the sum of Rupees One lac fifteen thousand. This is a beautiful heritage site which although has been preserved well by Federal and Sindh Governments, but lacks anything of interest apart from the aspects of the architecture and a few relics left behind. It has a great potential to be developed further as a national monument. Historically, the house formed part of Muhammad Ali Jinnah’s estate in which he intended to reside in as his belongings were moved into the house from Bombay and Dehli; but he never resided there as his short tenure of life (13 months) was spent as Governor General in the Governor House. 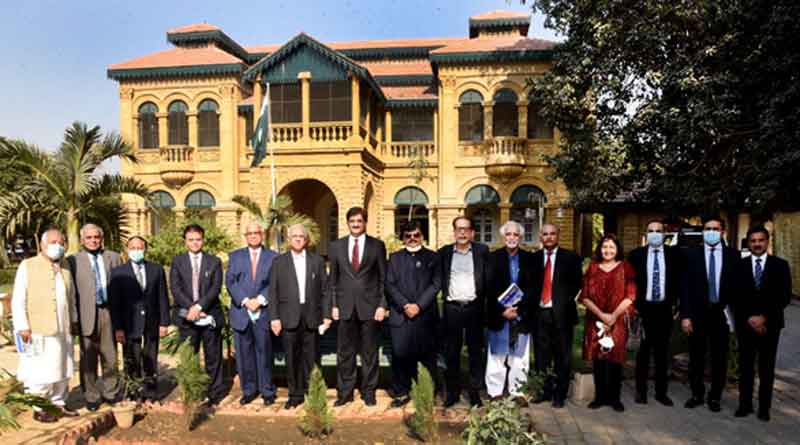 The initial purpose as proposed in 1984 by the then Chief Justice in an Order passed on a Reference by the Administrator of the Estate of Quaid-e-Azam was to allow the Government of Pakistan to acquire the house from the Administrators for setting up of a Museum Library in the name of Quaid-e-Azam Muhammad Ali Jinnah. The Government of Pakistan had the intention to preserve the property as a National Monument to commemorate the memory of Muhammad Ali Jinnah. The property was sold by the Administrators comprising Syed Hasnain Raza and Jinnah’s grand-nephew Mr. Liaquat Merchant pursuant to the Order of the High Court and it was agreed that an Audio-visual Centre would also be established to display films on the Pakistan Movement.

Mr. Liaquat Merchant says that in all fairness, the Government of Pakistan fulfilled its obligations by restoration and re-furbishing Flag Staff House in its entirety including the Garden. However, certain features which were agreed upon were not set up on the scale as had been planned. Mr. Merchant, upon seeing the state of affairs of the house, the plans made for utilization was not being fully realized, started the process in trying to get more active and pursue the case with the Government of Pakistan. He wrote to Government after Government, tenure after tenure over a period of three decades. He finally got a favorable response after the 18th Amendment to the Constitution of Pakistan. Here, the ownership, control and management of Flag Staff House passed from the Federal Government of Pakistan to the Government of Sindh. This year in 2021, the Government of Sindh on the representations made by The Jinnah Society jointly with KCFR, entered into a MOU which provides for establishing a Board of Management for the house to be undertaken as a project to establish and develop an Institute of Nation Building.

The project undertaken is ambitious, as the type of set up they are proposing to provide within the grounds of a national monument have never been undertaken on this scale. Some of the ideas were outlined to be achieved over a 4-year period each, of two consecutive terms. The mandates outline establishing a Public Library to be called the “Jinnah Library”, an Audio-visual Centre, work on expanding the Museum, hold events such as debates, Art Exhibitions, Seminars, Talk shows and other similar Literary events for the benefit of the citizens and younger generation. All activities that may contribute as a nation-building exercise in Pakistan by dissemination of information on historical events leading to the creation of Pakistan.

On a question why was this so important to him at this point of time in life, he said, “During the past 55 years in Pakistan, I came to a conclusion that no emphasis was being given to Nation-Building. Nation-Building which inter alia, involves dissemination of information and historical facts leading to the creation of Pakistan and inculcating in the younger generation a sense of integrity, honor, respect for the law, civic sense, tolerance, unity, faith and discipline in order to build a strong Pakistan.

Nation-building has been coming up as a term now more than ever as Pakistan works on the root level for progress. It is noted that more than 50% of the population of Pakistan is presumably under the age of 30 years and there is a microscopic minority of Pakistanis who were born prior to 1947 and have seen the movement and struggle for independence.

A special note must be given about the Sindh Government which has acted with great foresight into taking steps for establishing this relationship, to build something for the benefit of the country along with concerned citizens.

The writer is known for her articles on Cultural Impact