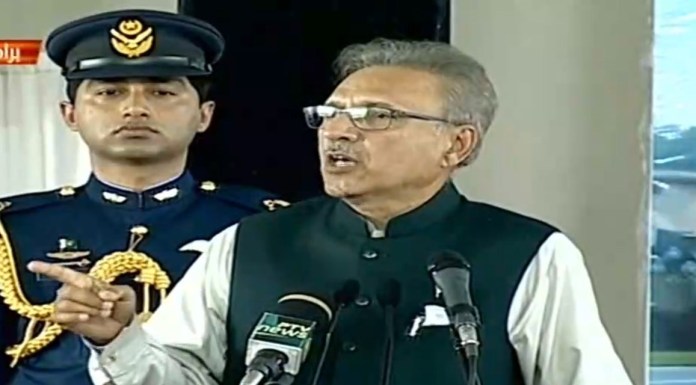 SHORKOT, Feb 25: President Dr Arif Alvi Thursday cautioned India not to take Pakistan lightly as the Pakistan Air Force (PAF) was second to none having proven its efficiency by shooting down an Indian aircraft in Balakot area on February 27, 2019.

“My head lifted with pride as to how you performed, and how you reacted and shot down an Indian aircraft inside Pakistan. Pakistan Air Force is tested.

Chief of the Air Staff Air Chief Marshal Mujahid Anwar Khan was also present in the ceremony, which marked the distribution of awards among air force veterans for their services for the motherland’s defence.

The president said having faced tremendous difficulties, Pakistan during the last several years, had learned how to remain united.

He said Pakistan was the only country to manufacture aircraft and fly those, besides having a distinction of eliminating terrorism which many other countries, including the super powers, could not do.

Pakistan, he said, remained successful against terrorism because of its valiant armed forces and the sacrifices of its around 100,000 citizens.

President Alvi said India remained a belligerent state despite Prime Minister Imran Khan’s offer for peace. Indian in fact was falling into the pitfalls Pakistan had climbed over. However, Pakistan would never be happy over the instability of India as any such situation also impacted the neighbours.

Dr Arif Alvi paid gratitude to the Air Chief for the remarkably contribution of PAF to the nation’s defense despite that fact that the country had a belligerent neighbour with more resources than Pakistan.

The president recalled the remarkable contribution of the PAF as an organization and lauded its workforce, who had “shown light” in many sectors.

He said the PAF produced heroes like M M Alam, and also recalled the professional competence and honesty of Air Marshal Asghar Khan.

He disagreed with the notion about the failure of Asghar Khan in politics and said for him, he stood successful for portraying morality.

He said the PAF had told the world that they were the masters of their destiny and also exhibited their competence to defend the nation.

He said in true compliance with the Quaid-e-Azam’s words, the PAF had proved to be second to none by adhering to his golden principles of ‘faith, unity and discipline’.

He said the Quaid-e-Azam had been a strong proponent of Hindu-Muslim unity and similarly, Imran Khan also called for peace in the region.

He reiterated that Pakistan desired the resolution of Kashmir dispute in accordance with the resolutions of the United Nations Security Council guaranteeing right to self-determination to the people of Kashmir.

The actions like isolating 14% of its minorities were feared to take India to internal instability, he added.

The president said keeping in view the changing conditions, the PAF would have to enhance its capability to come up to the modern day needs.

He congratulated Air Chief Marshal Mujahid Anwar Khan for leading an organization, which had performed “so well”, which the government would also recognize at the annual investiture ceremony scheduled on March 23.

The president said with all indicators, including economy and anti-corruption efforts, Pakistan was set to emerge as a great nation within a decade.

He said the future competition was all about intellectual game and emphasized to achieve excellence in artificial intelligence and computing.

He said even during COVID-19, Pakistan survived just because of the discipline it had showed and the efforts to serve the poor people hit by the pandemic.