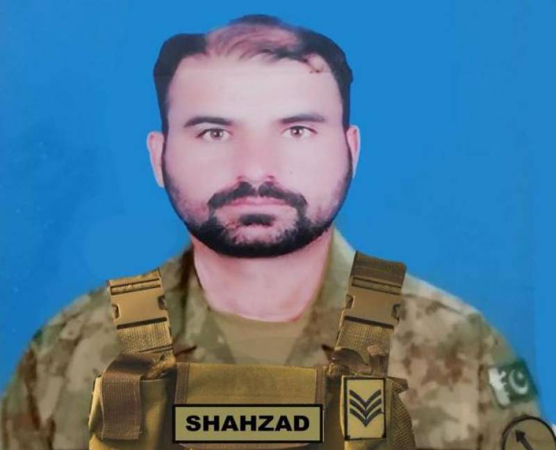 A soldier of Pakistan Army on Saturday embraced martyrdom and two terrorists were killed during an intelligence based operation (IBO) carried out in North Waziristan.

The military’s media wing in a statement said the security forces conducted an IBO on terrorist hideout in MalikKhel, North Waziristan. During intense exchange of fire, two terrorists including a terrorist commander Rehmat alias Khalid, were killed. The martyred soldier was Havaldar Shehzad Raza who embraced martyrdom during exchange of fire while fighting the terrorists.

Meanwhile, funeral prayers of four soldiers, martyred by terrorist fire in South Waziristan and a bomb blast in Balochistan, were offered and they were laid to rest in their native villages with full military honour.

Funeral prayers have been offered for three soldiers who embraced martyrdom as a result of terrorist fire at the Sararogha check post in South Waziristan. Funeral prayer of Shehryar Khattak was offered at Manzini Banda, Shahid Anwar’s at Mohabbat Kila and Shehzad Hassan’s funeral prayers were offered at Sabirabad.

On the other hand, Afrasiyab Khattak, the FC soldier who was martyred in a bomb blast in Balochistan, was laid to rest in his native town of Gadi Khel.