Minority rights in India and Pakistan

As Pakistan was created out of India, to secure the rights of the Muslims, which were then a minority in that country, but had now become a majority in the newly created state of Pakistan, where there existed other religious minorities as well, right from the outset, Quaid-I-Azam, Mohammad Ali Jinnah, the first Governor General of Pakistan, made it amply clear in his speeches that all minorities in Pakistan will have equal rights. He had asserted, “As citizens of Pakistan, we have equal rights, privileges, and obligations, irrespective of colour, creed, cast and religion. You are free, you are free to go to your temples, to mosques or to any other place of worship in Pakistan. We should always be guided by the principles of justice and the fair play without any partiality or favouritism”.

Since independence of Pakistan and India in August 1947, it is quite evident from the projection of the world media and the reports of the international minority rights groups, that as compared with India, where minorities are facing the danger of losing their citizenship and their life and properties are under threat, in Pakistan the rights of the minorities are much better protected and they have full freedom and opportunities to exploit. Whereas the Indian minorities have suffered a lot out of the hands of the Hindu majority, the successive Indian governments, its police and Judiciary, have also badly failed to protect the their rights. Rather, they have been sympathetic to the Hindu majority, did not prevent them from violating minorities’ rights, and the Judiciary did not provide justice to the wronged minorities.

In this context, some major examples of trampling of the minorities’ rights by Hindu majority Zealots in India are: the demolition of the historic Babri Mosque in Ayoudhya in 1992 openly; incidents of the lynching of the Muslims on cow rearing; attacking the Christians to force them to convert to Hinduism; attacking the Sikhs’ holy Golden Temple in 1984; killing of Delhi Muslims to crush anti CAA protests in February 2019; and India’s state terrorism in Jammu and Kashmir since 1947, dividing the state into two union territories on 5 August 2019 in utter violation of the UNSC resolutions on Kashmir, locking down the state, arresting all leaders and the youth and the ongoing genocide of the Kashmiris by the Indian security forces.

The Indian minorities have suffered a lot out of the hands of the Hindu majority, the successive Indian governments, its police and Judiciary, have also badly failed to protect their rights

On the other hand, evidence shows that the minorities in Pakistan have full right to participate in the national life to exploit their full potential and their rights are better protected. And, the violators of minorities’ rights in Pakistan are openly condemned by the governments and punished by the Judiciary. Following examples indicate the success story of some of the minority personnel. As mentioned by Fahad Chohan in the Express Tribune dated 3 June 2020, Pakistan’s first foreign minister, Zafarullah Khan, was an Ahmadi. Dr Abdus Salam, a Nobel laureate in science, was also from the Ahmadiyya community. Justice AR Cornelius, a Christian, has been the country’s first non-Muslim Chief Justice of Supreme Court.

Justice Rana Bhagwandas, from a Hindu family, served the country as Supreme Court judge as well as the acting Chief Justice of the apex court. Anil Dalpat and Danish Kaneria, two Hindu cricketers, donned the Pakistan cap in both Tests and ODIs. Also, a large number of non-Muslim personalities have contributed to Pakistan’s progress as educationists, legislators, soldiers, doctors, lawyers, sportsmen, artists and businessmen.

Apart from the above opportunities provided to the minorities, Pakistani governments have been struggling to protect their rights. And, whenever some violation of the rights occurred, Pakistan’s legal system came into play, the violators were taken to task and the threat of legal action deterred the violators from committing such crimes in the future. Still, in view of some concerns over religious freedom in Pakistan, the current government in Pakistan is quite concerned for ensuring that minorities’ rights are not violated. And, wherever those are violated, the violators are given punishments.

Since its coming into power, the PTI government has vowed to protect the civil, social and religious rights of minorities, their places of worship, property and institutions as laid down in the Constitution of Islamic Republic of Pakistan. In this context, due to limited space, I will quote only two recent examples to show PTI government’s resolve to protect the rights of the minorities.

In February 2020, the PTI has suspended the general secretary of its Lahore chapter over posters that featured an insulting slogan targeting Hindus. Mian Akram Usman put up the poster in connection with Kashmir Solidarity Day, which insulted the Hindu community. Then for that mistake, Mian Akram apologized from the members of the Hindu community. Human Rights Minister Shireen Mazari in a tweet said Mian Akram Usman had been “reprimanded and posters were taken off immediately”.

In February 2020, the government of Pakistan has handed over a 200-year old temple in District Zhob, Balochistan to the country’s Hindu community. This action of the government is praise worthy in comparison to the Indian Supreme Court’s ruling in November 2019 for handing over the site of the historic Babri Mosque to Hindus for the construction of a temple following a prolonged legal battle. The foregoing discussion indicates that in Pakistan, the rights of the minorities are being protected in a much better way than in Modi-led, RSS inspired, BJP ruled India. 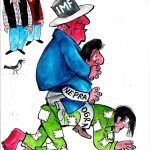