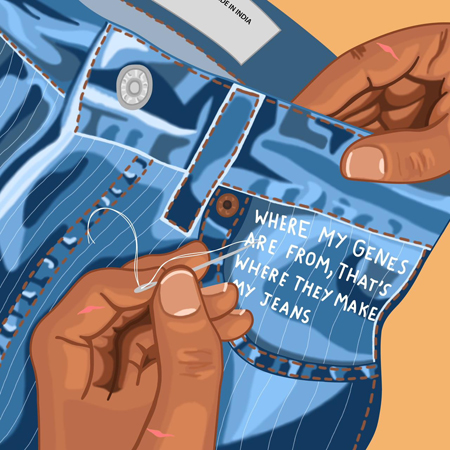 Following on from his recently acclaimed album, a close-up look at the breakup of a toxic relationship with the country you call home, Riz Ahmed’s ‘The Long Goodbye’ Livestream Edition, which premiered online in December, blends storytelling, music, archive footage and immersive sound guiding audiences through an emotional landscape.

Unravelling the album tracks, it tells the story of this moment through a personal journey and asks: ‘how did we get here?’

Manchester International Festival and Fuse, a platform focussed on elevating the voices and work of creatives of colour, commissioned artists working across photography, illustration and collage to create responses to The Long Goodbye Livestream Edition. The artworks from the four Manchester-based creatives Jaheed Hussain, Urooj Ahmad, Saidul Choudhury and Grace Maisiri range from symbolic and surrealist imagery of identity to visual representations of the very real fear of racial attacks and the West’s appropriation of South Asian culture. Mark Ball, MIF’s Creative Director said “When we support internationally established artists like Riz Ahmed we’re always interested in how the artist and the work can intersect with and inspire the creativity of artists in Manchester and Greater Manchester. These vivid visual responses to The Long Goodbye from Jaheed Hussain, Urooj Ahmad, Saidul Choudhury, Grace Maisiri speak powerfully to the issues of belonging, migration and identity in Riz’s work and illustrate the depth of creative talent here.”

Jaheed Hussain describes “The cultural significance of the project resonated with me massively, being a child of immigrants and being of Asian-British Bangladeshi heritage. I was born in Oldham, Greater Manchester and its home. However, my genetic roots are from a whole different country. My collages represent ‘belonging’ and a representation of introspective conversations I’ve had with myself about where I’m from. The Long Goodbye talks about feeling unwelcome in the UK, despite being born here, because of our cultural identity. To me, our identities belong in several places at once, despite where we may be right now and where we came from and that’s what I wanted to capture.”

Urooj Ahmad said “Growing up South Asian in Western society was very difficult and the older I got the harder it was to find the balance where I fit in both places. This series of illustrations depicts the deep history embedded within my South Asian roots, portraying the reality of the diaspora and what many of us have to go through on a daily basis.”

Saidul Choudhury explains “I was interested in doing this project because living in Manchester within my own community I felt safe, but once I had to start travelling out of the area for other commitments and work, I noticed how low my confidence was, particularly while commuting. When something major has happened in the news in the name of my religion is when I’ve felt the lowest and judged as though many were confronting me with their eyes, but as I’ve become an adult and outgrown my fears I feel normal and know I’ll always be part of my city no matter what.”

Grace Maisiri comments, “No matter who you are or where you come from, home is where the heart is. Home is where you feel safe and are able to expand your roots. From Africa to the United Kingdom, this planet is home, and it doesn’t matter what you look like, where you are from or what you do as long as you put a stamp on this planet with love in your heart.”

Developed especially for the digital realm the online edition of The Long Goodbye Livestream Edition is a companion piece to the live stage show commissioned by Manchester International Festival (MIF) and Brooklyn Academy of Music (BAM) that was originally due to premiere in Manchester in March 2020 before COVID-19 led to its postponement.

The Long Goodbye Livestream Edition is now available to watch at mif.co.uk until 1 March on a pay what you feel basis.

Fuse is a creative platform dedicated to creating change. Beginning as part of a final-year student project in Manchester, 2019, Fuse now expanded to include chapters in five countries, including cities such as Barcelona, Berlin, Birmingham and Leeds with hosts taking charge of each one – aiming to represent and empower creatives from marginalised backgrounds. Fuse also hosts events, a digital features feed and city-specific directories of creatives.

Manchester International Festival (MIF) was founded as the world’s first festival of original, new work and special events and is an artist-led festival reflecting the spectrum of performing arts, visual arts and popular culture. The next Festival takes place 1-18 July 2021.