Are Elite’s drivers to be blamed?

Recently, three out of four poor young chaps, who came all the way from Mansehra to try their luck in a written exam for the Anti-Narcotics force, met their end in a fateful night car-accident on Islamabad’s Srinagar Highway. To save, perhaps few bucks, they all were travelling in a Mehran car (worth less than a million rupees). Unfortunately, they were not given a chance or a moment to realize what was about to hit them. Had they spotted – even from a mile distance- that a forty million (four-coror) worth Lexus-SUV, with govt protocol, was hurling towards them, they wouldn’t have dared to move their car forward an inch, even if the traffic signal had clearly been green for them.

To all appearances, two factors – the lack of clear visibility (caused by the night and inadequate road lightings), and the ‘Fate,’ or, as condescendingly tearful Kashmala Tariq put it, the Manhoos Ghari (an ominous moment), responsible for the heart-wrenching accident. More so, Kashmala, in an attempt to exonerate herself and her family, laid the blame on both the drivers for their negligence, while conveniently avoiding the fact of her driver’s overspeeding the Lexus. Regardless, Kashmala deserves admiration for not bringing herself to tell the reporters (gathered at her residence) that the poor souls, crushed under her Lexus, should have been driving a high-trim level car, equipped with multiple airbags and full safety-features, including advanced collision warning system.
Anyhow, let’s not be reticent in blaming Kashmala’s driver, if we must, and if he really was on the driving seat. His trial and conviction would certainly close the chapter and would help us to blot-out the painful images of the accidents from our collective-memories. Granted, but this will not rule out the possibility of similar accidents snuffing-out more innocent lives. It is, therefore important to ask and understand why do elite’s drivers drive recklessly?
Although, elite’s drivers are neither stranger nor new to our society yet their rash and reckless behaviour is clearly suggestive of something a novelty. This novel behaviour cannot be understood in isolation. It rather reflective of broader socio-cultural changes that began to take place in 1980’s and continued till date. Apart from other evils, these changes particularly produced a new class of so-called elite. This new elite is radically different from the ‘old-elite’ – both in its character and social-conduct – and so are their drivers and guards.
Largely descendants of British quisling, the ‘old-elite’ took on the mantle and the mentality of their former colonial masters, mimicking not only their elitist manners but also keeping the same social-distance that colonizers kept between themselves and their subjects. Notwithstanding, the ‘old-elite’ of Pakistan also excelled and improved upon the conduct of their professional duties and social responsibilities. They would not only prefer to spend most of their free time in their own collectively-shared exclusive cocoons, such as, gymkhanas. They also preferred to establish and maintain a distinct elite-identity through intellectual-excellence and literary contributions.
Their immaculate manners, intellectual and literary inclinations and contributions often inspired awe and envy among the masses, while their insulated and out of sight life-style hardly drew any resentment. This made them least dependent on few ‘selected-unprivileged,’ such as, drivers and guards, for the production, protection and assertion of their elitist identity. Instead, the few ‘selected-unprivileged’ had to mimic and follow the immaculate manners of their Sahabs and Begun-Sahabas (Sirs and Madams). One just need to watch few old PTVs dramas that aptly predict the humble, law-abiding and conscientious characters of drivers and guards of the ‘old-elite’.
However, the ‘new-elite’, albeit few exceptions, represents a contorted-form of the ‘old-elite’. Some are beneficiaries of 1980’s and 1990’s and 2000’s political-systems that weakened the institutions and transformed the entire cultural and economic landscape of Pakistan. While, others simply climbed up the ladder with their wealth, procured through extortion, money-laundering, land-grabbing, forgery and theft; the hallmark of a typical ‘Mafia’s composition.
In particular, the majority of this new so-called elite bears an illiterate or semi-illiterate character. This character debilitates their capacity to join, let alone, form intellectual or literary-circles, which could have enabled them to forge an exclusively shared sense of elitist-identity.
Thus, devoid of such essential and historic characteristics, the ‘new-elite’ has become heavily dependent on its wealth and power. However, since they cannot disclose or share the secrets and dubious sources of their wealth and power, they turn towards the hapless masses, displaying their special perks and privileges to them. This is, perhaps, the only way, they can establish their elite identity and be acknowledged as a privileged class. And this is where ‘few-selected unprivileged’, such as, drivers and guards come into play because they are highly instrumental in translating elite’s wealth, perks and privileges into power.
In this regard, the few-unprivileged are made to act like a hedge and hedgehammer against their own fellow unprivileged. Or in other words, they are made to behave like trained-bullies who are asked to bark and, in some cases, are unleashed to frighten and discipline the wretched of the Islamic Republic of Pakistan. In the course, the few unprivileged feel more powerful and influential among their unprivileged-fellow beings.
This rather borrowed sense of empowerment makes them more willing to please their masters/bosses by intimidating the poor masses. Consequently, the few unprivileged find it pleasing to mimics and imbibe the arrogant behaviour of their rather ‘over-dressed but under-educated’ Messieurs and Madams. One of the signs of this arrogant behaviour is palpably obvious in the reckless and rash driving style of elite’s drivers, as might have been the case with Kashmala Tariq’s driver. But will blaming and convicting him make any difference in the elitist culture?
Blaming and Convicting Kashmala’s driver (if he was really driving) will only add more sufferings and pain to another poor-family. As for Kashmala and elite class, drivers and guards are not only dispensable but also replaceable.

The writer is a former Ph.D., scholar at University of Leeds, England
[email protected] 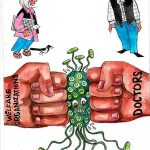