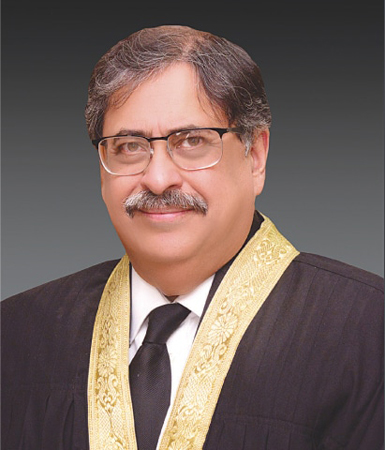 Islamabad High Court Chief Justice Athar Minallah has written a letter to the Pakistan and Islamabad bar councils regarding the issue of attack on high court building by lawyers earlier this week.

The Chief Justice of the Islamabad High Court wrote a 15-page detailed letter to the bar councils. In the letter he stated, “I assure you that the humiliating incident will be brought to an end. Responsible must be dealt with severely to prevent such a tragic incident in the future. Time demands that bar councils also break the silence and establish a new tradition.

He added that bar councils must establish dignity of judiciary by strict accountability of bad elements. The whole nation is looking to bar councils to take action before it’s too late.

In the letter Chief Justice wrote that, on February 8, a mob of lawyers stormed the Chief Justice’s block and chamber.

The on-duty security officers asked me to leave the block. Within thirty minutes of the incident, other judges also reached my block. At 12:45am security staff evacuated the chamber and the Chief Justice’s block.

He wrote that “no one, including me, is above the law”. “Lawyers are the guardians of the law. It is the responsibility of every lawyer to be a role model for society. A few mischievous lawyers bowed their heads in shame. I hope that Pakistan and Islamabad Bar Councils will take action against such lawyers. The letter was accompanied by photos of the damage caused by the lawyers’ raid.”

The Chief Justice observed that he was surprised to see Hammad Saeed Dar advocate among the group of violent lawyers who had attacked the IHC. He said Hammad Dar was very aggressive among the lawyers’ mob. It was the IHC which had given relief to Dar when he was kidnapped on January 2, he added. Chief Justice Minallah said it did not matter if 200 out of 6,000 lawyers were involved in the violent incident, which had disgraced the whole fraternity. He expressed these views while hearing the case regarding the disappearance of Hammad Dar. The petitioner’s lawyer, Abdul Rafay, said it was an unfortunate incident.

It may be mentioned that Hammad Dar’s father Sufian Dar had approached the IHC when his son had disappeared on January 2. Dar was recovered on January 4, on the directives of the IHC.