Lawyers coerce judge to punish a man accused of blasphemy

Lawyers of the District Session Court of Mirpur attempted to violently attack the judge who granted bail to an alleged blasphemer.

A man in Mirpur posted something on social media, something seen through the lens of offence sparked, and had sparked a controversy. It led to lawyers ganging up and employing violent tactics to pressurize the judge in their favour after it grants him a bail.

A case of chaos

Syed Wajid Ali Kazmi, 52, was accused of uploading some supposedly “blasphemous” content as poetry on his Whatsapp status. A father of six and a man with no past criminal record, Wajid Kazmi also served as the former general secretary of an interfaith harmony body in Mirpur.

While there was progres on the case, memberships of four lawyers who were fighting Kazmi’s case, were suspended by the District Bar Association of Mirpur. Strangely they lost their membership for representing someone seen as a ‘blasphemer’. Although, according to the Legal Practitioner Act, lawyers are permitted to even fight the case of an alleged murderer. 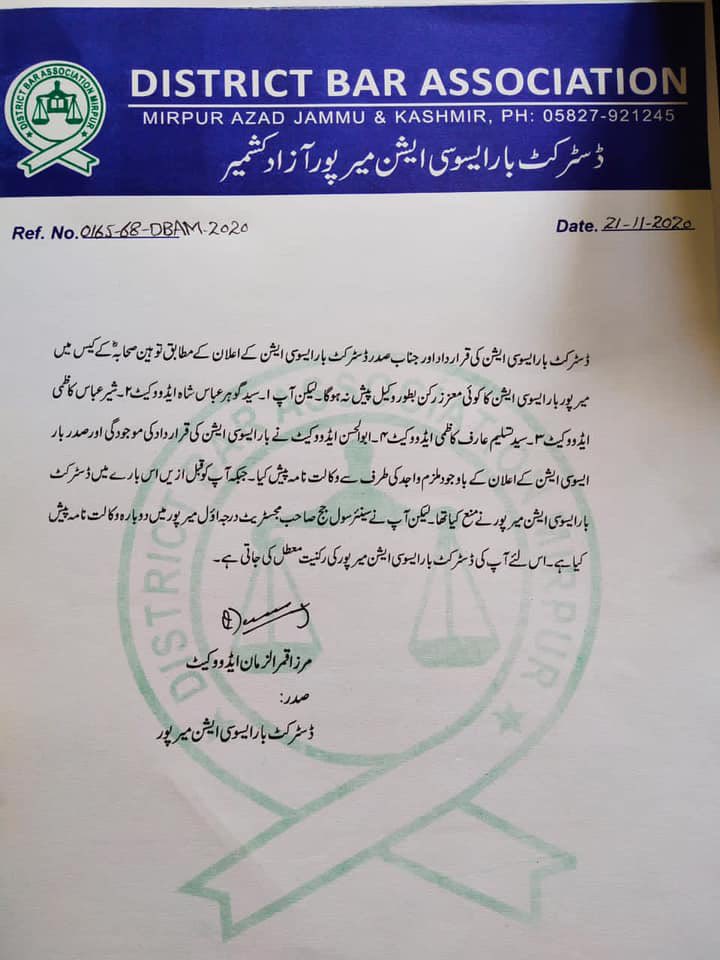 Gohar Abbas Shah was among the lawyers of this case. In a conversation with Ravadar he said, “I have been active as a practicing lawyer in Mirpur for the past 13 years but never encountered such a situation”, he continued “the right to fair trial and legal assistance is constitutionally guaranteed to every citizen of Pakistan.

“Even foreign agents like Kulbhushan Jadhav are allowed to hire a lawyer but an alleged blasphemer was not allowed to avail the option, and thus unjustifiably deprived of his basic right”, Gohar shared.

A few days before the verdict for Wajid Kazmi’s bail request was to come out, a social media trend was initiated. In it people were requesting the ‘believers’ to storm the court on the verdict day. Defunct Sipah Sahaba (SSP) and Tehreek Labbaik Pakistan (TLP) were believed to be the drivers of the campaign.

On the morning of 29th November, the court of Mirpur was swarmed by lawyers along with their supporters and all were anxiously waiting for the decision. As soon as the judgement was released, in which Wajid Kazmi was granted the bail, a large number of lawyers turned violent and tried attacking the judge who announced the verdict.

A few men from the mob kicked the door of the judge’s room while others hurled abuses and chanted hate slogans against the judge inside the court premises. For two hours, the session court echoed with ‘Judge Kaafir’ and ‘Judge Kutta’ slogans. Local Police were called to vacant the court premises from the protests after which they staged a short-term sit-in on a nearby road junction.

The very next day, an application was submitted to the High Court requesting suspension of the bail order. The application was accepted and Wajid Kazmi’s bail was suspended. The High Court also transferred the case to a higher bench in Muzaffarabad due to its sensitivity. The judges at the session court of Mirpur observed the day as a strike against the violence and attempted attack on the judge. 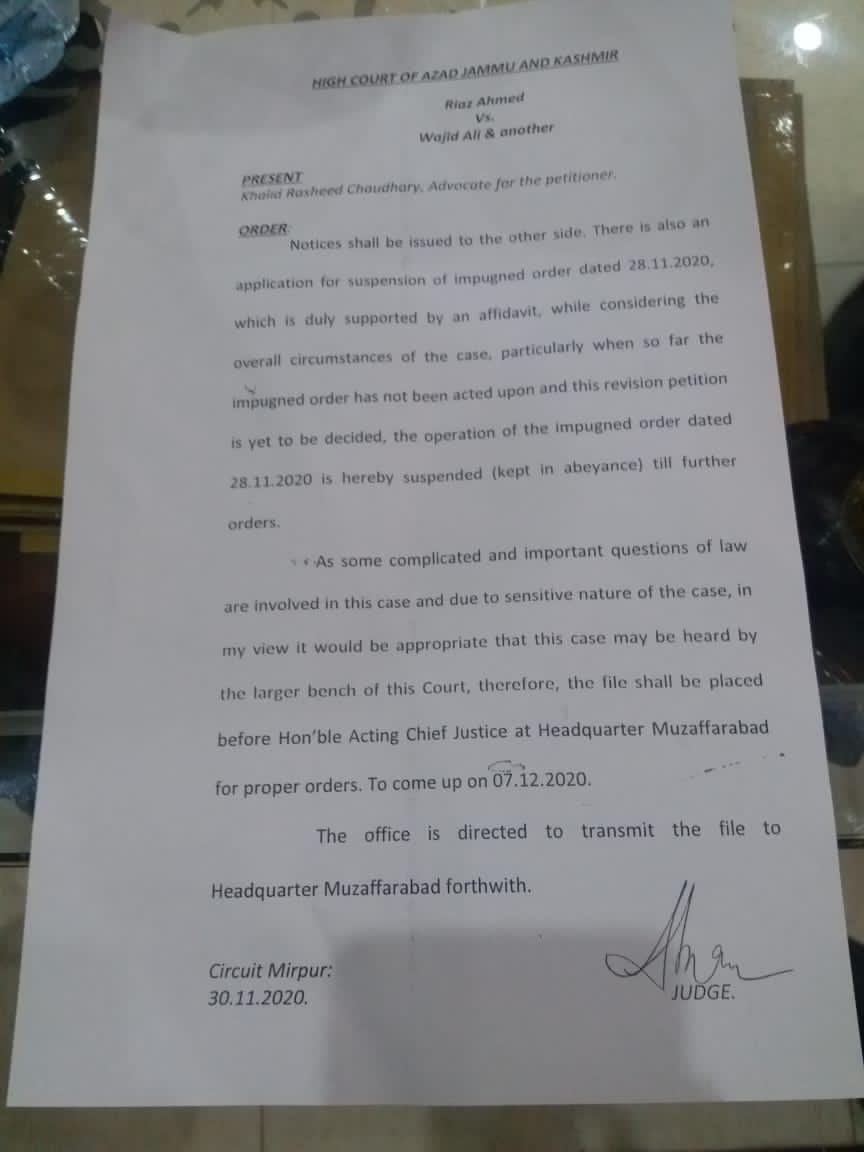 Although a few lawyers were arrested in the following days for their violent activities inside the court, they were soon released on bail with wreaths around their heads and no actions taken against their memberships of the bar council. 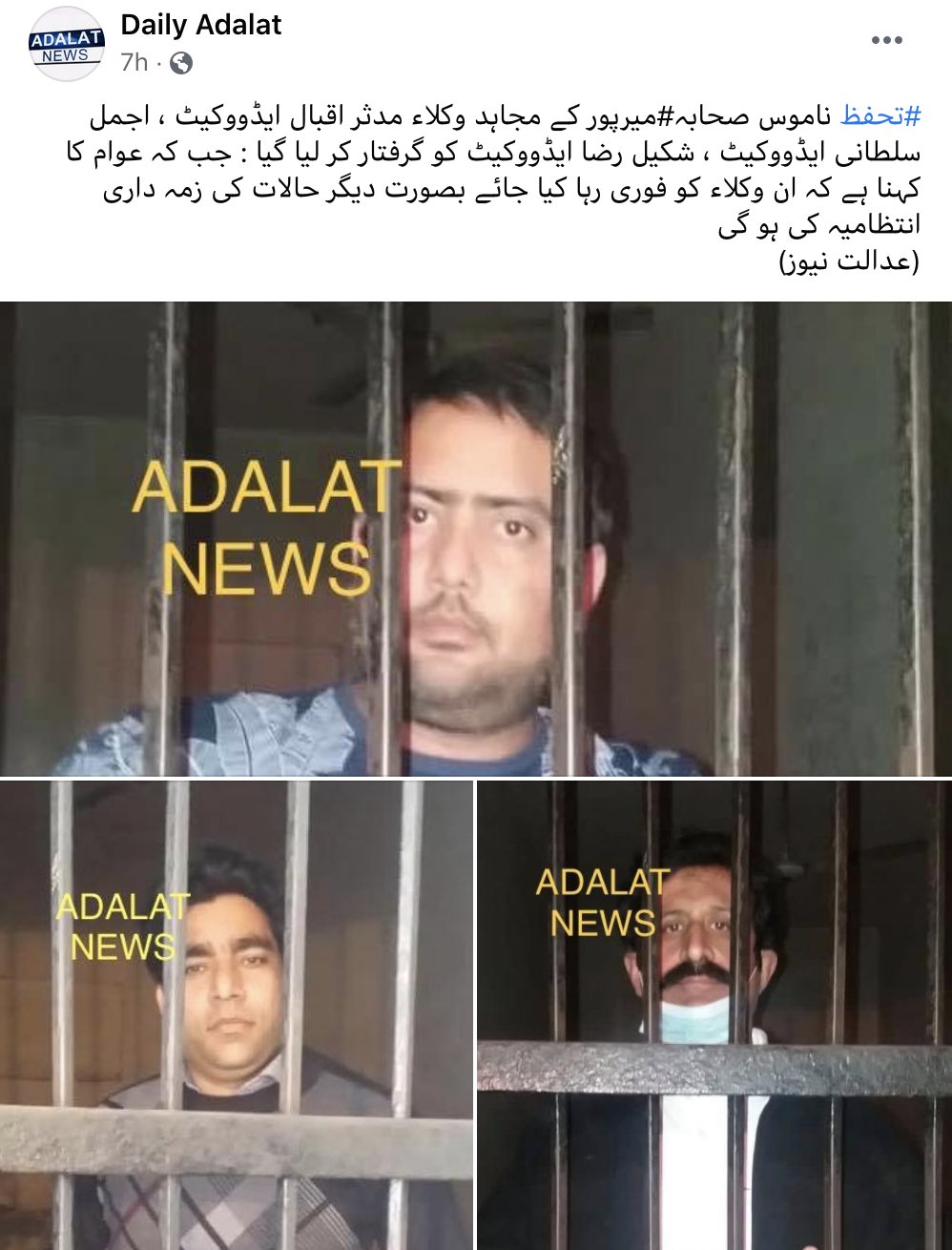 Basheer Ahmed was among the lawyers fighting Wajid Kazmi’s case. “I belong to the Sunni sect yet I filed my power in his support. Why? Because I found him innocent.” He commented on how the local hate-mongering outfits tried shaping it into a sectarian issue, which it wasn’t. “It’s the spirit of justice which concerns me”, Basheer added.

Describing the harassment he had to face, he shared with a heavy heart that the majority of the advocates have stopped talking to him including those he maintained a good relation with throughout his career.

“If lawyers resort to violence then who will uphold the law? Citizens look upto lawyers as rational beings and do not expect such impulsive acts. As a lawyer, my head is hung in shame today”, Basheer told Ravadar. “Lawyers chanting slogans demanding the head of the alleged blasphemer, that too inside the court premises, is dangerous and stands in stark contrast with the very essence of their profession”.

“Since the first case hearing, lawyers and men from terrorist outfits appeared in large numbers at court to pressurize the judge. It is against the law to pressure the judges through such tactics”, Gohar shah explained, and with a hint of disappointment commented on the culture, “As believers, shouldn’t we be rather pleased at a judgement that states the blasphemy of Holy figures never happened instead of turning violent at such a judgement?”

Lawyers forum active for all the wrong reasons

Khatm e Nabuwwat lawyers forum, a Punjab-based platform, was formed 20 years ago. Led by Ghulam Chaudhry, defense lawyer of Mumtaz Qadri, the body’s mission is to ensure trial and punishment to every person accused of blasphemy. During legal trials, members of the forum fill the courtrooms in hordes, and often shout slogans or use other tools to intimidate and pressurize the judges.

There are more than 700 lawyers in this conservative alliance, and the members keep an eye out for any blasphemy accusations and offer to fight the case for free. It is believed that the forum is a major factor behind the spike of blasphemy cases in the country.

Jurists targeted in the past

In 2014, Human Right Activist and Advocate, Rashid Rehman was shot dead at his office after he agreed to take the case of Junaid Hafeez, a university lecturer accused of blasphemy. Despite receiving threats and constant pressure by the extremists, Rehman had filed his power of attorney after no lawyer agreed to take the case. Throughout the course of the case, seven judges were transferred before Junaid Hafeez was finally sentenced to death in 2019.

Two years back, the judge who sentenced Mumtaz Qadri, murderer of Salman Taseer, to death flew from Pakistan after receiving life threats. Taseer, then Punjab governor, was shot 27 times by his own gunman after he thought him to be ‘undermining the Blasphemy law’. Advocate Saif Ul Muluk who fought Asia Bibi’s case was also forced to

Arif Iqbal Bhatti, one of the judges who acquitted two Christians accused of blasphemy, was murdered inside his chambers in 1997 after receiving death threats for two years.

In Pakistan, alleged blasphemers not only lose their right to fair trial but any advocate taking up their cases are harassed, threatened and is looked down upon in legal circles. According to the International Human Rights Law as well as Article 10-A of the Constitution of Pakistan a criminal offender gets the right to fair trial but merely accusations of blasphemy could result in an intensely adverse aftermath.

In an environment where judges are intimidated to rule against the alleged blasphemers and lawyers are murdered for taking up their case, justice seems far from delivered. From public lynchings in universities on to victimization of jurists inside the courts, blasphemy allegations remain one of the dark nightmares, especially for the oppressed minorities.

The blog has been published in collaboration with Ravadar – a series that documents lives of religious minorities in Pakistan.