Author says time is fleeting, transient and is a complex phenomenon

* This reviewer recalls that he witnessed in Houston, Texas some American citizens standing below a bridge with placards stating that they were homeless, asking for some monetary help 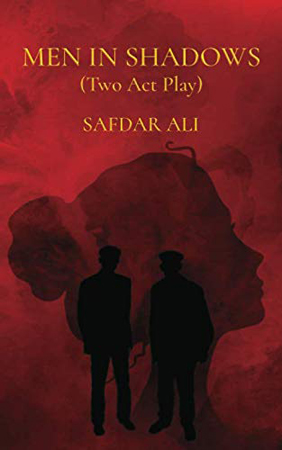 The book titled Men in Shadows is written in English by Safdar Ali, a retired professor.

His last position was in FC College, Lahore. For an intellectual like Safdar who spent his career teaching students, writing in English and selecting white skinned characters is a very commendable task. What other occupation could be there for him than to write fiction on homeless people. He has chosen two characters that are homeless in a chilly December backdrop in England. On this reviewer’s query as to why the writer chose not to write on this age-old problem in his own country, his comments were that in Pakistan every other person seems to be a victim of this societal disease. In UK after spending six months, he observed the psychological problems of the homeless people more closely.

This reviewer recalls that he witnessed in Houston, Texas some American citizens standing below a bridge with placards’ stating that they were homeless, asking for some monetary help. Even in Mukkah tul Mukarama in Saudi Arabia, he saw many male and female beggars below a bridge asking for alms. They were mostly black skinned, the off-shoots of original inhabitants. In Pakistan even today one comes across professional beggars near traffic signals asking for money. Even transgender are seen in this lot. Before proceeding further this reviewer shall quote some figures taken from November 19, 2019 issue of Britain’s paper ‘The Guardian’ on this issue.

“Nine months ago we set out to look at the sharpest end of homelessness – not simply those who live on the streets but those who die on them or in emergency accommodation. Homelessness had become omnipresent in Britain. According to the last Shelter report, at least 320,000 people are homeless, almost 5,000 are rough sleeping and 726 people died homeless in England and Wales in 2018. In fact, today the only way you can ignore homelessness in the UK is by averting your eyes. When, for the first time, statistics were released about the number of people who had died homeless, it was incredibly important. All of the people who died were addicts, and many were born into troubled families. Many might have died anyway, but every time we also came across a failing by a statutory body or charity that could have made the difference between one of these people living and dying”.

The reasons of homelessness and the tragic reasons are many. The Guardian report adds “A decade ago, as mayor of London, Boris Johnson pledged to end rough sleeping in the city within three years. In 2009, he tweeted: “It’s scandalous that in 21st century London people have to resort to sleeping on the streets.” Yet since then, the figures have rocketed.

In Pakistan, one finds government sponsored Panagah opened by the Prime Minister of the present government, scattered in big cities. One finds free meals given to the poor by the rich or by some charity trusts at many places in Lahore and other large cities. More than 200 million people live in Pakistan; 35 percent of the population lives under the poverty line. It is estimated that there are roughly 20 million people lacking adequate housing, with the majority living in slums and other forms of temporary housing.

Safdar Ali’s book ‘Men in Shadows’ is a two Act Play written in English language on the plight of homeless people. The time is somewhere in 2020. The two main characters are Jason Adams who is 73 years old and Allen John, 72 years of age. There are four scenes in ACT 1 and 5 in Act 2. The location is veranda of a typical British grocery store where homeless Jason lay in foetal position on bedding comprising a sleeping bag. With a dishevelled look, his face is thin and lined. Another seemingly homeless character Allen John enters the scene and is met with disinterested and unwelcome look by Jason. When not ready to greet Allen, he was reminded that both had met in Council’s office the previous year where they talked of their respective worsening conditions. Jason’s utterance that they met in Hell disturbed Allen. Jason reveals that he is a University dropout. ‘So am I’ reveals Allen. Allen not only begs for a fag but also requests if he could also sleep in Jason’s company because sleeping in open in the chill of a December night penetrates in his bones. Jason refuses and tells Allen to come the next day.

Regarding the philosophy behind the concept of time, the author says time is fleeting and transient and is a complex phenomenon. His father used to tell him that time they lived in was man-made whereas it was an indefinite phenomenon. Man finds himself like a little log in the turbulent flow of time. Allen on his second visit to Jason becomes philosophical. His rhetoric gets esoteric. Jason accepts Allen’s company and asks him to bring his luggage if any. An hour after Allen returns with his luggage and grubs. Jason seems happy in the company of Allen; the latter observes that when we commit a mistake when we search for happiness in other people whereas happiness furtively stays inside. Allen appreciates Jason’s art of expression, especially when Jason reveals that he wanted to be a writer.

In the scene 3 of the play, both agree to talk on any mutually agreed topic especially after some philosopher had observed that life is a constant pain, and when some interlude occurs, that is happiness. So they agreed to talk on women and sex. Both exchange their experiences with each other. In scene 4, Allen narrates his smooching experience with a woman in La Palma in Cannery Island, a biosphere declared by UNESCO for unique star gazing. They also enjoyed looking at a waterfall of wandering and fluffy clouds that cascade down from the highest central mountain of the island. Allen also shares the colloquial words used by female sex workers and ends up his experience of a failed episode with a sex worker when he watched her going bare.

In Scene 1 of Act II the details of a beautiful woman trying to speak to Jason and two young and attractive girls from ‘Human Touch’ a charity organization enter the scene. They provide Jason a lunch box and a packet of clothes. These girls desire to take Jason’s interview. He shows willingness and says that he is reluctant to be a part of mainstream life by saying that it was too late for him to weave his life into the social fabric. Jason complains that the solution to the problem of homeless persons was more distant as ever as they had disappeared from public eye. He said that if poverty was eliminated, things shall automatically brighten up. The girls asked him to align him from among four categories; chronic, episodic, traditional/situational and hidden. He declared that his condition was chronic with a disability. “Even the City Councils do not talk about the whys, how and what of our condition” stated Jason.

The conversation with the interviewing girls reveals that homeless persons seek an identity which is in crisis. The reasons of homelessness of Jason were downsizing in his factory and immediately he felt the brunt of joblessness. He described the systematic and structural causes of homelessness as low wages, unemployment, grinding poverty, substance abuse, lack of affordable housing, imprisonment, unforeseen happenings like deaths, accidents, natural calamities, forced migration and gentrification.

The climax of the Play ends up in police rounding up the two characters playing the homeless characters despite the charity organizations trying to help them; an anti-climax!

The above situation seems more severe in developing nations such as Pakistan. The downsizing is an acute problem whether a forced one or in the shape of golden hand shake. Political appointments by successive regimes in organizations such as PIA, Railways, Pakistan Steel Mills, and Nespak etc. have resulted in making these organizations heavy on their exchequer. Labour returning from Gulf have put burden on our already stressed economy. In the Middle East this reviewer has seen labour working day and night, staying in shared accommodation and feeding his family back home. Same was the situation in UK in 1960s when majority of the labour from Mirpur and Gujrat went to work in factories in Birmingham and other industrial cities. Labour would sleep in a mattress with up to 8 men sharing a room. Their sacrifice abroad made lives of their families back home easier. When some returned they either remained jobless or found some of their children spoiled on the money they received from abroad. We are also facing the problems of downsizing or working on lesser wages in our jobs and people like what Safdar has discussed in his 2 Act Play, a literary feat but with a purpose!