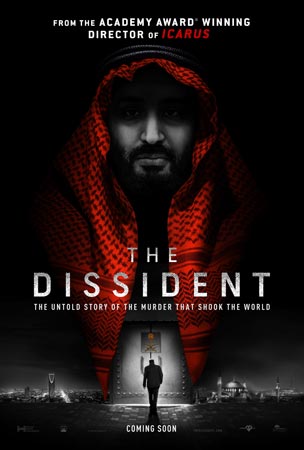 Even before ‘The Dissident’ made its premiere at the Sundance Film Festival, director Bryan Fogel had a sense that his explosive Jamal Khashoggi documentary was going to be a tough sell.

The film, available on-demand this week, was one of the most anticipated of last January’s Sundance. Fogel’s previous film, “Icarus,” about Russian doping in the Olympics, won the Academy Award for best documentary. “The Dissident” features audio recordings of Khashoggi’s murder, the participation of Khashoggi’s fiancé, Hatice Cengiz, and details on Saudi hacking efforts, including the infiltration of the cellphone of Amazon founder Jeff Bezos. The audience at Sundance included Hillary Clinton, Alec Baldwin and Reed Hastings, the Netflix chief executive.

At the screening, Fogel implored media companies not to be scared off

At the screening, Fogel implored media companies not to be scared off. “In my dream of dreams, distributors will stand up to Saudi Arabia,” he said. Riding in an SUV to the film’s Sundance after-party, an upbeat Fogel said he was hopeful that Netflix, Amazon, HBO or others would step forward – anyone that could give the film a global platform for Khashoggi’s story, which plays as a lethal, real-life geopolitical thriller in “The Dissident.”