A spotlight on the political system of Pakistan 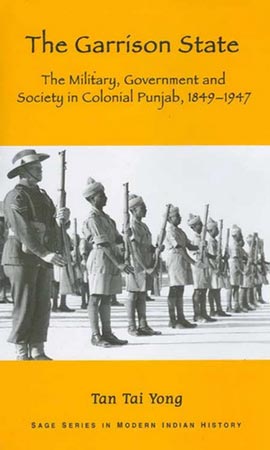 The book Garrison State is written by Tan Tai Yong. This book directly relates to the political system of Pakistan and the role of the military in the context of Punjab. The author has provided the historical reasons to the claim that Punjab was known as the Sword of British Raj, and how this province had played its role for sustaining British Raj and trained the people inhabiting in Punjab for being their shelter in the difficult time and suppressing revolt that occurred in 1857. In the first chapter namely, “A return to arms?Colonial Punjab and the Indian army”, writer tells about, how British used local collaborators for strengthening the colonial rule in their colonies particularly in the sub-continent. Punjab is the prominent example in this regard. British annexed Punjab in 1849 with the help of Bengal Army composed of High caste Brahmans and Hindu Raiputs. After annexing the Punjab?British demilitarized the Army of Ranjeet Singh. But again?they recruited back Sikhs in the army to suppress the revolt of 1857 by Bengal army at Merith. It was a great opportunity for the residents of Punjab to get place in Army. But after this in 1858?for British Army the major problem was the recruitment in Army which they resolved by taking help from collaborators. This occurred owing to their disbelief in Bengal army. So?they wanted to recruit from Punjab who would be loyal to them. By using communal antagonism British balanced Army to avoid futher revolts. In the second chapter “Recruiting in the Punjab?Martial Races and the Military Districts’ ‘writer says that initially till 1880’s British followed the policy of divide and rule for recruitment and they paid heed on that every soldier should be loyal to them. But in 1880’s?their policy of recruitment shifted from divide and rule to Martial races followed certain Books and manuals produced by Government Military headquarter for recruitment. Those books consisted of ethnological and Anthropological studies which told about the martial races that were good in fighting. Following this, they recruited Punjabi Muslims from Salt Range?Sikhs from Maiha Amirsit?Jutt from South-east Punjab and Punjabi Muslims. Most of the people from these martial races joined the Army in order to overcome from economic depression. Furthermore the government offered land and other rewards to those soldiers who stayed loyal to the government. They grant them land for purchasing their loyalty.

In the third chapter, “Garrison province at work: Punjab and the First World War,” the circumstances and situations for recruitment during World War 1 are discussed. This chapter depict how Punjab was used to get warfare advantage and how people were mobilized and compelled to join the Army. In this regard, British government integrated a civil-military mechanism and formed different recruitment boards. Rewards would be given to anyone who joined the Army. This had also attracted people who had massively joined the Army. To mobilize the whole province and to get access in every district of province a series of boards were formed like, central recruitment boards, Punjab recruitment boards and the whole missionary was utilized in order to get massive recruitment. In result more than one and half million people were recruited from Punjab during World War 1. This step of British government had invented civil-military function together and its impacts are easily apparent on our political system. And this step created the rural-military lobby which possessed high influence over the political system.

In chapter four, “Maintaining the Military Districts: Civil-Military Integration & District Soldiers’ Boards,” the scenario of post World War 1 is highlighted by what problems were faced by the soldiers who returned from World War 1. The number of soldiers were made jobless, dealt with poor health issues and it was very difficult for them to have smoothly survived ahead. Along all these factors, the state had to face various nationalist/anti-government movements. To suppress all these movements, district soldier boards were made which were given the task to resolve issues faced by soldiers returned from world War 1. Moreover, these boards proved a helping hand for government because they insisted people to remain loyal to government and avoid every kind of anti-government vibes by saying that their lands would be snatched, pension would be seized and all other rewards would be eliminated if they found indulged in any kind of revolt of anti-government. These district boards also performed the work of surveillance mainly in Military districts in order to keep soldiers loyal. In chapter five” Securing the Reins of power: Politics and Punjab’s’ Rural-military Elites”, the government tried to bless its favourite class with political power by law. In order to meet this, the Act of 1919, was introduced which covered all the interests of this rural-military lobby. In 1919, the seats of Punjab legislature were announced on election basis which were 71 in number and their distribution was rural and urban based in which more seats were given to rural. For elections, the people who had the right to vote were restricted and only the people of certain classes got benefit from these 1919 reforms. And all the retired Military officers were given the right to vote. As a result, the election of 1920, showed that the rural-military lobby secured their majority representation in provincial council and successfully onwards they used to do legislation according to their will.

In the last chapter, “The Garrison State Cracks: Punjab & the Second World War,” the writer has shown how Punjab once again provided soldiers comprising 800,000 which were only given by Tiwana family in the first phase. But after that, we see how different issues like the food crisis and the Sikh refusal to join the military created difficulties for the government. After that, the unionist party too went harsh with the government because it was forming a legislation that was frowned upon by the government. And after the death of Sikandar Hayat Tiwana in 1942, the unionist party became weaker and it favoured the politics of Muslim League because it observed that the making of Pakistan was inevitable, so it was better to be in the side of Muslim League. Thus the unionist party crumbled. Conclusively, the whole book showed the circumstances and development historically made by British government in Punjab. Its consequences we still see in our political system. We see how the British government by antagonizing the natives against natives to strengthen their Raj. They used the resources of the sub-continent and people of the sub-continent to rule over India, as John Lawrence said, feed them, use them and control them.

The writer is based in Ghotki, Sindh and can be reached at kamranmahar247@gmail.com