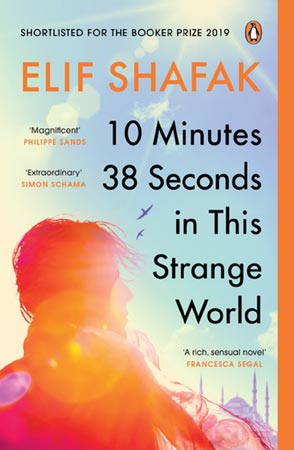 The book 10 Minutes 38 Seconds in this Strange World is a novel written by French-born Turkish writer Elif Shafak. Elif Shafak is one of the bravest and acknowledged authors and feminists in Turkey.

She has authored 11 books and this novel is her 11th one.

The novel is a one-woman story about a sex worker in Istanbul, a depiction of everlasting friendship, unparalleled love, and above all a physiological fiction of the human mind. It also throws a little shadow on the history of Turkey, the state of affairs of sex workers, and the brutality of the state on revolutionists. The author has divided the novel into two parts. The first part narrates the life story of Tequila Leila, who is the lead character of the novel. While the other part mainly focuses on her five friends.

The novel starts from the death of Leila when her heart stops beating and her mind starts thinking. Right after her death, she recalls everything from birth to the end of her life for 10 minutes and 38 seconds. In the very first minutes, she recalls her birthday. She was born to a family of one husband and two wives in the city of Van, Turkey. As her father had two wives, she was given to her stepmother though her real mother, Binnaz, was young and able to take care of her baby. She was named Leyla Afife Kamile by her father Haroun. Her first name Leyla depicts the meaning as dark as night because her eyes were dark, her second name means the pious, honourable as the Haroun’s mother was, the last name shows that Leyla would be modest, respectable, and pure as spring water because not every water is pure. Her father thought, all the mothers in Van will wish for a daughter like Leyla and they will scold their daughters to be like Leyla. He further continued his thoughts that one day Leyla will make him proud. She will be true to her religion, true to her nation, and true to her father. But guess what, Leyla ended to be a prostitute in the street of brothels in Istanbul.

Two minutes after her heart had stopped beating. She recalled her house and her real mother. Their house in Van was so large, her stepmother Suzan, whom she considered as her real mother, had explained to her that the house used to belong to the American doctor and his wife. They had six daughters and all of whom loved to sing. The doctor was so popular who allowed his patients to come to his home and play with instruments and listen to music. Because he had a belief that music can heal even the direst of wounds to the human soul. Later on, that house was given to Haroun’s grandfather as a reward from the Ottoman government for the role he played in the deportation of Armenians in the areas. And with it, she recalled the moment when she was six years old, when Binnaz, her real mother, told her that it was she who gave her birth.

In the third minute, she remembers the taste of cardamom coffee that was associated with the brothel. She also recalls the day when she had been brought to the street of the brothel and a night when the police raided dozens of nightclubs and the drug users in which many sex workers were arrested. And the day when she met Nalan, a third gender, and one of her five friends.

As the fourth-minute starts, she recalls the bitter reality of her life. She remembers the night when she was just six, her forty-three years old uncle slept, and cuddled next to her. At the same moment, she also remembers the Sinan, who was not only her neighbour but her age mate and her loyal friend as well.

Five minutes after her heart had stopped beating, Leila recalled her brother Tarkan’s birthday, who was mongoloid and died at an early age. Meanwhile, she thought about her life when she was sixteen years of age. She had fallen into the habit of following the world news closely and the fashion magazines that she read secretly from her father.

In the sixth minute, she remembers the day when she went to her cousin’s marriage, and the nights when her uncle had visited her privately in her room. She also remembers how her uncle blackmailed her when she tried to keep him away, by saying, it was she who started the affair.

In the seventh minute of her death, as Leila’s brain fought on, she recalled an old issue of Hayat magazine that she secretly borrowed from Sinan. She had seen a blonde woman clad in a black swimsuit in it. She also remembered the awful and painful day when the whole family knew about her pregnancy, the two months after she told the mother and aunty wearily and brokenly that she had started bleeding, and they recognized her miscarriage. Moreover, she also recalls the day in a hospital when she met Jameelah, one of her five friends.

In the eighth minute, Leila recalls the memory of a man, who came to the brothel, it was the man all the prostitutes tried to avoid. Cruel, mean, and foul-mouthed, he had been violent a couple of times but this time he was sent to Leila’s room. In the room, the man tried to pour the Sulphuric Acid on her face but luckily it hit her in the back, and she escaped. She also remembers the days in the brothel, when there was only one woman, Zainab122, with whom Laila used to spend most of her free time. Zaynab122, one of her friends, so short about 122 centimetres, and the number 122 in her name was a reference to her height.

Nine minutes had gone by, and the next memory that Leila pulled from her archive was the D/Ali. Even though his real name was Ali but in the school, his classmates used to call him Dali instead of Ali therefore he became D/ Ali for the whole life. He came once in the brothel and met Laila, and then he started to come again and again but never wanted to touch her. He just wanted to spend the time with her.

In the tenth minute, Leila’s memory slowed down. But, her mind happily recollected the taste of the street foods that she used to eat in Istanbul. She also remembered the world’s fourth longest bridge, the Bosporus bridge, Turkey. And, then she thinks about Humeyra, one of her five friends.

In the remaining thirty-eight seconds she felt herself wearing a bridal gown. She remembered the three-tiered wedding cake. Undoubtedly, it was her wedding day. She got married to D/Ali. After the marriage, she left the brothel and ranted a flat with her husband. D/Ali was a communist and used to go in Marches of evaluation. Once they both, Leila and D/Ali went to attend a march, there was a huge, and massive crowd of people. Every few minutes D/Ali was checking that how Laila is doing in the march. He never let go of her hand. But suddenly, Leila heard the sound of series of rattles from all sides and felt that now her hand was not in D/Ali’s hand, he was lost in-crowd, he left her hand, and never came back, he was shot dead. And just before her brain surrendered, she saw her five friends, Sabotage Sinan, Nostalgia Nalan, Jameelah, Zaynab122, and hollowed Humeyra together celebrating her birthday. She had often thought that she is lucky and blessed having five sincere and loyal friends.

In the second part of the novel, Elif gives an account of how Laila’s friends struggled to take out her body from a grave in Cemetery of Companionless and threw her body in the ocean. One night after a good time since D/Ali’s death, she goes to a sex client. As she marches back to her apartment from the client, she meets with another client in the street and gets into his Lamborghini, who later shots her dead. Police take her body in custody and calls her parents in Vain to take her body. But, they refuse to accept her as their daughter. Her five friends try to take her body from the police to give her a good burial. But, police reject their plea because friends are not relatives and bury her body in the cemetery of companionless, where most of the ownerless dead bodies are buried. But here, Laila’s friends didn’t lose hope, they all get into the cemetery to take out their dear friend’s body from the grave. Going away from the eyes of the police, they manage to take out her body and threw it in the ocean, as per Laila’s wish to be thrown in the ocean after her death. And with it, the novel reaches its end.

The novel enlightens the idea of science that how a human mind starts working after death. Even though the human body is in rest and the heart stops beating but the brain still works. It’s also a masterpiece on greedless friendship. Take this novel in your hands and you will not cease to finish it.

The writer is a blogger and student at University of Engineering & Technology. He can be reached at
jahanzaib.writer@gmail.com