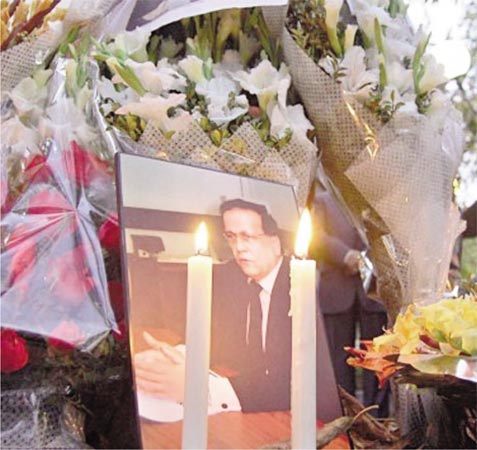 It was a bright sunny day but otherwise a dismal hour on January 4, 2011 when we were shocked by the most tragic news of cold bloodied, broad-day light murder of otherwise popular Governor of Punjab Salman Taseer. It was, indeed, one of the darkest days of our times when one of our brightest political leaders ever produced by Punjab, was horrendously assassinated by his own security guard. He was under constant threat of death at the hands of the bigoted killers out there to hunt him for his dare as of one of its most bright, brilliant and secular leaders of an age when the country was being overtaken by forces of bigotry. As usual he was on a carefree private visit to Islamabad doing the rounds in the book shops despite the fact he had known the extremists opposed to his leader martyred Benazir Bhutto—were also after him not knowing that he was walking with his enemy.

It was just a few days before his murder I met him in London when he walked in my office casually as ever. I protested over his bravado when threats to him were mounting. As Governor he was under rules of business to have adequate protocol that of course included bullet proof automobile for his transport, a security guard and normal care. Being younger to me and having known him for over 30 years, I could chide him like an elder to task for his swashbuckling style. I asked him as to why did he not ask for the embassy car. He pulled out London Transport’s Day Pass and said ‘Wajid Bhai, why bother you, when I have London’s whole transport in my pocket. It is much easier to move than a car.’

Salman’s death was a severe blow to Pakistani politics and especially Pakistan People’s Party’s soon after the dastardly assassination of PPP Chairperson martyred Benazir Bhutto. The vacuum caused by his sad demise was a severe jolt for the Pakistani nation. There was no doubt that he was bravest of the brave hearts –a great man who dared to speak out in defence of blasphemy victim—Aasia Bibi— rotting in jail for years for want of justice from a anorchous judiciary that could not dare defend the rights of the people including minorities. Salmaan was totally committed to the high democratic ideals and the secular vision of Quaid-e-Azam Mohammad Ali Jinnah, Shaheed Zulfikar Ali Bhutto and martyred Benazir Bhutto. Had he not been committed to justice and fair play to minorities he would have had no business to visit Aasia Bibi in her Punjab police dungeon to assure her that soon she would be given amnesty by the President.

Martyred Salmaan was held in highest esteem by the people who respected his boldness to proclaim loud and clear that he believed in liberal and secular politics. He was targeted for elimination for having defended the rights of minorities against the black and discriminatory laws introduced by Dictator General ZiaulHaq to terrorise the people into submission to his totalitarian rule.

I have had the pleasure of knowing him closely for 30 years as an unflinching fighter for democracy. My hair raise at their ends whenever I recall how brutally he was tortured by Punjab police under orders of Mian Nawaz Sharif when skin peeling rollers were run over his thighs for supporting martyr Benazir Bhutto’s long march. His sacrifice in blood — at the critical juncture when Pakistan was carrying on a battle to do or die to defend MAJ’s ideological moorings seeking equal treatment to all its citizens irrespective of caste, creed, colour or gender, to save the county from becoming a victim to extremism. Indeed, his love for humanity carved for him a permanent niche in the hall of fame of those great leaders who preferred death to surrendering to the obscurantist forces immortalising in history.

Author is former High Commissioner of Pakistan to UK and a veteran journalist.