A Tapestry of Medicine and Life 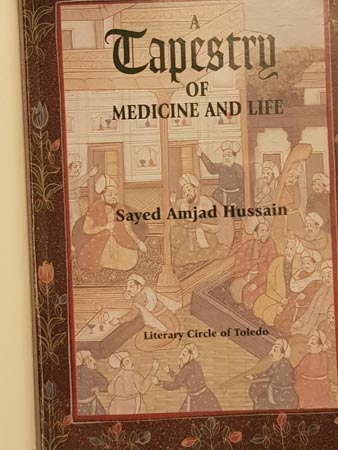 In the essay in this book captioned, ‘Murder most Foul’ one finds a heartrending story of a magnificent 2000 year old Peepal tree, of nearly 10-12 feet girth, located in Peshawar city, mentioned in 600 BC in his travelogue by the Chinese Buddhist pilgrim Hiuen Tsang, where Kanishka set up six huge Buddha statues, mindlessly chopped down during the 1970s in order to make space for shops. Not a ‘single peep of protest’ was raised.Reading this anguished story one would surmise its author to be a driven ecologist fired by a passion to preserve humanity’s rich past to inform and exalt it’s present. But one is struck to discover that the ardent conservationist and tree-hugger is no other than Dr. Syed Amjad Hussain, a Peshawari-Pakistani Professor Emeritus both of Cardio-Vascular Surgery as well as of Humanities in the University of Toledo, Ohio, USA. This is his latest book, ‘ A Tapestry of Medicine and Life’,consisting of sixty eight essays.

It is a veritable and pleasant tour de force, covering snippets and snapshots from the panorama of a full and rich life, from childhood through education upto becoming a leading, world renowned cardio-thoracic surgeon; and on the way becoming part of a loving family, pursuing varied interests and enthusiasms of exploration, history, arts and literature. One can find faint resonances of the great English literary essayists in this work.

The author gels into himself, reflected in copious measure in the book, a unique symbiosis, of all that is worthy in two different cultures; the eastern, or more specifically, the Indo-Pak-Iranian-Pakhtoon and the occidental, with respect and deep esteem for their various strands, which in the ultimate analysis, boil down to a grand coalescence, grounded in humanity and shared values of love, compassion, gentleness and pursuit of truth and virtue. ‘Callum non animus mutant qui trans mare curran (They change their sky, not their soul, who rush across the sea.) (Horace)

But the book is far from a sentimental grovelling in the nooks and corners of the past; rather a resuscitation from times and experiences of a bygone time, of an enrichment of the present, and with a chin held high up in the life giving bracing winds of the remaining future, evincing a never ending passion for a fulfilled and enriched life, that in the home run, one can proudly look upon with deserving and well earned satisfaction.

In the book one is struck by the rather rare, but elevating and fulfilling bringing together , so often found in rarity among both the persons of humanities as well as those taking to the sciences, of the ennobling spectacle of the arts and sciences, of technique and beauty of philosophy and literature, complimenting and in certain ways making up for , perhaps, the deficiencies of either, in allowing for a holistic and complete appreciation of human achievements and excellences in terms of contributions to various civilizations and cultures. Describing performing a heart surgery, the author conceives his work as that of a music conductor marshalling a Beethoven 5th with the team of anaesthologist, scrub nurses and other staff of the OT representing members of the orchestra.

If ever there was a case to be made out for bringing to an end, or sharply reducing, the unfortunate tribalization and short-sighted bigotry current among nations and between countries; to remove it of various prejudices and phobias prevalent in the world, of a need to collaboratively banish the banes of dehumanizing poverty , pelf and disease and ignorance, examples such as those present so valuably and pristinely reflected in the author, who takes ,in a tolerant manner, to various perceptions and beliefs, to two different zeitgeists, can be a beacon light for bringing a change for the better.

In a torn and divided world, whereas today the west , as well as Japan and China , have the science and resources to rid the underprivileged of underdevelopment and crushing indebtedness, undoubtedly, mostly of their own making; in a world riven by prejudices and intolerances people like Dr. Amjad Hussain can play a unique bridge building role.

The stories narrated start in Bhakar, in some similarity to the pattern and temper of the river Indus emanating from Senge Khobe in the highlands of Tibet, to the source of which the author travelled, besides traversing its whole length up to its estuary in the Arabian Sea. They share in their relatively simple and staid beginnings, then like Indus turning to tremulous and thunderous passage through the Hunza gorge, their were sudden changes of routes as the Chilas bend. On the way other tributaries joined to make life more enriching and fuller, like marrying his life partner and your bringing up three lovely children; there were twists and turns, ups and downs, the successes and setbacks, joys interspersed with sorrows, professional, emotional and interpersonal; but like the impressive river the author’s life, metaphorically, entered in serene grandeur it’s deltaic stage contemporaneous with advanced age.

Somerset Maugham likens life to a panoply or in the author’s words, a tapestry, made up of various unknowns and a few certainties.One of the predicaments of life is its unpredictability, of forces governing one’s fate and destiny beyond one’s apparent comprehension and thus control.Life seems to be less an orderly logarithm or seven constants of quantum physics about the universe and more like a game of chance and abundant and pervasive world misery and pain.That is one reason that has put to question matters such as the purpose of life, free will, determinism etc..Be that as it may, Maugham , having lived a rich and fulfilling life, says when he tries to cast a look back at his life, he is hard pressed to assert that much of what he did or achieved was by virtue of his design or pre planning. Rather, life in all its variety and unknowns, its moments of happinesses and relative sorrows, in the end consummates like the glorious pattern, made by an unknown hand, on a Kirman sickle leaf scroll Persian carpet or the paintings on Sistine Chappel. So would the author perhaps sum up his life.

In the end I want to quote a passage from Will Durant’s ‘ The Falling Leaves’ which perhaps may best explain and be taken as a comment on the author’s life and travails:

‘ Three thousand years ago a man thought that man may fly ,and so built himself wings, and Icarus ,his son ,trusting them and trying to fly, fell into the sea. Undaunted, life carried on his dream.Three generations passed and Leonardo da Vinci scratched across his drawings plans and calculations for a flying machine and left in his notes a little phrase, that once heard, rings like a bell in the memory , ” There shall be wings.” Leonardo failed and died, but life carried on the dream; generations passed and men said flying was against the will of God.And then man flew, and the age long challenge of the bird was answered. Life is that which can hold in a purpose for three thousand years and never yield. The individual fails, but life succeeds. The individual dies, but life, tireless and undiscouragable, goes on, wondering, longing, trying, mounting and longing.’

The past is a part of man’s existential and living self. Intezar Hussain in his inimitable novel, ‘Basti’ , speaks of the ceaseless spirituality and relevance and pervasiveness of the past in man’s life in these words, “…even when cities are left behind, they don’t stay behind. They seize you even more. When the earth slips from under your feet, that’s when it really surrounds you”. ‘Tapestries…’ has an unmistakable message and flavour in similar contours and colours.