The Reconstruction of Religious Thought in Islam is monumental 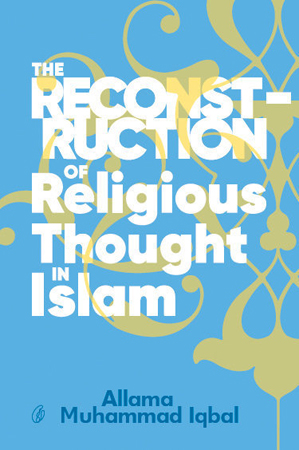 Dr Allama Iqbal’s The Reconstruction of Religious Thought in Islam is one of the seminal and monumental works in the history of Eastern and Western philosophy.

As for as the title is concerned, it expresses very thought of a book that reconstruct Islamic teachings with modern times. Those scholarly lectures were delivered at Madras, Hyderabad and Aligarh. They are ultimately considered as counter-arguments to whites who claim the finality of their ideas. The book contains seven chapters; first four chapters set tone for thesis, fifth and sixth parts present anti-thesis and last segment of the book is a synthesis.

Allama sahib left no stone unturned to justify the utmost importance of religion in individual’s life. Therefore, first chapter-Knowledge and Religious Experience-sets tone for thesis and opens up long discussion on religion, faith and Creator’s relation with creature. He states;

“Religion is not a departmental affair; it is neither mere thought, nor mere feeling, nor mere action; it is an expression of the whole man.” P.g5

Besides, he becomes a little hard upon Ghazali and Kant- they failed to see the thought beyond its own finitude- it realizes readers over the rational approach of a writer. According to him, Ghazali was under the influence of Aristotle, he claims;

“Ghazali remained on the whole a follower of Aristotle in Logic. In his Qistas he puts some of the Quranic arguments in the form of Aristotelian figures” p.g142

Additionally, Dr. Allama Iqbal experienced both elements of knowledge; wisdom of heart and wisdom of intellect therefore he refuted Freudian concepts by saying that they are not interpretations of those data of experience which are the subject of sciences of Nature. Aforementioned aspect is not only presented with strong argument but also undeniably asserted; “The Prophet of Islam was the first critical observer of psychic phenomena” p.g21

In second chapter- The Philosophical Test of the Revelations of Religious Experience- idealistic, realistic, scientific and religious approaches are eloquently inscribed. Allama sahib describes science in a nutshell that scientific perspective cannot comprehend life. He points out the most notable theories which were later on disproved by other scholars. For instance, the theory of a matter refuted by Berkeley, in his exact words ‘unknown cause of our sensations’, Einstein rejected Newtonian concept of an absolute space. He is much clear in his stance that space is real but relative to observer. Allama sahib himself affirms Einstein’s idea by believing that the ultimate character of reality is spiritual.

Third chapter- The Conception of God and the Meaning of Prayer- is like previous chapters where time, space and Oneness beautifully illustrated. In this part, mystical point of view seems more dominant over scientific observations. Because in next chapter, he firmly believes that ego is not bad rather it is a transcendent experience where he mentions a plethora of names who were the staunch supporters of truth. Hallaj’s ‘I am the creative Truth’, Napoleon’s ‘I am a thing, not a person’, Prophet Muhammad’s ‘I am Time’ Hazrat Ali’s ‘I am the speaking Quran’, Ba Yazid’s ‘Glory to me’ Kant’s ‘I Think.’ This experience is clearly speculated in chapter five where the difference between Prophet and mystic being cognitively penned down.

Fifth chapter -Spirit of Muslim Culture- is an antithesis of a book. Allama sahib quoted forefathers of Muslim history who did a brilliant job in their times from whom European thought received inspiration and it can be gauged from the following substantial instances;

1. Ibn Khaldun was the only Muslim who approached Sufism in a thoroughly scientific spirit p.g141

2. Nazzam who first formulated the principle of doubt as the beginning of all knowledge p.g142

3. Ishraqi and Ibn Taimmiyya who undertook a systematic refutation of Greek Logic.

4. Abu Bakar Razi was the first to criticize Aristotle’s first figure, and in our own times his objection, conceived in a thoroughly inductive spirit, has been reformulated by J.S Mill.

5. It is misunderstood that experimental method is a European discovery; Roger Bacon received his scientific training from Muslim universities of Spain. Indeed, part V of his ‘Opus Majus’ which is devoted to ‘perspective’ is practically a copy of Ibn Haitham’ “Optics.” Europe has been rather slow to recognize the Islamic origin of her scientific method.

In a way, it plays vital role for developing critical and constructive thinking among students. This segment of a book must have to be the course and thesis work of institutions especially to be the part of post-colonial studies, students will come to know their basic roots and fundamentals. They will reconstruct their religious and academic thoughts.

‘The Principle of Movement in the Structure of Islam’ this part throws further light on an unacademic criticism of European writers. For instance, in a book ‘Mohammedan Theories of Finance’ published by the Columbia University. The author of this book says, without citing any authority that according to some Hanafi and Mutazilla writers the Ijma can repeal the Quran. P.g191

So, the statement is clearly seemed futile and helter-skelter rather a misleading assertion.

“The idealism of Europe never became a living factor in her life, and the result is a perverted ego…Believe me, Europe today is the greatest hindrance in the way of man’s ethical advancement.” p.g196

The last chapter ‘Is Religion Possible’ is a synthesis of an entire text. Time and space were the primal and focused arguments in first four chapters which are synthesized with a mystical statement;

“The great Muslim Sufi philosopher, Muhyaddin Ibn al-‘Arabi of Spain, has made the acute observation that God is a percept; the world is a concept. Another Muslim Sufi thinker and poet, ‘Iraqi, insists on the plurality of space-orders and time-orders and speaks of a Divine Time and a Divine Space. It may be that what we call the external world is only an intellectual construction, and that there are other levels of human experience capable of being systematized by other orders of space and time – levels in which concept and analysis do not play the same role as they do in the case of our normal experience.” Pg200

Additionally, there are biased remarks which are scholarly refuted;

“George Fox may be a neurotic; but who can deny his purifying power in England’s religious life of his day? Muhammad, we are told, was a psychopath. Well, if a psychopath has the power to give a fresh direction to the course of human history, it is a point of the highest psychological interest to search his original experience which has turned slaves into leaders of men, and has inspired the conduct and shaped the career of whole races of mankind.” Pg207 To be concluded, the text has left its tremendous impacts on Muslim and European world as well. After going through almost all subjects Allama sahib comes to know the ultimate truth lies in spiritualism which cannot be camouflaged under intellect-oriented studies. Undoubtedly, it is one of the complex and complicated books therefore it is not explored in a way that it should be.

The writer is a blogger and former student at National University of Modern Languages, Islamabad. He can be reached at mangriogul@gmail.com