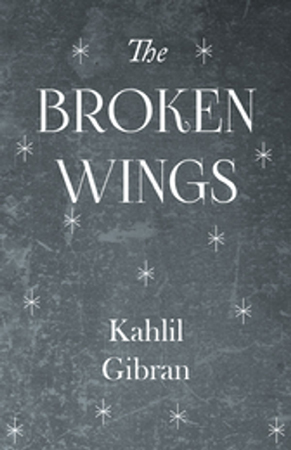 No one can deny the fact that it is often hard or rather impossible to forget one’s first love. Though man’s feelings keep changing from time to time in accordance with their social milieu, forgetting someone you were attracted to for the first time is very difficult. It leaves an indelible impact on one’s life; it seems nigh impossible to escape the recollection of the first love at first sight. It is another thing whether one is successful in it and ends up achieving their desired commodity i.e their beloved. Perhaps, it was the same case which Kahlil Gibran lived through and was compelled by, to voice his love story in the form of a novella: The broken wings. Kahlil Gibran was a Lebanese-American painter, philosopher and writer, known the world over for his genius in respective fields.

The Broken Wings is Gibran’s masterpiece after his philosophical work, The Prophet. Kahlil Gibran wrote it in 1912, the time when he was completely drowned by the ocean of fond memories of his first love. He relates it in his book: “I was eighteen years of age when love opened my eyes with its magic rays and touched my spirit for the first time with its fiery fingers”.

The novella has been set in Lebanon and is a tragic story of love of a woman, Selma Keramy with Gibran. Selma, whose mother had died while giving birth to her, is the only daughter of Farris Effandi. Farris was a rich man and one of Gibran’s father’s friends. Gibran visits him at his home in the Spring where he falls in love with Selma. They meet frequently and Selma also reciprocates his love. Shortly afterwards, Selma unfortunately, becomes a victim to her father’s wealth. It is shown that just when she falls in love, her marriage is arranged with Mansoor Bay Galib, a local Bishop’s nephew. Even though she is not content, she feels it wrong to turn down the proposal only because of the fact that she lives in an orthodox society. And even if she did so, it would not be possible for her and for her father to continue living there, as her hand has been asked by the Bishop for his nephew. She is subjected to injustice by the priest just because of her father’s pelf and is married to Mansoor, Bishop’s nephew who is insolvent, corrupt and greedy. A few months after her marriage, Selma’s father dies and after his death his whole wealth officially passes on to his son-in-law, Mansoor Bay Galib. Thus it is a story of love which at its very birth is strangled to death by a rapacious clergyman. A love which is choked of life before it sighs.

The novella reveals the inequalities and injustices of the religious people who in the name of spiritual guidance and salvation rob people of their lives. Gibran writes: “The heads of religion in the east are not satisfied with their own munificence, but they must strive to make all members of their families superiors and oppressors. The glory of a prince goes to his eldest son by inheritance, but the exaltation of a religious head is contagious among his brothers and nephews. Thus the Christian bishop and the Moslem Imam and the Brahman priest become like sea reptiles who clutch their prey with many tentacles and suck their blood with numerous mouths”.

Gibran has tried to bring to light the de facto monarchy of religious men who in the name of solace bring suffering on their followers. Besides, Gibran, in the book, has beautifully but tragically depicted the norms and conditions to which woman is subjected in Oriental society. He shows the plight and misery of the woman. Woman cannot marry a man of her choice nor even can let her parents or male guardians know of her love. Woman in orthodox society is not a human being. She has not the audacity to deny the proposal of marriage arranged by their parents. She is just a form of commodity to be used by man. It is realistically shown how woman is conditioned in the society. The novella concludes on a tragic and heart-breaking note. Its language is simple and the book is penetrable from its very outset. It is easy to follow as it has no complicated characters. The language is poetic in form. To sum it up, it makes for a fascinating reading. Everyone looking for a great novella must go for it.