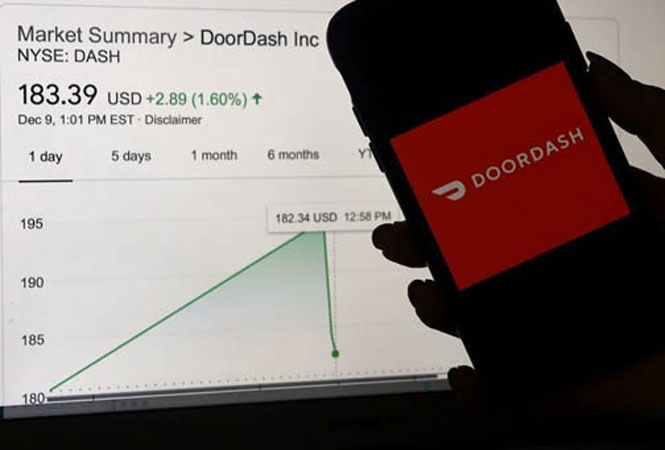 Airbnb shares more than doubled in a sizzling US market debut Thursday which vaulted the home-sharing platform into an elite group of richly valued companies.

Shares opened at $146, a dizzying rise after the San Francisco-based firm priced them at $68 for its initial public offering.

They closed at $144.71, a jump of 113 percent in the market debut. At those levels Airbnb is worth more than $100 billion, including options and restricted shares, up from the bumped-up $47 billion at the IPO price. That puts the 13-year-old company on par with major global firms such as IBM, 3M Corp and American Express, for example.

Airbnb raised some $3.4 billion in the offering amid a feverish rush for new shares in companies adapting to lifestyle changes imposed by the coronavirus pandemic. The company listed on the Nasdaq stock exchange under the ticker symbol “ABNB.” Gregori Volokhine, portfolio manager at Meeschaert Financial Services, said interest in Airbnb was high because “investors have the impression that this is the birth of a new platform, a company that can completely disrupt the world of tourism.”

The Airbnb debut comes just a day after meal delivery group DoorDash’s spectacular Wall Street entry with a jump of 75 percent in its first day of trading.

DoorDash made its debut with a lofty $39 billion valuation, on the heels of IPOs from others in the tech sector and on-demand economy which point to frenzied demand for the stocks.

Airbnb has said its home-sharing model proved resilient during the global pandemic, as it posted a profit of $219 million for the just-ended quarter.

The 13-year-old company, valued at $31 billion in its latest private funding round, is confident it will thrive over time. “We believe that as the world recovers from this pandemic, Airbnb will be a vital source of economic empowerment for millions of people,” it said in its IPO filing.

Airbnb recently implemented new safety protocols for many of its hosts and maintains that listings meeting its upgraded guidelines are safer than hotels during the pandemic.

The platform now has more than four million listings in countries around the world and has served more than 825 million bookings.

New Constructs research firm said Airbnb “has a plausible path to profitability and growth” if it can contain costs while expanding its global footprint. Airbnb and DoorDash stock market debuts this week are part of a “unicorn parade” capping a busy year for hot startups going public. Unicorn startups — valued in the billions — are poised to take advantage of a market hungry for young businesses promising fast growth, with some capitalizing on lifestyle changes due to the coronavirus pandemic.