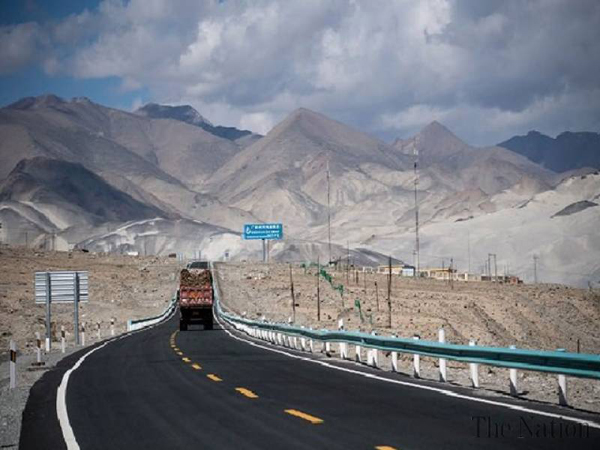 The name Gwadar is a combination of two Balochi words Gwat (meaning the wind) and Dar (meaning Gateway) thus Gwadar means “The gateway of wind”. It is thought to be derived from “Gedrosia” which the ancient name was given by the Greeks to the semi arid strip of land of Balochistan province consisting of three mountain ranges Makran Coastal, Central Makran and Siahan Ranges. The landmass of Gwadar is a hammerhead-shaped peninsula protruding into the Arabian Sea along the western coastline of Pakistan in Balochistan province. It is situated at the apex of the Arabian Sea and at the mouth of the Persian Gulf, approximately 630 km west of Karachi, 75 km East of Pakistan’s border with Iran and 380 km (240 mi) km northeast of the port of Muscat, Oman off the strategic Ras al Hadd strait across the Arabian Sea. It is a natural and strategic location for a warm-water, deep-sea port.

The Muslim Arab army under Muhammad bin Qasim captured the town of Gwadar in 711 AD. In the following centuries the area was contested between various Iranian and Indian based powers. In 1783 the Khan of Kalat granted Gwadar to Taimur Sultan, the defeated ruler of Muscat. When Taimur recaptured Muscat, he continued to rule Gwadar by appointing a wali or governor. Gwadar fort was built during Omani rule, whilst telegraph lines were extended into Gwadar by the British. When Pakistan gained independence in 1947, Gwadar was still under Omani rule. With the independence of Pakistan and accession of various Baloch states in Pakistan, including the Chief Commissioner’s Province of British Balochistan on 15 August 1947 the States of Kharan, Makran and Lasbela acceded to Pakistan on 17 March 1948; and the Kalat State on 27 March 1948. The residents of Gwadar began raising the demand to join Pakistan which prompted Pakistan to make a formal request to the Sultan of Muscat and Oman, Said bin Taimur, for the transfer of Gwadar territory (about 2400 sq Miles area) to Pakistan. After four years of deliberations, Mr Feroz Khan Noon the seventh prime minister of Pakistan announced that the British Parliament had agreed to the transfer. Incidentally it was the wife of Prime Minister, Viqar ul Nisa Noon who was very instrumental and worked hard in London in 1956 to get British PM and parliament’s approval for the British colony Oman to give custody of Gwadar to Pakistan. Pakistan purchased the Gwadar enclave from the Sultanate of Muscat and Oman for USD $3 million. Gwadar formally became part of Pakistan on 08 December 1958. His Excellency Aga Khan III paid the amount and gifted Gwadar to Pakistan and it was made part of Balochistan province.

Once the modalities for the transfer had been settled between Oman and Pakistan, the Government of Pakistan assigned the task of conducting the official ceremony under the direct control of Vice Admiral H M S Choduri then Commander in Chief of the Navy. The activity code name ‘Operation BRAVO’ was assigned to the ceremony. The Principal Secretary to the Prime Minister Mr Agha Abdul Hamid arrived Gwadar onboard SS Sirdhana on 08 September 1958 from Karachi accompanied by a contingent of Pakistan Navy communication unit. The SS Sirdhana a passenger cum cargo ship owned by the British, operated a fortnightly service between Karachi, Bahrain and Muscat, stopping en-route at Gwadar to pick/ drop materials and men while at anchor. On arrival the navy unit established communication with PNS BABUR anchored in Gwadar Bay.

The handing/ taking over ceremony took place outside the office of local political agent. PNS BABUR paraded a Guard of honor commanded by then Lt Iftikhar A Shirohey and Wali of Gwadar on behalf of the Sultan of Muscat handed over Gwadar territory papers to Pakistan Government’s representative and Pakistan flag was raised outside the political agent’s office. PNS BABUR fired a 21 gun salute to welcome the territory as of part of West Pakistan. Pakistan government integrated Gwadar in the Balochistan as District headquarters of the newly formed Gwadar District, which effectively coordinates all matters related to the area.

To make better use of its operational assets, Admiral K R Niazi CNS in the early eighties realized the importance of development of coastal region. A critical requirement in this regard was the PN’s ability to maintain naval presence ashore on a sustained basis along the coast, west of Cape Monze. First ever Naval camp at Gwadar, was established in 1983 in randomly pitched tents on top of the Ras Nuh (Jabl-e-Nuh) cliff. In 1979, it was decided to construct a temporary jetty on the coast at a location most operationally and strategically advantageous to the Naval operations. The hydrographic survey vessel PSN ZULIFIQUR (F-265) visited the possible locations along the Makran coast at which depth of water, wind and tide condition most suited to a site in the Gwadar East Bay (Demi Zirr) was proposed as it not only met all hydrographic requirement of a safe berth but the hinterland were ideal for connecting up with road communication. Due to absence of any infrastructure or roads, naval ships were used for transportation of building material for the contruction of first ever jetty at Gwadar. The jetty was constructed with assistance and technical support of Frontier Works end September 1979.

In early 1979, Pakistan Navy decided to introduce ‘HAMMERHEAD and SEASPARK series of exercises. This decision gave a lot of impetus and contributed significantly to the expeditious development of shore-based facilities along the Makran Coast as jump off bases for units of the naval air arm and the patrol craft squadron. The first SEASPARK exercise in November 1979, proved the utility and role of Gwadar as a forward operating base. In July 1982, approval of the Govt. was obtained to commission the first shore establishment of Pakistan Navy on the Makran Coast. Thereon, all required preparations for the commissioning of base as first independent Coastal Establishment on Makran coast was started as a ‘forwarding operating base’ and be assigned to host Pakistan Navy fleet visiting the forward base.

The timely and sequential achievement of success for developing of first establishment, the officers and men worked very hard till commissioning of PNS AKRAM on 31 July 1987. Officers and men left no stone unturned to prepare for the landmark occasion. The support of Coast Guard detachment in Gwadar and representatives / leaders of the BSF (Baluchistan Student Federation) came in very handy in the overall development of first ever naval base at Gwadar. On the commissioning day of PNS AKRAM CNS hoisted Pakistani flag and PN Jack flag followed by unveiling of the commissioning plaque. The DC Gwadar and Baloch representatives were also present at the commissioning ceremony.

In today’s environment, Gwadar port ideal location at the mouth of gulf and opposite strategic choke points of Strait of Hormuz and Gulf of Oman. The port is visualized as regional hub serving commercial traffic of Middle East and Gulf countries. The start of commercial activities at port of Gwadar in the recent years will supplement Karachi Port and Port Qasim. It will attract transit and trans-shipment trade from many countries. The indirect non quantifiable benefits which the people of region will get and would accrue to the national economy from this port. By making Gwadar the pivot of regional trade, Pakistan will also attract considerable investment into Balochistan. Apart, the war stamina depends on the availability of POL to armed forces for effective fighting. Therefore, keeping in mind the importance of SLOCs for provision of uninterrupted oil supply, Gwadar port would provide much-needed alternate for Karachi/ Qasim ports.