* Naseer Ahmad Nasir, a poet of international repute has done a wonderful job by compiling editorials of all the issues of his literary magazine ‘Tasteer’ since its inception many years ago in the form of the book ‘Tanqeed Kei Naye Tanazur’ published in the year 2020 dedicated to Dr Iqbal Afaqi 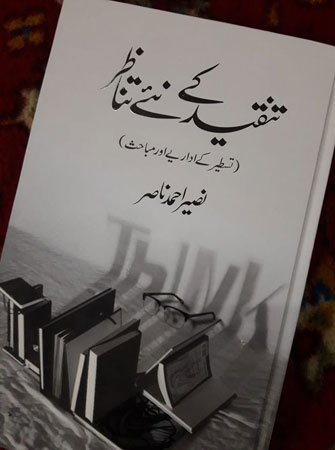 General perception of any literary magazine is that it offers the latest literary endeavours to the literature lovers but at the hind side it educates the new generation and provides guidance about the contemporary literary trends.

It also provides a forum for discussions/debates on the new trends in literature. This tough calibration is a test of the standard and quality of any magazine’s editor in the absence of which his role is limited to that of a post office. Naseer Ahmad Nasir, a poet of international repute has done a wonderful job by compiling editorials of all the issues of his literary magazine ‘Tasteer’ since its inception many years ago in the form of the book ‘Tanqeed Kei Naye Tanazur’ published in the year 2020 dedicated to Dr. Iqbal Afaqi. The reason was that in each editorial, a burning issue was taken up by the editor that invited comments and discussions which were published in the issues that followed.

Naseer’s topic for discussion and raising questions comprised impact of post modernism, history, background of prose poem, impact of technology, science, gaps in the diction in Urdu criticism, material available and boundaries, nature, literature and comparative literature etc. For instance the creative reason for acceptance of prose poem as quoted by the editor is with reference to what Ruth Wildess, editor of American magazine ‘Prophetic Voices’ has to say about it. She says “One of the most prevalent remarks that we find editors scrawling across our poems these days is ‘this is not poetry’. And what is poetry? Rhyme? A certain beat? A certain ampunt of syllabus? They had forgotten that what we call traditional poetry was at some earlier point. A new form, whereas the prose poem that tells a story dates back to biblical times. Examples being the story of Ruth and Naomi, Samson and Delilah and David and Goliath. Of course these were long poems, whereas today the short prose poem is the most common form used.” Many sent their views to the Editor of ‘Tasteer’ that enticed the editor to compile the reaction of many writers and intellectuals across the globe in four sections/chapters. I shall just mention the concluding remarks by Dr. Saeed Arifi from India that says that we just want to follow the already treaded path for our ease. Neither do we allow poets and writers to create something new nor do we create something new ourselves. Despite this attitude the irate ones do find a way to fulfill their desires. ‘Nasar Nazm’ poets are doing the same.

The next topic taken up in the editorials of ‘Tasteer’ is ‘Urdu Tanqeed Kei Istalahati Shigaaf’ – July/August 1999 issue. The editorial comments that much is being written on topics such as structuralism, post structuralism, modernism and post-modernism but less impact or discussions are seen about their practical implications. Not much is taught in the courses in our universities about the meanings of the new taxonomy. This situation is just opposite to that in the West. Many intellectuals responded to this query of the editor including Dr. Wazir Agha, Ghulam Jillani Asghar, Satyapal Anand, Nasir Abbas Nayyar, Professor Riaz Siddiqui, Jillani Kamran, Dr. Salim Akhtar and alike. Dr. Wazir Agha advocated the impact of theory verses practical. In fact its temperament is communal that includes philosophy, Marxism, linguist, nature etc. after which this theory comes into being. After gaps new philosophies take birth. So theory must not be taken as one school of thought in criticism. Dr. Saleem Akhtar says that most of the teachers are familiar with English language up to BA level. They do not even bother to acquire proficiency in language to make access to the latest foreign literature. The trend is to concentrate research on classic poets. Criticism is limited to class notes ending up the students just getting 33 percent passing marks.

Another very interesting issue taken up by the editor in the editorials of ‘Tasteer’ in the April-September 2001 issue is about the importance of science and technology in poetry. The editor contends that instead of making the foundations stronger by use of technology, we just concentrate on changing the superstructure. In the developed nations it is used as a necessity whereas in the developing nation like ours, it is taken as fashion or status symbol. Dr. Salim Akhtar responded that unfortunately poetry has been considered as means of entertainment. It was Sir Syed Ahmad Khan and Maulana Haali who made poetry to expose the prevalent state of affairs. Khwaja Dil Muhammad came out with couplets such as ‘Uth Baandh Kamar Kaya Darta Hei/Phir Daikh Khuda Kaya Karta Hei’ (God shall be with you if you make yourself ready to face the odds). It was Allama Iqbal who made literature subservient to the cause even before the progressive writers did.

In the recent past Dr. Saeed Akhtar Durrani (now late), a scientist of fame who worked in the Physics Department, University of Birmingham, UK used science while saying poetry. From the poetry of Durrani and as expected from his poetic background, the impressions of the style of the ‘Asaatazas’ are witnessed in abundance. Regarding the contents of Durrani’s poetry the old and new thoughts are clearly reflected proving that Durrani’s has an inquisitive mind exploring the new horizons and at the same time keeping the old diction and tradition intact. The effect of his scientific approach, which believes in the exactitude or precision as compared to the ambiguities often reflected in poetry, is minimal. Durrani himself while referring to Dr Wazir Agha’s comments on his poetry states that he has by choice deterred himself from the poetry with scientific approach and has distinguished the physics from ‘Ma’abd-physics’. His couplet therefore is a reflection of his belief, ‘

The debate of assessing literature on the basis of romanticism or philosophical or characterization angles is an age-old phenomenon. This debate opens up vistas for education, thoughtfulness, social, economic and scientific angles also. Romanticism also touches upon sensitivity and inner feelings. So it can be judged from universal as well as local point of views. It is well known that the romanticism approach takes shape of quality literature. Questions are raised in the editorials of Tasteer, March 2003 and July 2010 as to when Urdu literature shall find its cultural and linguistic identity? Response was received from Dr. Rasheed Amjad, Nasir Abbas Nayyar, Rafiq Sindelvi, Abrar Ahmad, Zafar Sippal, Rawish Nadeem, Dr. Zia ul Hassan, Musharaf Alam Zoqi, Arifa Shahzad, Ahmad Sher Ranjha and Qasim Yaqub. The other issues debated upon in the editorials of Tasteer are literature, writer and society, nature, curriculum and comparative literature etc. Naseer Ahmad Nasir has given an innovative angle of opening debates on burning issues in literature by collecting the already published editorials and responses from his popular quality literary magazine in the form of the book Tanqeed Kei Naye Tanazur.