‘We will NEVER, ever surrender,’ Trump says in Georgia, as crowd chants ‘STOP THE STEAL’ 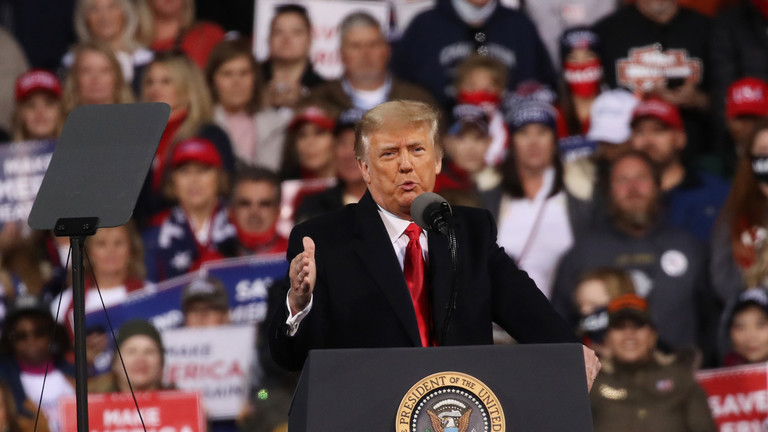 President Trump showed no sign of backing down in his fight over contested election results as he spoke at a rally in Peach State, where upcoming elections to the Senate will decide who gets a legislative majority in Washington.

Donald Trump has met his supporters in Valdosta, Georgia, in his first rally since election day, to support Republican senators David Perdue and Kelly Loeffler in the upcoming January election. That’s while the president himself is contesting results in the swing state, which has officially been called for Joe Biden. The former Vice President won the state by nearly 12,000 votes, according to certified results after recounts.

Trump, however, insists he won the election in the state, saying earlier he received “more LEGAL votes by far.”

President @realDonaldTrump: “You know we won Georgia, just so you understand.” pic.twitter.com/wTFWaZ6Ifd

He added that his opponents have “cheated and rigged” the election, as the crowd chanted “Stop the steal!”

“Your governor could stop it very easily if he knew what the hell he was doing!” Trump responded.

President Trump responds: “Your governor could stop it very easily if he knew what the hell he was doing!”pic.twitter.com/qhg2MHlSfo

Georgia’s Republican Governor Brian Kemp was not present at the rally, after president earlier criticized him over the handling of the election in the state. At some point during his speech, Trump asked congressman Doug Collins if he wants to run for governor in two years instead of Kemp.

Trump urged his supporters to vote for the Republican senators, adding that if they don’t, “the socialists and the communists win.” He added that he will “never, ever surrender.”

Should both candidates lose in January, the Senate would be balanced between 50 Republicans and 50 Democrats. In this case, presumed future Vice President Kamala Harris would cast the tie-breaking vote, putting the White House and both Houses of Congress in Democrat hands for the first time since 2011.

Former Vice President Joe Biden has been declared president-elect by the media days after the election took place. Despite Biden getting certified victories in enough states to claim the title, Trump continues to contest results in courts, claiming that “if you count the legal votes, I easily win.”