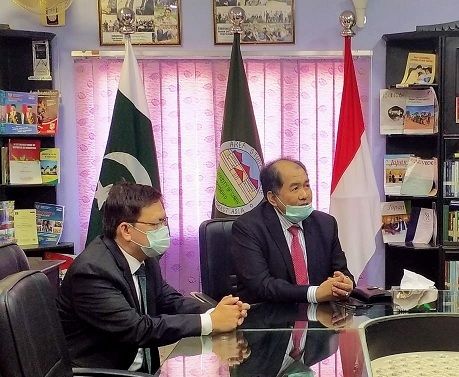 JAMSHORO: Consul general (CG) of Republic of Indonesia in Karachi Totok Prianamto has said that Pakistan and Indonesia are enjoying very close and cordial relations while both the countries are taking efforts to enrich people-to-people contact.

This he said while talking to faculty members and students during his visit to SU’s Area Study Centre here on Tuesday. He donated as many as 13 unique books written on different themes including art, culture and history of his country to the centre for already established Indonesian corner.

The CG further said that Indonesian Consulate in Karachi had very old and close academic cooperation with SU’s Area Study Centre and he also wanted to further strengthen the relations with it.

“Sindh University is the only institution of higher learning in Pakistan where Indonesian corner was established almost a year ago. Today, I have donated 13 books pertaining to art, culture, history and much more”, he said.

He added that due to COVID-19 pandemic, his consulate in Karachi could not carry out the planned academic activities in collaboration with ASC. However, he expressed the desire to initiate the same by the next year while seminars and workshops would be organized at ASC and Indonesian language courses and faculty exchange programs will also be held.

CG Totok Prianamto further said that he wanted to foster ties between academics, institutions, people and governments of the two countries as per mandate of his mission.