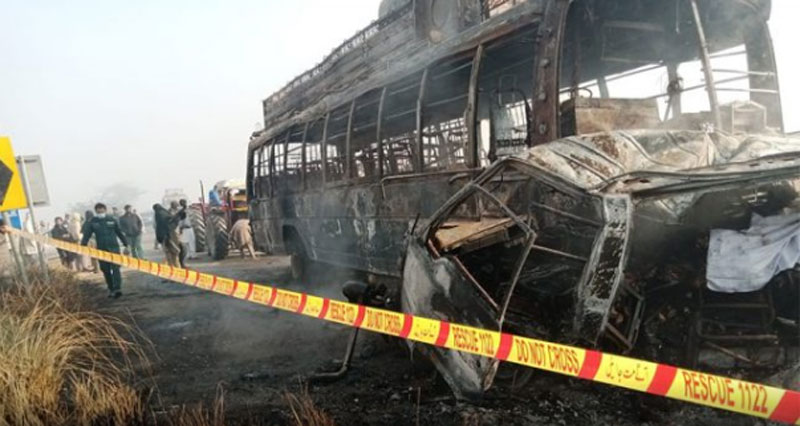 Thirteen people, including women and children, died and 17 others were wounded after fire broke out in a passenger bus and a van following their collision on Narowal Road near Narang Mandi on Monday.

Soon after the incident was reported, Rescue 1122 teams rushed to the spot and shifted the dead and the injured to a nearby hospital.

District Emergency Officer Rana Ejaz Ahmed said that the accident took place because of smog. “The bus collided with a Toyota Hiace van due to less visibility on the road,” he said.

Following the collision, the LPG cylinder in the van exploded setting both the vehicles ablaze, and as a result, several passengers suffered burn injuries, the officer said. The bus was travelling from Narowal to Lahore.

Punjab Chief Minister Usman Bazdar expressed sorrow over the loss of precious human lives in the traffic mishap and directed provision of the best medical facilities to the injured. He said that the administrative officers and elected representatives should monitor the assistance provided to the injured.