Heavy rains resulted in an added layer of suffering endured by the marginalized minorities of Sindh as well as the general people.

“The floods are worse than the lockdown due to Covid-19. At least we were allowed relief and ration bags in the latter. The situation right now is as bad as it can be. Although relief teams distributed dozens of plates from biryani daighs (rice pots), the food availability was insufficient for the area – thus creating quarrelsome chaos among the people” said a local of Umerkot, Sindh.

The people of Sindh, especially the underprivileged, have been battling the challenges appearing one after another. The province is home to 47.8 million people out of which almost 8 percent are Hindus. Sindh is also among the most poverty-stricken regions in the country where almost half of the population lives below the poverty line.

The Covid-19 pandemic affected the poor and marginalized communities in an inconsolable way. The poor lost their livelihoods. A few groups reached out to provide relief funds and donations to the localities in Sindh, but the masses at large were left struggling on their own.

Floods ushering in tragedy and thirst

In August 2020, when the Coronavirus cases finally started to settle down, heavy rainfalls began to wreak havoc. The torrential rains are said to have broken a record of 36 years. Those residing in the southern part of the province faced the worst impact of the rains when their houses and livestock were washed away leaving them with nothing- not even some safe drinking water.

Scarcity of potable water created an ironic picture of plight, one in which the people were dislocated, surrounded by water on all sides and parched due to its undrinkable quality.

The voiceless Hindus, belonging to the scheduled castes of Kohlis, Bheels and Meghwars, work on farms. Due to the floods , thousands lost their produce of chili and cotton crops, for which they had tirelessly toiled in the sun, tilling a land they don’t have ownership of. These marginalized communities were not in the shape to support themselves and had no option but to face the crisis that came. 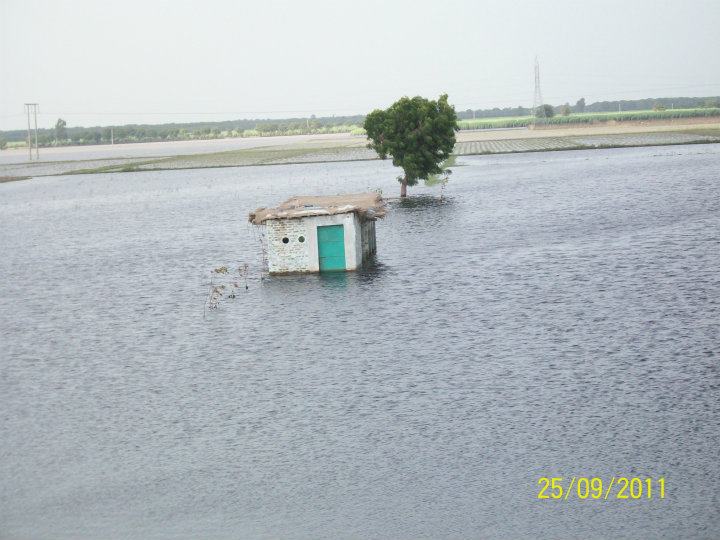 A population of almost 19 lac is affected in the areas of Umerkot, Mirpukhas, and Mithi. “The time of Coronavirus wasn’t this bad because at least we had a roof above our heads; we could go out in the streets and beg but now the shelter and means of living are both destroyed”, commented a resident of Umerkot.

Temporary support during the visit of political leadership

“When Bilawal Bhutto came to console us, we were given temporary tents and food but we met a painful degree of discrimination in the process. The supporters of the Pakistan People’s Party were given more food whereas some of the people weren’t attended at all. When the Chairman of the party left, the tents were also removed from above us”, the Umerkot resident continued.

After the flooding, the scenario is enormously challenging as there is no medical facility for the people to get proper treatment for skin diseases, infections, etc. which follow the trail of the torrential rains.
Besides losing homes and shelter sheds, the people of these affected areas grew disadvantaged as they lost their livestock too. Since the strict lockdown was imposed by the Government after the virus spread, people were mostly relying on their livestock. They were also counting days to the harvesting season of rice which falls from October till December, so they are able to feed themselves. “But everything looks bleak now”, in the words of a middle-aged woman, Nazia.

A farmer in Mithi elaborated about his struggle in the face of floods saying, “Our cows died because of the floods, we can’t harvest rice anymore, we lost our cotton crops as well. This means we can’t recover till next summer at least. And therefore, I can explain to you how this is a greater evil compared to the Coronavirus.”
The plight of these people grows by the day as there are no government or private facilities that can cater to their basic needs.

A middle-aged woman shed light on the current situation saying, “Our source of income was through selling fruits on roadsides. When COVID-19 hit Pakistan, times were difficult for us but we somehow managed to survive by taking loans from a few of the landowners in the area” and continues that “the present situation has made us homeless and pushed deep in debt.”

The emotionality in her style becomes more pronounced as she shares “the rains took away our homes, we can’t even protect our children from Malaria because there’s no shade or place for us. There are no hospitals or medical facilities where we can go for the most basic aids”, she said while shedding light on the scenario.
It has been weeks since the rains but the locals aren’t provided with medical care. The mosquito attacks were making it to the headlines, covering how it was killing animals and people. The situation was recently acknowledged by Pakistan Tehreek-e-Insaaf (PTI) Mirpurkhas President Mr. Aftab Ahmad Qureshi when he commented: “Mosquitos are the second biggest problem in the region after the water standing still in the area”.

The variables of survival for people living in these disaster-prone areas seem unpromising. They are struggling to keep the children and animals protected from infections and illnesses. Regaining stability seems far off for the villagers of rural Sindh; paying debts and re-starting harvest would take at least a year. As of now, they’re only living on relief efforts, sufficient to support just a fraction of the affected communities.

The article is produced by Ravadar – a blog series presenting lives of religious minorities in Pakistan.