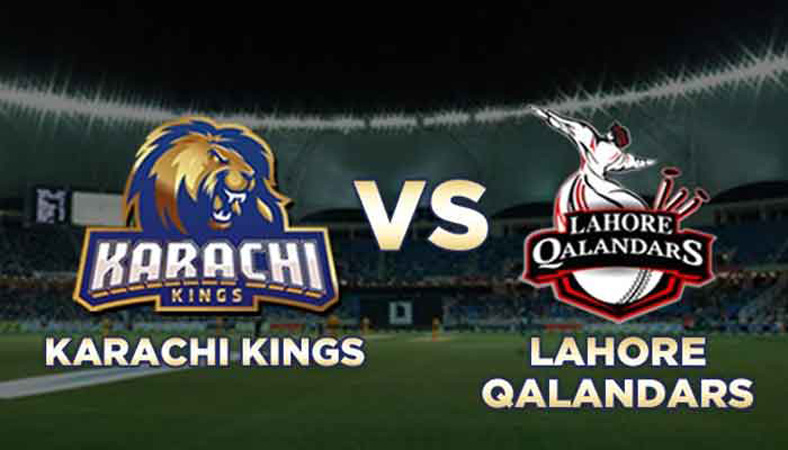 KARACHI: Lahore Qalandars will clash with Karachi Kings in a hi-octane final of the fifth edition of the HBL Pakistan Super League at the National Stadium Karachi here on Tuesday (today). After an eight-month Covid-19-enforced break following the end of the group-stage, the PSL playoffs began on Saturday with a thrilling Qualifier, between table-toppers Multan Sultans and Karachi. Karachi, helped by a stunning bowling performance of Mohammad Amir in the Super Over, held their nerves to book a place in the final. Lahore brushed aside Peshawar Zalmi by five wickets in the Eliminator 1 on the back of an unbeaten 74 by Mohammad Hafeez after which David Wiese’s all-round exploits helped the side, who had finished at the bottom of the table in each of the first four seasons, seal a berth in the final with a convincing 25-run win over Multan in Eliminator 2. This is the first time these two sides are featuring in a PSL final for the coveted and prestigious trophy.

Both sides flaunt top T20 cricketers who have played an integral role in their progression over the course of the tournament. Karachi’s Babar Azam dominates the chart for the highest run-getters. He sits at the top with 410 runs at a staggering average of 51.25. He has the most fifties in the tournament to date and his 48 fours are the most hit by any batsman in this edition. Babar also holds the distinction of being the highest run scorer in T20 cricket this year with 1,179 runs at 53.59. Alex Hales is another batsman who has been at his destructive best as he has stroked 261 runs at an average of over 52 and a strike rate just under 152. Mohammad Amir, fresh after delivering an immaculate Super Over, will spearhead Karachi bowling attack. With 10 wickets in a many matches, he is his side’s leading wicket-taker this edition. The left-arm pacer has an economy rate of 7.44.

Lahore’s pace attack is led by Shaheen Shah Afridi, who has had an impressive run in the shorter format in T20 cricket. The left-arm quick leads the list of bowlers with most wickets with 17 scalps at just 17.70 runs per dismissal and an impressive economy of seven. He is joined by pace-sensation Haris Rauf, who has the most T20 wickets – 50 at an average of 19.48 – in 2020. All-rounder David Wiese and Dilbar Hussain with 12 wickets each are locked at the fourth spot. Lahore boast a strong batting unit with Mohammad Hafeez, Fakhar Zaman and Ben Dunk –placed second, third and fourth, respectively, in the list of top run-getters this season. All three batsmen have scored two half-centuries. Hafeez has 310 runs at 44.28, while Fakhar has scored 298 runs at 27.09. Dunk, who has struck most sixes this edition (23), has scored 289 runs at a blistering strike rate of 175 and an average of over 41. The eagerly anticipated final that will determine a new champion is set to be watched and followed by millions of fans across the globe. Live streaming will be available on the official PSL YouTube channel in all regions outside Pakistan.

Both captains are eagerly looking forward to the historic occasion. Karachi captain Imad Wasim said: “It is going to be a big game. I am sure it is not only me, but players in both teams are excited for this contest. We played good cricket in the Qualifier but couldn’t finish it off how we wanted to but we are glad that we are in the finals. We are going to go out there express ourselves and I am hopeful we will win the trophy. We are going to play the final for Dean Jones who was a father-like figure in our dressing room and a great influence on our team. We want to dedicate the trophy to him, which is an additional motivation for the entire squad. We are really looking forward to what is our first PSL final.”

Lahore captain Sohail Akhtar said: “It’s a big achievement to reach the final. The belief that was there for five years has paid off. Our fans have stood by us for five years and now is the time to give them the best possible gift by winning the trophy. We will try to build on the momentum we have had and the key for success in the final will be to stick to the basics in both batting and bowling departments. Playing the final against Karachi in their own backyard is a massive occasion and I am sure it will have a huge following on TV and social media. We are really excited and looking forward to the game.”

History favours Karachi in the head to head between the two sides. Karachi and Lahore have met on 10 occasions in the PSL with Karachi winning six matches. Lhaore have won three matches plus have an additional victory under their belt, courtesy an exciting Super Over finish in a 2018 edition group-match played in Dubai. This edition, the two sides shared their two games with Lahore winning at home (Gaddafi Stadium) by eight wickets and Karachi recorded a crushing 10-wicket win at the National Stadium in the return group-stage fixture.